‘We had to persist’ 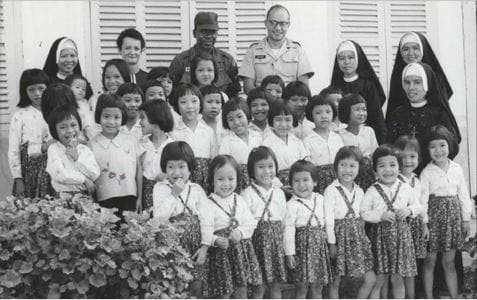 When the Boeing 707 carrying him to Vietnam touched down at Tan Son Nhut Air Base, James Donadio Jr., MD, didn’t have time to deal with jet lag from his 24-hour flight.

Instead, an Army sergeant pulled up in a jeep to greet Donadio and quickly ditched formalities. “Welcome to the war zone,” the officer said.

The chief of medicine who met him at the 3rd Field Hospital in Saigon was equally direct. “Glad to meet you,” the chief said. “You have a patient.”

A severely wounded soldier was slipping into kidney failure after exiting surgery. With the help of several nurses and corpsmen, Donadio hastily set up a dialysis machine to stabilize his patient. There would be no settling into his year-long stint as an Army physician. It was 1966, and the Vietnam War was ratcheting up in intensity.

“I didn’t have time to think about where I was,” said Donadio, a 1961 graduate of Indiana University School of Medicine and an Indianapolis native. “I just knew that I was in a very strange land.”

Donadio’s draft notice had arrived just three months before he was set to join the staff of Mayo Clinic in Minnesota as a nephrologist. He left his wife and four young children behind to supervise a newly created renal intensive care unit more than 8,000 miles away.

Five decades later, Donadio sifted through his memories and emotions to pen “From Mayo Clinic to Vietnam: Memoirs of a Physician Serving in the War.” The memoir details his work in the renal unit, where he cared for soldiers who suffered kidney failure as a result of devastating trauma sustained in combat.

The field of nephrology and use of dialysis were still in their infancy at the time, so there was no play book for Donadio and his colleagues to follow. When he returned to the United States, Donadio and his colleagues would publish about the management of kidney failure among military personnel in the Lancet, Annals of Internal Medicine, The Johns Hopkins Medical Journal, and other prominent journals.

Donadio’s tour, however, wasn’t entirely spent in the cocoon of the South Vietnamese capitol. In his spare time, Donadio ventured to small hamlets on the city’s outskirts, and helped care for children who’d lost their parents in the conflict at an orphanage run by Catholic nuns. He also flew north to the rugged terrain near the border region serving in forward hospitals caring for Marines who faced a steady onslaught of mortar and artillery fire.

“You saw a lot of young men in pain,” Donadio remembered. “And those doctors were doing all they could to keep them alive in what would be primitive conditions almost anywhere else.”

Meanwhile, life in Saigon was unsettling. In 1966, the Buddhist Uprising roiled the capital. A series of coups cycled eight leaders through the head of the government. “I had a little pit in my stomach every day,” he said.

To pass time, Donadio would play handball at the air base, or don civilian clothes and drive into the city center with a surgeon friend to visit with and photograph the steady stream of refugees that were fleeing the war-ravaged countryside. And he looked forward to receiving reel-to-reel tapes sent by his wife twice a month so he could listen to the sound of his children saying hello. “I played those tapes over and over again,” he said.

In the U.S., the debate about the war and whether America should be involved gained steam. For Donadio, glimpsing its toll up close left him conflicted, but not about the job he was brought across the Pacific Ocean to perform.

“We had to persist,” he said. “We had to take care of wounded and sick young men. It was devastating: death, amputations, and surgeons fixing holes. It just drove you crazy, but you had to do it.”

James V. Donadio Jr, MD, worked for 32 years as a nephrologist at the Mayo Clinic in Rochester, Minnesota, including nine years as chair of the Division of Nephrology. He served one year in Vietnam and finished his military commitment at Walter Reed Army Medical Center in Washington, D.C. For information or to order copies of his memoir, please visit www.donadiomemoirs.com.