A Pacifist Was Called to Serve in Vietnam 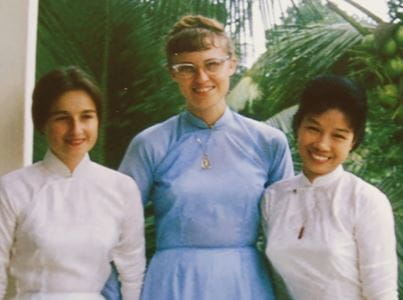 Trudging on a mountain pass with her feet blistered because of poor footwear, Marge Nelson, MD, asked God how this fit the plan for her.

A week earlier, North Vietnamese soldiers found her and a friend huddling in a bomb shelter in the city of Hue. The Tet offensive, launched in early 1968, had raged for days across the country, including through the ancient capital city. Scouring homes and hideouts, National Liberation Forces found the women, took them captive, and marched them into the jungle.

Nelson had only been in the country for four months as the first physician tasked to work at a rehabilitation clinic operated by the American Friends Service Committee in the Quang Ngai Province. A devout Quaker and ardent pacifist, Nelson spent her days treating patients who had lost limbs—often to landmines—and required prosthetics.

“I felt I had been called to do medical work,” said Nelson, a 1964 graduate of Indiana University School of Medicine.

Now, she was despondent.

Then she spotted a sign—a single white flower blooming along the roadside. In stilted Vietnamese, she asked a soldier the name of the flower. “Don’t eat it,” he said. “It’s poisonous.” While seemingly mundane, those brief words opened a conversation with Nelson—proof that perhaps her captors would be willing to engage in a conversation.

“Here was an opportunity to talk to the other side and explain that I was a pacifist and that I didn’t agree with the war,” she said.

Nelson grew up in Kokomo, Indiana and earned an undergraduate degree at Earlham College. Her goal was to pursue a career in nursing. But after a Sunday service, a physician and his wife told her she had the makings of a physician. “Can a woman do that?” she asked them.

Yes, she could. And along the way, Nelson sought to blend faith and work. In Philadelphia, where she completed her internship and residency, a colleague connected her with the founder of the hospital ship HOPE. So Nelson spent two months off the coast of Africa, a stint that inspired her to pursue a personalized residency in overseas health.

Just as that came to a close, the American Friends Service Committee sought her out. They were starting a hospital in Quang Ngai, located 500 miles north of Saigon but also a haven for communist forces. Would she like to go?

“You don’t know how much this answers my prayers,” she told them.

At 28 years old, she set off. The rehabilitation center was modest, taking up a small building at a province hospital. One side was a physical therapy center, the other was a prosthetic center, which made artificial limbs and braces as well as trained local people how to make them. “We never lacked for patients,” Nelson said, “except for Tet. Everyone wanted to go home for Tet if at all possible.”

So Marge took off, accepting a colleague’s invitation to visit Hue, which sat only 30 miles from the Vietnamese Demilitarized Zone. Poorly defended, communist forces quickly controlled it, and it would take a month-long siege—waged after Nelson’s capture—of house-to-house fighting for U.S. and South Vietnamese forces to take it back.

By then, the National Liberation Forces had marched Nelson and her friend deep into the jungle, where they were kept under the watchful eye of an officer named Nam. “We were given shoes, black shirts, and pants; as we had left Hue in our pajamas.  We passed our days chatting with soldiers.”

Her captors tried to persuade her that the U.S. and South Vietnamese cause was illegitimate. To Nelson, though, the legitimacy of force mattered little. She made her position clear. “I told Nam, ‘Teach me your word for pacifist,’” Nelson remembered. “I said, “I don’t agree with war. I think all of the soldiers on all of the sides should go home.  Then we should sit down and talk to solve our differences.”

In the middle of March 1968, it was clear the National Liberation Forces were making preparations to release Nelson and her friend. They were moved to another camp and asked to write release statements. Finally, on March 30, the women were released to a family in a village north of Hue.  They followed a path to Highway One and caught a bus back to Hue.  “It was a regular bus although there were some soldiers on the bus. None of them said anything to us.”

Despite the ordeal, Nelson was not ready to put Vietnam behind her. Back home in America, she told the American Friends Service Committee that she hadn’t finished her two-year contract and wanted to return to Vietnam. And she did.

“They only told me I had to go home,” Nelson said of the National Liberation Forces. “They didn’t say not to come back.”