Forced to Flee Vietnam, a Family Found a Home in Indiana 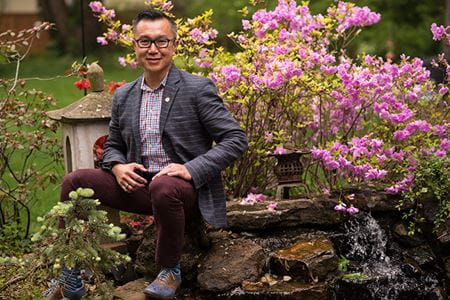 The 7-year-old boy stared out the window of a plane as one of the last flights from Saigon rose aloft and shuttled him across an ocean. Today, Nguyen is a semiretired anesthesiologist, adopted Hoosier and president of the Indiana University School of Medicine Alumni Association. In 1975, during the final moments of the Vietnam War, he became a refugee along with his parents and four siblings.

“We flew out that morning,” said Nguyen, a 1995 graduate of IU School of Medicine. “A few hours later it was the end of the war.”

U.S. military forces had exited Vietnam two years earlier in 1973 on the heels of a tenuous peace agreement, but the deal fell apart just months later. Over the two years that followed, North Vietnamese forces pushed toward the capital­—now known as Ho Chi Minh City. In the spring of 1975, communist troops gathered for a finishing blow in a war that claimed 1.3 million lives.

“I knew that was it for us,” Nguyen said.

As a boy, though, Nguyen never felt the war burst his bubble of tranquility. If violence like the Tet offensive, Buddhist uprisings or revolts against corrupt political leaders caused strife, Nguyen says he was too young to remember. The Nguyens lived an upper-middle-class existence in Saigon. His father, a former military officer, worked for American contractors during the war. His mother ran a boutique in a nearby market. The only daily reminder of the war was a warm one: Nguyen’s grandmother, who moved from the North to resettle with the family.

During the war’s final months, friends implored them to flee. If captured, Nguyen’s father faced almost certain execution. Meanwhile, his wife and five children would be packed off to re-education camps in the countryside. It was not until the waning days that the Nguyens decided to flee.

“The last few hours before we left, we packed up the house,” Nguyen said. “It was whatever you could throw in your suitcase. Other families had liquidated their assets. We just came over with the clothes on our backs.”

Even as a young boy, he knew the stakes if they stayed. “You just know you may die,” he said. “Or you may not have a house anymore. If you leave, you have a chance.”

The family settled in Brownsburg, Indiana, then a farming community of 5,800 people in Hendricks County and home to St. Malachy Catholic Church, which sponsored their asylum application. Nguyen’s father took a job at Burger Chef, while his mother started working in the cafeteria of what was then Wishard Hospital. It was a modest reboot. Nguyen and his siblings enrolled at St. Malachy’s parochial school.

“It was hard,” Nguyen said of parents’ assimilation process. “It was big things and little things, like not having the right ingredients to make food.”

And in Brownsburg, the Nguyens represented a war that claimed the lives of local fathers, sons, and nephews. “We just tried to keep to ourselves,” Nguyen said. “We studied hard. We worked hard.”

Over time, Nguyen and his family followed a familiar tale for immigrants. He went to Indiana University, where he studied chemistry, and then on to medical school. While at the IU School of Medicine, Nguyen thought he might leave Indiana for his residency. But once he settled on anesthesiology, he earned a slot at IU, which he considered one of the best residency programs in the country.

“That’s hard to turn to down,” he said. “Indianapolis also grew up a lot, too.”

Today, Brownsburg is a booming suburb, and his parents are respected elders in the local Vietnamese community, which now numbers close to 600. His older brother is an electrical engineer at Rolls Royce. One sister is an optometrist. Another sister is a stay-at-home mom. And the third works in human resources.

“I never wanted to be someone always looking for greener grass,” he said of staying in his adopted home. “I can lead the life I want to here and be the person I want to be.”