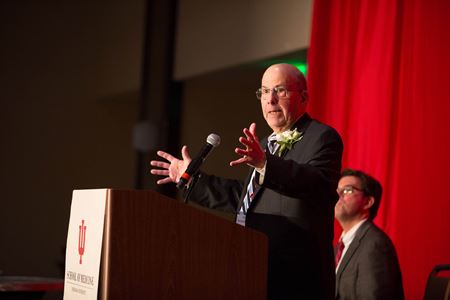 A common piece of advice for individuals, even those without hypertension, is to cut back on salt intake. The scientific basis for this is due to the pioneering work of Myron H. Weinberger, MD’63 who served on the IU School of Medicine faculty for over five decades. He and his colleagues, including Dr. Friedrich C. Luft and others at IU, worked in the Specialized Center of Research (SCOR) in Hypertension, one of five such centers supported by the NIH in the US. This incubator attracted scientists and fellows who pursued hypertension research throughout the world.

Weinberger began his research career at Stanford University, after completing his Internship and Residency in Internal Medicine at IU. He was the first to identify the high doses of estrogen in birth-control pills as a cause of hypertension in women. He developed one of the first radioimmunoassays to measure renin and aldosterone in blood that enhanced research in the field of sodium metabolism. This led to many new findings of the causes and treatments of hypertension. He was also one of the first to study the newly developed classes of drugs blocking components of the renin-angiotensin-aldosterone system, as well as other new antihypertensive drugs including calcium channel and beta blockers. Six additional NIH grants investigated newer aspects of these findings leading to reduction in heart disease and stroke.

“The cardiology division at IU has always used Myron as our authority on hypertension. He has given regular lectures on hypertension to the cardiology faculty and trainees,” said Harvey Feigenbaum, MD, Distinguished Professor of Medicine, who is widely recognized as the Father of Echocardiography. “We have literally been unable to replace him since his retirement.”

Dr. Weinberger directed the Hypertension Research Center, published over 250 peer-reviewed scientific papers and 25 books/book chapters, while conducting a busy referral practice treating hypertensive patients from the US and Europe.

To longtime friends and colleagues, Dr. Weinberger’s impact is even more extraordinary given the fact that he was born profoundly deaf and learned to read lips as well as books by the age of 4. In the third grade he obtained a hearing aid and embarked on a lifetime of adaptation, determined to become a physician despite repeated advice that it would not be possible.

“This disability did not deter his august achievements, and one must conclude that his achievements are even more remarkable by way of his perseverance and dedication to overcome any handicap to achieve academic excellence,” said Robert W. Holden, M.D., Dean Emeritus of the School of Medicine.

Dr. Weinberger was honored during the 71st Annual Strawberry Shortcake Luncheon on Saturday, May 19, 2018 in Indianapolis.

Submitting a nomination for any of the four IU School of Medicine Alumni Association awards is simple. Tell us who you are, who you are nominating, and why this individual is deserving of an award. Nominations are due by Friday, November 2, 2018.