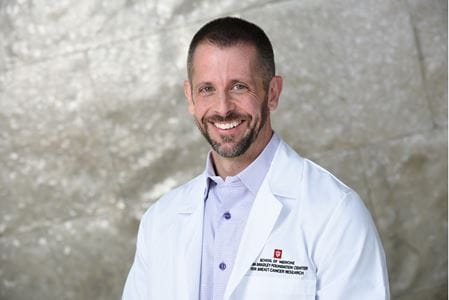 INDIANAPOLIS – Indiana University School of Medicine physician scientist Bryan Schneider, MD is the principal investigator of clinical trial BRE12-158, a randomized clinical study published in the prominent Journal of Clinical Oncology the primary goal of which was to compare survival in women with high-risk (those who did not fully respond to chemotherapy prior to surgery) triple negative breast cancer (TNBC) with a genomically directed therapy versus standard of care.

The study found that in the adjuvant (following chemotherapy and surgery) setting, a single genomically directed therapy was not better than a current standard of care option, which was capecitabine.

“Although this study did not prove genomically directed therapy was significantly superior alone, it did provide many advances for the treatment of high-risk triple negative breast cancer. We are thankful for the 200 patients and study teams across the United States who participated in this trial,” said Schneider, a researcher at the Vera Bradley Foundation Center for Breast Cancer Research at the IU Melvin and Bren Simon Comprehensive Cancer Center; also the location where the lab research portion of this study was conducted.

Until 2015, no therapy, in the adjuvant setting had been shown to improve outcomes for patients with TNBC. This study showed that therapy (both the targeted therapy and the standard therapy option capecitabine) was markedly better than no therapy at all.

Twenty percent of patients who were in the study did not receive therapy of any kind, in the adjuvant setting, for the treatment of their high risk TNBC. “We found that despite a study from 2015 which showed capecitabine was superior to receiving no therapy in patients with high risk TNBC, some were still receiving no therapy,” said Schneider. “When we observe a finding like this in a clinical study, experience shows us that in the real world, the numbers are actually much higher. Hopefully, these findings will further support that all patients with high risk TNBC in this setting will be considered for additional therapy as deemed appropriate by the treating oncologist.

This study also found that race did not appear to impact outcomes in this high-risk population. “This finding shows that the biology of TNBC is incredibly important and clinical trials should be focused in settings where disparate outcomes are most prevalent,” said Schneider.

Schneider also presented these findings as part of a spotlight session at the December 7-10, 2021 San Antonio Breast Cancer Symposium, an international scientific exchange among basic scientists and clinicians, working in breast cancer.

Clinical study BRE-158 has yielded an important discovery and provided valuable findings for oncologists and patients with triple negative breast cancer, said Tatiana Foroud, PhD, executive associate dean for research affairs at IU School of Medicine and leader of the IU Grand Challenge Precision Health Initiative. Results from this study, which are being published in prestigious journals read around the world, are doing what we promised to do, advance treatment options for patients with this terrible disease.”

An initial discovery from clinical study BRE12-158  was published in JAMA Oncology. Schneider and his colleagues found that circulating tumor DNA (ctDNA) found in a patient’s blood, in the adjuvant setting, is a marker for residual disease; meaning patients who test positive for ctDNA are much more likely to have disease recurrence than those who test negative for ctDNA.

“Circulating tumor DNA status remains a significant predictor of long-term outcomes in these patients,” said Schneider. It should be used to stratify patients in cancer clinical trials moving forward.”

The findings from BRE12-158 provided the needed rationale to launch the PERSEVERE  (BRE18-334) trial, which tests genomically targeted therapies in combination with capecitabine. PERSEVERE has now opened with four patients in the study. Using ctDNA technology, PERSEVERE is enrolling and following ctDNA-positive and negative patients. “Our hope is that these patients will continue to do well, enabling us to design future clinical trials of personalized therapy or no therapy that will further improve quality of life,” added Schneider.

Study BRE12-158 was funded by the Vera Bradley Foundation for Breast Cancer in Roanoke and the Walther Cancer Center. BRE-158 is part of the Indiana University Precision Health Initiative Grand Challenge. The study was managed by the Hoosier Cancer Research Network and enrolled at 22 clinical sites across the United States.