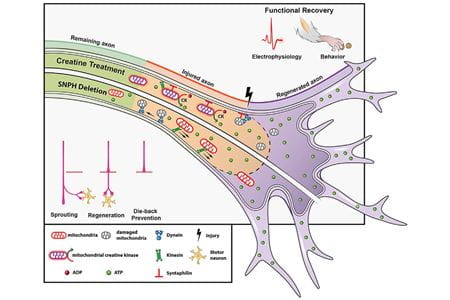 INDIANAPOLIS—Each year, thousands of people in the United States experience a spinal cord injury, damaging the system of nerves that the brain and body use to communicate.

A team of researchers from Indiana University School of Medicine, in collaboration with the National Institute of Neurological Disorders and Stroke, have investigated how boosting energy levels within damaged nerve fibers or axons may represent a novel therapeutic direction for axonal regeneration and functional recovery.

Xu, whose lab at IU School of Medicine is supported both through the NIH and the U.S. Department of Veterans Affairs, said researching the connection between cell energy and potential regeneration is a new direction for spinal cord injuries.

When a person suffers from a spinal cord injury, the axon, or nerve fibers, regenerate poorly, often leading to neurological impairment and eventual motor paralysis. In this study, Xu`s group found that the injured axons fail to regenerate due to energy deficits and disfunction in mitochondria—the power supply of the cell.

Xu said he hopes the strategy could be translated into future treatments of the injury.