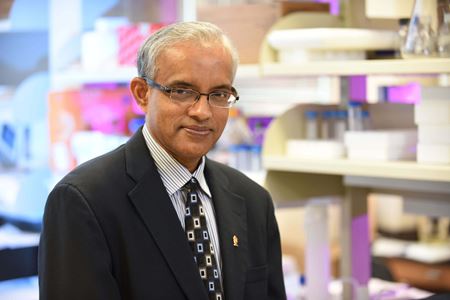 A team of investigators helmed by Dr. Rajan Gogna from the Champalimaud Centre for the Unknown in Lisbon, Portugal, were leaders on the study, which was supported by research from Indiana University School of Medicine’s Harikrishna Nakshatri, PhD, the Marian J. Morrison Professor of Breast Cancer Research and Professor of Surgery, along with Taylor M. Parker, a graduate student in his group. Nakshatri is a researcher with the IU Melvin and Bren Simon Cancer Center, and the Vera Bradley Foundation Center for Breast Cancer Research.

The research stems from previous studies done on Drosophila, commonly known as fruit flies, showing that a direct fitness-based selection process is used to eliminate viable but impaired cells. According to Nakshatri, this study was aimed at discovering whether or not a similar selection process takes place in humans, and if it potentially could play a role in the development of cancer.

“We were asking the question: How do cancer cells communicate with normal cells in their immediate vicinity? This study tells you that not only do these cells grow on their own, but they can actually kill the cells that are normal. And this killing is after recognition of normal cells as losers after a long standoff and recognition of cell fitness on both sides,” Nakshatri said. “How do they do that?”

“Tumors are not one cell type. There are multiple cell types. Some of them are big brothers. We want to know how does it get this big brother attitude?” Nakshatri said. “Not only do they grow fast, but they kill the other cells that are next to them. They are bullies.”

Samples of normal cells, supplied through the Susan G. Komen Tissue Bank, were used in the study to show that tumor cells that have a high expression of the “winner” form tend to grow more in areas where normal cells express the “loser” form. In this study, breast and colon cancers were tested. However the implications from this study could sweep across all forms of cancer. According to Nakshatri, the study shows that if you can eliminate the bully isoform, the tumors become more sensitive to chemotherapy.

“It’s not been extended to many cancers yet, but when it’s been tested it’s been proven,” Nakshatri said. “The next step will be to find something to block the function of this ‘winner’ isoform. Can we come up with a small molecule to block that interaction, so that nobody will become dominate? Then we can come up with a drug that can kill everything.”