IU School of Medicine graduates physicians, scientists in Class of 2019 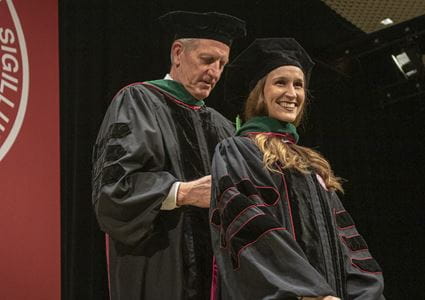 Some 439 physicians and scientists strode across the stage and on to the next phase of their professional careers Friday, May 10, during Indiana University School of Medicine’s 2019 graduation recognition ceremony.

The school’s commitment to improving the health of all Hoosiers was on display, as 114 of the newly graduated physicians will continue at least part of their medical training in residency programs throughout the state.

Jennifer Walthall, MD, MPH, Secretary of the Indiana Family and Social Services Administration, delivered the keynote address. The scene was a familiar one for Walthall—an IU School of Medicine graduate and adjunct clinical professor of emergency medicine and pediatrics who previously served the school as division chief of pediatric emergency medicine.

During her address, Walthall recounted her experiences during her own commencement ceremony—35 weeks pregnant, newly matched in a combined emergency medicine and pediatrics residency program, and unsure of what the future had in store.

“There is one thing I know—I would never have dreamed 19 years ago that I would be on this side of the podium with you,” Walthall said, touting the promise that awaits the new physicians in their professional careers. “You probably hear every day, the [electronic medical record] is not patient-centered, the health care delivery system is broken, the burden of student debt is too high, but I believe that there is no better time than now for you to be a physician. We have reached a tipping point and you—each one of you—are the answers to making it a better time to practice medicine than any time in the past.”

Among those future change makers touted by Walthall was Nathanael D. Moore, MD, who addressed his classmates during the ceremony. He challenged his colleagues to maintain their sense of imagination and to be an advocate for patients throughout their careers.

“Health care isn’t just about diagnoses and therapies,” he said. “It’s about how our patients access and afford their care—and how their children access their care. It’s about doing research, whether at the bench or in a spreadsheet, and pushing medicine forward. It’s about putting pen to paper, calling attention to inequities and recording the incredible stories of our patients. It’s about so many different things that each of us may be uniquely equipped to handle.”

Along with the traditional hooding ceremony, the group of new physicians was led by IU School of Medicine Dean Jay L. Hess, MD, PhD, MHSA, in reciting the Physician’s Oath, in which graduates pledged to approach their jobs as healers with humbleness and awareness, and to always consider the health of their patients first.

“You have been blessed by the opportunities that a career in medicine offers,” Hess told the graduates. “I hope you will remember to express your gratitude to all the people who made that possible by paying it forward. I hope that wherever you go throughout your careers you too will be a source of inspiration and encouragement for the people around you—your colleagues, your patients. If you do that, you will have lived lives rich with meaning and purpose.”

IU School of Medicine is the largest medical school in the United States and is annually ranked among the top medical schools in the nation by U.S. News & World Report. The school offers high-quality medical education, access to leading medical research and rich campus life in nine Indiana cities, including rural and urban locations consistently recognized for livability.