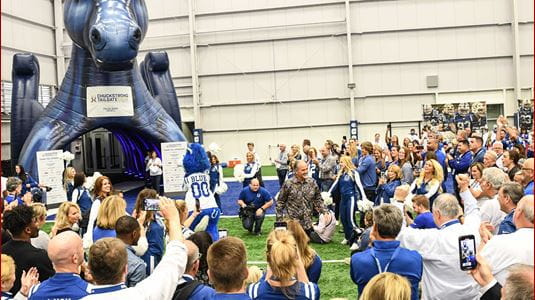 INDIANAPOLIS — On a night when Chuck Pagano returned to Indianapolis, Colts owner Jim Irsay pledged $1 million to cancer research in his former coach’s honor, helping to raise more than $1.8 million to support scientists at the Indiana University Melvin and Bren Simon Cancer Center.

Colts Chief Operating Officer Pete Ward made the announcement on Irsay’s behalf during the 2019 Chuckstrong Tailgate Gala. The total set a record for the eight-year-old fundraising campaign that began when Pagano was diagnosed with leukemia during his first season with the Colts.

“Amazing,” said Pagano, now defensive coordinator for the Chicago Bears. “I’m not surprised, because I know the man that he is. He has a heart of gold, and I’m just so, so grateful. When I was sick and going through what I was going through, he stood by me. I know a lot of people who wouldn’t have done that, and he continues to do that today.”

Co-hosted by the Indianapolis Colts, former Colts punter Pat McAfee and Eddie White of the Indiana Pacers and presented by Faegre Baker Daniels, the tailgate gala raised money for cancer research through corporate sponsorships and live and silent auctions.

Gary and Carol Edwards, owners of DEEM mechanical and electrical company, also led giving with a $250,000 challenge gift. Their donation was in honor of Nicole Richards, a local woman who became paralyzed after an accident and later battled breast cancer.

To date, the Chuckstrong initiative has raised more than $7.3 million for cancer research at IU.

“Some things supersede rivalries on the field, the final box score or even a man-made trophy. These are the virtues that make mankind unique,” Loehrer said. “The virtues, generosity, compassion and the intense desire to leave this world a better place than when you entered it, that’s the stuff of Chuck Pagano.”

Ward, who co-chairs the gala, added: “Chuck and Tina will always be members of the Colts family, and our support of Chuckstrong goes way beyond football. Chuck’s battle to beat cancer touched millions across Indiana and the world and truly made a difference in the lives of so many. We’re honored to welcome back the Paganos and to be a part of this effort to bring support and hope to those engaged in their own fight against cancer.”

Before the tailgaters turned their attention to the serious business of raising money, they took part in such fun Chuckstrong combine activities as catching a punt and running a 40-yard dash with Colts players.

Tailgaters also had the chance to see cancer research in action at the science station, where they could look at a cancer cell under a microscope and try their hand at carefully measuring liquid into a pipette—a slender tube used to transfer liquid from one container to another.

To learn how to contribute, visit https://cancer.iu.edu/chuckstrong. 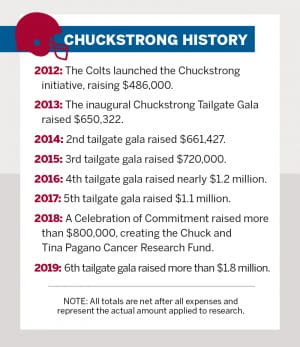