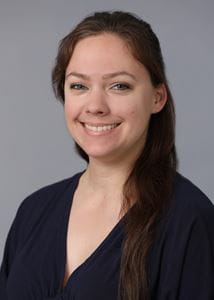 Jennifer Martynowicz is an MD/PhD student in the IU School of Medicine Medical Scientist Training Program.

A mind-altering parasite often picked up from the family cat might have met its match.

Researchers at Indiana University School of Medicine have discovered a drug commonly used to treat hypertension could also be used to reverse the effects of Toxoplasma gondii—a single-celled parasite that infects about a third of the world’s population and can cause severe neurological effects. The findings were recently published in the journal “mBio” and could have a major impact on how doctors currently treat brain infections.

Toxoplasma gondii does not usually produce obvious symptoms and is often found in cats—using the feline to complete the sexual stage of its life cycle. When contracted by humans—often through contact with cat feces or consuming poorly cooked meat or contaminated water—latent toxoplasmosis has been associated with serious neurological disorders including schizophrenia, intermittent explosive disorder and suicide.

The study was led by IU School of Medicine MD/PhD student Jennifer Martynowicz, who is beginning her sixth year in the Medical Scientist Training Program. Researchers found a drug called guanabenz significantly reduces the number of brain cysts in an infected mouse strain called BALB/c. With a cyst-reducing drug in hand, Martynowicz tested the idea that changes in behavior observed in infected mice depend on the quantity of parasite cysts in the brain.

“We were able to reverse a behavior change that occurs during chronic infection,” said Martynowicz. “Mice infected with latent toxoplasmosis are hyperactive, but when treated with guanabenz, their activity level returns to normal.” 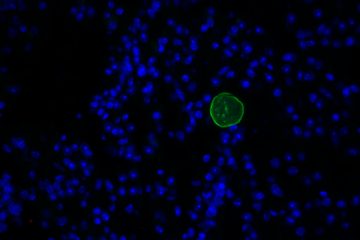 Next, the team infected a different mouse strain called C57, which is much more susceptible to Toxoplasma infection. In this mouse strain, guanabenz was not able to stop the infection or lower cyst counts, but was still capable of reversing the hyperactive behavior seen in infected mice. This finding implies that the hyperactivity in infected mice does not correlate with the number of parasite brain cysts.

Researchers believe that guanabenz, which is already FDA-approved to treat hypertension, is a promising drug that could be repurposed as a new anti-parasitic drug. This work stems from previous discoveries made by the Bill Sullivan, PhD and Ronald Wek, PhD laboratories.

“To discover a drug that reduces tissue cysts and reverses one of the behavioral changes caused by the parasite is a significant step forward,” Sullivan said. “But Jen’s work also underscores the importance of genetic differences in host immunity. Much more work is needed to understand the complex interaction between Toxoplasma and the immune response.”

Read the full publication in mBIO.

Read the full press release from the American Society for Microbiology.