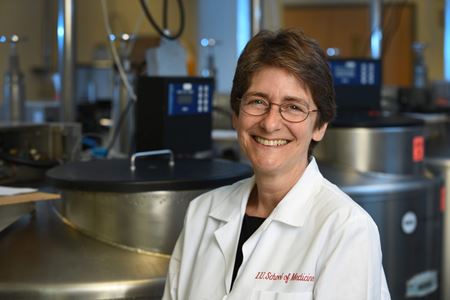 With a grant from the National Institute of Health’s National Institute on Aging, Indiana University School of Medicine will dramatically increase the size and scope of the biobank that stores DNA and other biological samples used by researchers globally to better understand, treat and hopefully cure Alzheimer’s disease. The grant is expected to last three years and total $12 million pending the availability of funds.

“Anticipating increased need for a central national biobank resource, this award aims to boost the capacity of our national biobank so it can continue to facilitate both withdrawals and deposits, provide cutting edge centralized resources with efficient processes for reviewing requests and assure that precious research resources are used wisely,” said Nina Silverberg, PhD, director of the Alzheimer’s Disease Centers Program at the NIA.

The expanded IU biobank – the National Centralized Repository for Alzheimer’s Disease and Related Dementias – will play a central role in the effort to reach the national goal of developing effective prevention and treatments for Alzheimer’s disease and related dementias by 2025. It’s estimated that there will be 8.4 million Americans aged 65 and over with Alzheimer’s disease by 2030, up from about 5.5 million now.

“We’re centralizing resources at Indiana University to make it easier for scientists from around the world to share and to access these critically important biological samples for ongoing and new research, ” said Tatiana Foroud, PhD, director of the repository and chair of the Department of Medical and Molecular Genetics at IU School of Medicine.

The expansion also will create an NIA-funded centralized repository that will collect and distribute induced pluripotent stem cell lines created by scientists to study Alzheimer’s disease and related dementias. Induced pluripotent stem cells are created by taking cells from adults – frequently skin cells or blood cells – and activating genes that return the cells to a stem cell state. At that point, the cells are “pluripotent,” meaning they can be coaxed by scientists to differentiate into many types of cells, such as various neurons found in the brain. Jason S. Meyer, PhD, an associate professor of biology in the IUPUI School of Science, will serve as a co-investigator who is leading work related to induced pluripotent stem cells.

To accommodate the expansion, the National Centralized Repository for Alzheimer’s Disease and Related Dementias will move into larger, newly renovated facilities in Indianapolis.

Since its creation in the early 1990s, the repository has collected more than 500,000 samples. With the additional Alzheimer’s disease research funding, it is expected that the biobank will receive 300,000 additional specimens in just three years, said Foroud, the Joe C. Christian Professor of Medical and Molecular Genetics.

One of the primary goals of research using the repository’s resources is to identify diagnostic signals – called biomarkers – for Alzheimer’s disease. The Alzheimer’s disease process begins years before symptoms appear, so scientists hope to develop convenient and inexpensive biomarker tests that would identify problems early. Current experimental methods for early detection, such as PET scans and tests using cerebrospinal fluid, are expensive and invasive.

“What we really want to develop is a blood-based test. You would simply draw a sample of blood and run tests that predict whether an individual is at increased risk for Alzheimer’s disease or a related dementia, or that would tell you that symptoms are developing,” said Foroud.