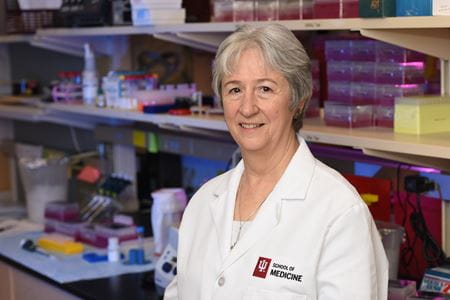 Exercise causes muscles to produce a chemical signal that helps prevent bone damage, but as bones age they start losing their ability understand that signal, a research team led by Indiana University School of Medicine scientists has found.

The discovery may help explain why people are more susceptible to bone loss as they age. It may also lead to interventions that work around, or even prevent, older bones’ inability to recognize the signals the muscles are sending – one of which might just be more exercise.

The research team, led by Lynda F. Bonewald, PhD, director of the Indiana Center for Musculoskeletal Health, discovered that a metabolite produced by muscles during exercise – known as L-BAIBA – helps protect osteocytes, the bone cells that oversee bone health, repair and renewal. But, the researchers reported in a recent edition of the scientific journal Cell Reports, as the osteocytes age they lose their ability to respond to L-BAIBA.

The culprit, the researchers found, is the receptor on the membranes of osteocytes that interacts with the L-BAIBA molecules produced by the muscles. Experiments using mice as well as muscle tissues in the lab, demonstrated that both younger and older muscle tissues produced L-BAIBA. However, examination of younger and older bone tissues revealed that the receptor needed to interact with L-BAIBA was largely missing in the older osteocyte cells.

“If you’re a young person and you exercise you get the benefits. You get good increase in muscle, you get good increase in bone, the whole bit,” said Dr. Bonewald, professor of anatomy & cell biology and of orthopaedic surgery. “As we age you have less of an effect of exercise. We’re losing expression of that receptor in our bone, and that’s likely one reason why our bones don’t respond as well to exercise.”

Having identified the role of L-BAIBA, the researchers then asked, just how does the presence of the metabolite protect the osteocytes in the bone?

That answer is in the mitochondria, tiny organelles – mini-organs – inside cells that play key roles in cell function, such energy production and cell division. Mitochondria are susceptible to breakdown by free radicals, or reactive oxygen species, that are more prevalent in the body as people age. L-BAIBA prevents the breakdown caused by the free radicals, and thus protects the osteocytes, the researchers found.

The discoveries suggest potential routes to therapies that might counteract the changes that reduce the protective effects of L-BAIBA, Dr. Bonewald said. That could include alternative methods for blocking the destructive effects of free radicals on the mitochondria.

“We think if we can keep the mitochondria healthy we’ll keep the osteocytes healthy,” she said.

In addition, experiments now are under way to see whether continued exercise in older mice can help maintain production of the receptor that was missing in the older osteocyte cells.

“As they age mice become more and more sedentary, just like humans do, so if we can keep them active maybe we can level out that receptor expression,” Dr. Bonewald said.

Discussions have begun with researchers who conduct clinical trials, such as exercise studies in people with osteoporosis, to develop ways to measure levels of L-BAIBA in humans. That could lead to a variety of clinical trials testing new ways to protect the integrity of bones as people age.