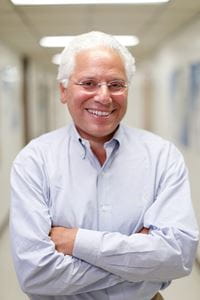 BLOOMINGTON, Ind. — Indiana University Distinguished Professor Richard D. DiMarchi is ranked No. 3 among the world’s top translational researchers by Nature Biotechnology, a monthly journal focused on science and business within the industry.

This marks consecutive years that DiMarchi, one of the world’s leading peptide chemists, has appeared among the list’s top five inventors. The latest rankings, which appear in the journal’s October 2016 edition, are based on the number of patents granted annually according to IP Checkups, a Berkeley, California-based firm that analyzes filings at major patent offices worldwide.

“It’s always good to be recognized for one’s efforts, and to some extent that is what these lists reflect — the volume and variety of approaches that a number of scientists and inventors worldwide are considering to treat or eradicate illness and disease,” DiMarchi said.

“But the ultimate goal is to cure or effectively treat conditions that disrupt the lives of people throughout our nation and the world. If just one of these patents — obviously we hope it’s many, many more — but even if just one patent were to help achieve that objective, that’s where victory lies. Not only for scientists such as myself, but for the teams of talented researchers and colleagues who dedicate so much time and effort to these endeavors.”

DiMarchi’s inventions are part of a surge of increased patent activity recently generated through the Indiana University Research and Technology Corp., which protects, markets and licenses intellectual property developed at IU so it can be commercialized by industry.

Throughout more than three decades of discovering, developing and manufacturing new drugs, DiMarchi has been a prolific contributor to IU’s research enterprise, its academic mission and the greater scientific community, said IU Vice President for Research Fred H. Cate.

“These recent rankings certainly reflect Richard’s tireless efforts to address some of society’s most pressing public health challenges. Yet they are also part of the pioneering research driven by the many world-class scientists and inventors who call IU home,” Cate said. “Each day, their innovative efforts transform lives here and around the world and serve to reaffirm IU’s standing as one of the world’s leading universities.”

During the 2015-16 fiscal year, IURTC saw a record 53 patents issued through the U.S. Patent and Trademark Office, up 29 percent over the prior year, and 112 additional patents were issued globally through 35 different nations or administrative regions. IURTC also executed 46 licensing agreements, up 84 percent over the previous year, with licensing revenue topping $7 million.

In a recent report by the National Academy of Inventors and Intellectual Property Owners Association, IURTC ranked 43rd worldwide in U.S. utility patents granted in 2015. IU ranks 37th among the world’s 100 most innovative universities according to a Reuters News analysis of patent and publishing data between 2009 and 2014, up 12 spots from 49th a year ago.

“Our work at IURTC enhances the academic and research missions of our entire university, and Richard’s endeavors have been a huge part of that, not only as a scientist, but also as an entrepreneur,” IURTC President and CEO Tony Armstrong said. “When you see where he falls within these rankings for the biotech community, you get a sense of the scope of his accomplishments. They hardly tell the whole story, but you get an idea of his impact on the field.”

An expert in peptide chemistry, biochemistry and pharmacology, DiMarchi serves as the Linda and Jack Gill Chair in Biomolecular Sciences and the Standiford H. Cox Professor of Chemistry in the IU Bloomington College of Arts and Sciences’ Department of Chemistry, where he previously served as department chair.

A highly respected international authority in the discovery, development and manufacture of new drugs, DiMarchi joined IU in 2003 after 22 years as a senior research scientist at Eli Lilly and Co. He discovered Humalog at Lilly Research Laboratories and contributed to the development of a number of peptide and protein-based medicines, including Forteo, rGlucagon and Humulin, which annually sell in excess of $5 billion.

DiMarchi holds more than 100 patents and has co-authored more than 150 scientific papers. He is co-founder of the IU-initiated Marcadia Biotech, purchased by Roche in 2010; Calibrium LLC, purchased by Novo-Nordisk in 2015; and additional biotech companies such as Ambrx, Assembly Biosciences and MB-2.

About IURTC: IURTC is a not-for-profit corporation tasked with the protecting and commercializing of technology emanating from innovations by IU researchers. Since 1997, IU research has generated more than 2,700 inventions resulting in over 4,100 global patent applications being filed by IURTC. These discoveries have generated more than $135 million in licensing and royalty income, including more than $112 million in funding for IU departments, labs and inventors.