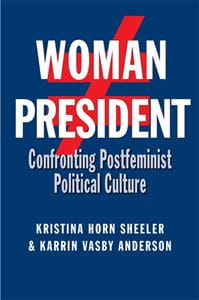 INDIANAPOLIS — Two national professional organizations have named an IUPUI professor and her Colorado State University co-author recipients of top awards in recognition of their book about women and the quest for the U.S. presidency.

Sheeler and Anderson, professor of communication studies at Colorado State University, are also recipients of the Organization for the Study of Communication, Language and Gender’s 2014 Outstanding Book Award.

“We are honored to receive these significant awards,” said Sheeler, who teaches in the School of Liberal Arts at IUPUI. “Recognition of this important scholarship on gender and the presidency is one step toward imagining a woman as president. It is not as simple as advising women to run differently; as a culture, we must shift the conversation to include the cultural barriers competent women face when running for executive level office.”

In “Woman President: Confronting Postfeminist Political Culture,” Sheeler and Anderson discuss the U.S. presidentiality as a unique rhetorical role, reviewing women’s historical and contemporary presidential bids with special emphasis on the 2008 campaign. They also consider how presidentiality is framed in candidate oratory, campaign journalism, film and television, digital media and political parody, all to answer the question “What will it take for a woman to be elected as U.S. president?”

The co-authors argue that “one of the most intransigent barriers to the election of a woman president is the persistence of a broad cultural backlash against female presidentiality” that can be seen in political and popular culture.

Sheeler and Anderson received funding for their research as co-recipients of the Carrie Chapman Catt Prize for Research on Women in Politics.

The women will be honored during an award ceremony Nov. 22 at the National Communication Association’s 100th annual convention in Chicago.

As National Communication Association award recipients, Sheeler and Anderson “join a venerable group of scholars and educators who have been honored for achieving excellence in research, teaching and service,” association president Kathleen Turner said in the award letter to the co-authors.

Sheeler and Anderson have also been invited to attend an award celebration during the Organization for the Study of Communication, Language and Gender convention Oct. 16 to 19 in the San Francisco area.

The organization seeks to provide a forum for professional discussion, presentation of research and demonstration of creative projects in the areas of communication, language and gender, and to promote recognition of those doing work in this area.

“The committee had glowing things to say about your book and the decision to award you winner was unanimous,” Rachel E. Silverman, organization Book Award Committee chair, said in an award letter to the co-authors.