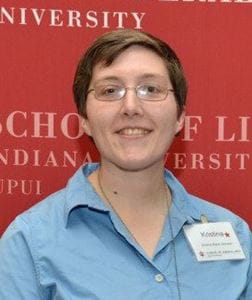 INDIANAPOLIS — An IUPUI alumna recently received a prestigious national award for a project helping to open the world of cultural arts to people with disabilities.

Kristina Johnson, a 2013 museum studies graduate in the School of Liberal Arts at Indiana University-Purdue University Indianapolis, is the recipient of a Kennedy Center Leadership Exchange in Arts and Disability Award in recognition of her work with AccessIndy.

Part of IUPUI’s Cultural Heritage Research Center, AccessIndy is a program designed to unite museum and cultural arts professionals as they work toward improving access and inclusion within their organizations. In addition to developing a Web-based resource library, AccessIndy has been offering a series of roundtable discussions for museum and cultural professionals about access and inclusion in the Indiana arts.

“I had discovered NYC’s Museum Access Consortium at the (2012) LEAD conference and used that group as a model for what we’re doing in Indianapolis,” Johnson said. She also credits conference presentations by Betty Siegel, president emeritus of Kennesaw State University, and Lynn Walsh, manager of guest access and inclusiveness at Chicago’s Children Museum, as inspirations for AccessIndy.

Leadership Exchange in Arts and Disability Awards are given to “outstanding arts administrators and institutions whose leadership and work furthers the field of accessibility.”  Johnson was one of four recipients honored during the 14th annual LEAD conference held Aug. 1 to 6 in Chicago.

“To the extent that a LEAD Award recognizes not just impact in the community, but outstanding professionals in the field, I can think of no more deserving recipient than Kris Johnson,” said Elizabeth Kryder-Reid, associate professor of museum studies and director of the Cultural Heritage Research Center. “Her work in Indianapolis is a classic example of what happens when seeds are planted in fertile ground. … It has been a catalyst for sharing information across institutions and for individual organizations to build their capacity to be more inclusive and accessible to all audiences.”

Johnson launched AccessIndy in November 2012. She plans to expand the program as a statewide resource for all cultural arts professionals in Indiana and continue promoting the program as a model for other regions across the U.S.

The LEAD Award “is probably the most meaningful award I could have received because it’s a big ‘thumbs up’ from people whom I deeply admire and validates that I’m on the right track in my career,” Johnson said. “That being said, I’m not doing this work all by myself. I have the support of the Cultural Heritage Research Center, the museum studies program, the Indiana Arts Commission and many museum professionals in Indianapolis. I see this award as a spotlight on Indy as an emerging epicenter of progress in the movement to broaden access and inclusion in the cultural arts.”