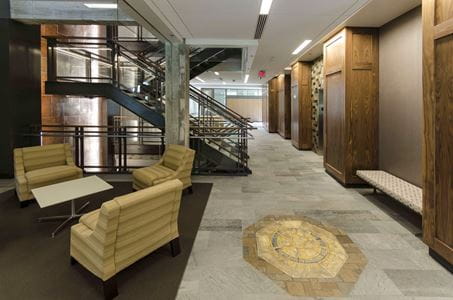 INDIANAPOLIS — One of the oldest buildings on the Indiana University School of Medicine campus has been both transformed and preserved with a $10 million renovation, and university leaders will gather Friday afternoon for a dedication of the newly restored historic Rotary Building.

At the north end of Ball Gardens on the Indiana University-Purdue University Indianapolis campus between Riley Hospital for Children at IU Health and the Sidney and Lois Eskenzai Hospital, the Rotary Building dates to 1931, when much of the current campus did not yet exist.

The building served initially as a children’s convalescent unit associated with Riley Hospital, which had opened in 1924. Members of Rotary clubs across Indiana raised $276,000 to pay for the new facility.

The Rotary Building has served a variety of purposes over the decades, most recently as the home of the IU School of Medicine’s Department of Ophthalmology until the opening of the Eugene and Marilyn Glick Eye Institute in 2011.

The subsequent $10 million renovation project was overseen by Schmidt Associates, working with IU architects and facility planners. The goal was to restore the building’s original beauty while modernizing the structure to meet the needs of the future.

The renovation has produced 40,000 gross square feet of office and academic space, now housing the IU-Kenya Partnership, the Division of Gastroenterology/Hepatology, the Harold Amos Medical Faculty Development Program of the Robert Wood Johnson Foundation and offices of the Department of Surgery.