Event at IUPUI to focus on advancing education in Burmese community 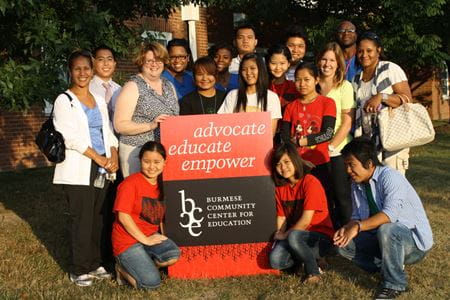 INDIANAPOLIS — A half-day event Aug. 15 at IUPUI will focus on education and advancement for the growing Indiana communities of immigrants and refugees from Burma. The Burmese Community Center for Education and the Great Lakes Equity Center at IUPUI are co-hosting the program for invited leaders from the community, school districts from across the state, the Indiana Department of Education and Indiana University.

The Friday afternoon program at the IUPUI Campus Center has three primary goals: Participants will share information to increase awareness and understanding of available educational, cultural and language resources. The group will establish near and long-term objectives and identify strategies and resources to meet them. Finally, inaugurating the Burmese Education Advancement Taskforce, the event will open opportunities for participants to establish new and strengthen existing partnerships.

Burma, officially called the Republic of the Union of Myanmar by the military junta that overthrew the democratic government in 1962, is a country torn by years of warring conflict. Refugees have fled the country over the years, only slowing slightly since the military government dissolved in 2011 following elections that installed civilian leadership.

“In bringing together leaders from community-based organizations, schools, the state department of education and the university, we are creating a space to dialogue about strengthening educational pathways for students from these communities,” said Thu Suong Nguyen, principal investigator for the BCCE Community Self-Empowerment Program and assistant professor in the Department of Educational Leadership and Policy Studies at the IU School of Education at Indiana University-Purdue University Indianapolis. “An aim of the taskforce is to increase understanding of this multi-ethnic, multi-lingual community, so that communities and schools can work in concert to support students.”

Established in 2010, the BCCE focuses on education, workforce development, family and social health, and housing for the central Indiana Burmese community, estimated at 8,000. Based at the First Baptist Church on the north side of Indianapolis, the BCCE works largely through volunteers from the Burmese community. Last year, the U.S. Department of Health and Human Services granted $600,000 over three years for the BCCE’s Community Self-Empowerment Program, directed by May Oo Mutraw with assistant directors  Neineh Plo and Jerry Htoo. Nguyen and Brendan Maxcy, faculty members in the School of Education at IUPUI, are principal investigators for the grant.

The Great Lakes Equity Center is one of 10 Equity Assistance Centers in the United States that are funded by the U.S. Department of Education under Title IV of the 1964 Civil Rights Act. Directed by Seena Skelton, the center seeks to ensure equity in student access to and participation in high-quality, research-based education by expanding states’ and school systems’ capacity to provide robust, effective opportunities to learn for all students, regardless of and responsive to race, sex and national origin, and to reduce disparities among and between groups in educational outcomes. Along with principal investigator Kathleen King Thorius, Nguyen and Maxcy serve as co-principal investigators of the center.