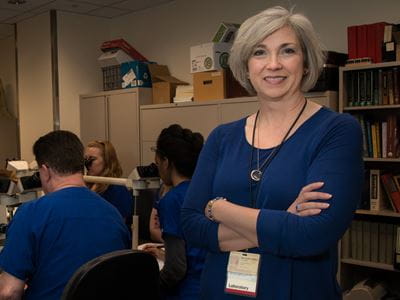 INDIANAPOLIS — Normally when Barbara McGahey Frain of the IU School of Medicine goes to evaluate a pathology sample, she needs only to walk down the hall.

This month, however, she and 10 colleagues from around the country will be traveling more than 8,000 miles to examine the small sample slides. In a volunteer medical outreach venture organized by the American Society for Clinical Pathology, the members of the group will be helping medical officials in Botswana work through a backlog of Pap smears.

It will be a first-time opportunity for Frain, a clinical assistant professor who teaches cytotechnology — the science of examining cells under the microscope to detect cancer and other problems — at the School of Medicine’s Health Professions Programs.

“I’m interested in seeing how they do this in another part of the world, and I hope my skills can help someone out,” she said of the upcoming trip to Gaborone, the capital of Botswana, a nation of about 2 million people in southern Africa.

The Pap smear is a screening test for cervical cancer in which cells from the cervix are placed on a glass slide and then examined under a microscope. Cytotechnologists look for abnormally shaped cells with larger-than-normal nuclei. If such cells are detected, patients are called back for a biopsy and, if necessary, treatment.

The availability of the test has dramatically reduced the incidence of cervical cancer in the United States and other developed countries. But the incidence is much higher elsewhere, including Botswana, where it is the leading cause of cancer deaths in women.

In response, the Botswana government has initiated a national cervical cancer prevention program, which resulted in a large number of Pap exams but led to a shortage of professionals to read the slides, said Shannon Castle, director of the Center for Global Health at the American Society for Clinical Pathology.

The society previously sent teams to Botswana to work on a backlog of more than 2,000 histology specimens, resulting in the invitation to reduce the Pap test backlog.

Frain put her name in for the project in response to the society’s call for volunteers in April. Although she has not participated in a foreign outreach project before, she did help IU School of Medicine investigator Darren Brown, M.D., professor of medicine, read 300 Pap smears collected in Ecuador for research on cervical cancer and the human papillomavirus, which is responsible for many such cancers.

Other than a family trip to England and a professional meeting in Toronto, “My passport has not been used extensively,” Frain said.

The American Society for Clinical Pathology cytotechnology team will be in Botswana for two weeks, working with Botswana government cytotechnologists to read the tests and to conduct continuing medical education classes, Castle said.