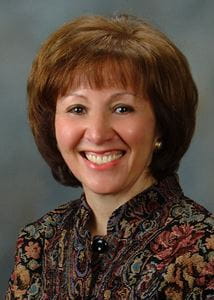 INDIANAPOLIS — Gail Williamson, a professor in the Indiana University School of Dentistry Department of Oral Pathology, Medicine and Radiology, has accepted an open-ended appointment as executive director of the American Academy of Oral and Maxillofacial Radiology.

Oral and maxillofacial radiology is one of nine specialties in the field of dentistry to be recognized by the American Dental Association.

An IU dental school faculty member since 1974, Williamson began dividing her time between the school and the IUPUI campus in 2012, when she accepted a half-time appointment as director of faculty enhancement in the IUPUI Office of the Executive Vice Chancellor and Chief Academic Officer. In addition to her role as a dental school educator, she also directs faculty development programming for the school. She has served in many capacities in the American Academy of Oral and Maxillofacial Radiology for more than 20 years and is the co‐author of a radiographic imaging textbook currently in its fourth edition.

Joining Williamson in the academy leadership is a seven-member team of officers, including her IU dental radiology colleague Dr. Edwin Parks, who has been elected as academy councilor for public policy and scientific affairs. He will hold the position for a three-year term.

Williamson and Parks are widely known and highly respected as experts in their field, often teaming up to co-present courses and programs nationally on wide-ranging oral and maxillofacial radiology topics. They are the co-authors of several textbook chapters, and both have chaired and served as councilors for the American Dental Education Association’s Section on Oral and Maxillofacial Radiology.