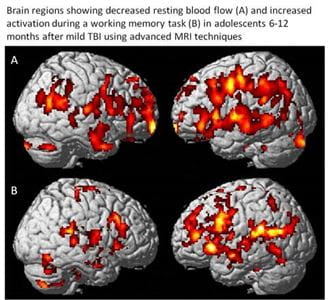 INDIANAPOLIS — Researchers at the Indiana University School of Medicine will use advanced neuroimaging techniques to study area high school athletes to learn how concussions affect blood flow in the brain.

Brenna McDonald, Psy.D., and Yang Wang, M.D., at the IU Center for Neuroimaging, were awarded $300,000 for the research, one of 16 grants announced Thursday by GE and the National Football League for the first stage of the $20 million “Head Health Challenge.”

“Blood flow is critical to brain functioning, of course, but we know relatively little about the impact of concussion on blood flow in athletes,” said Dr. McDonald, associate professor of radiology and imaging sciences.

“This work will improve our understanding of concussion’s effect on brain blood flow shortly after the injury and how those changes relate to concussion symptoms and changes in cognitive functioning,” she said.

“Using MRI, we not only want to improve our understanding of how concussions affect the brain, but to also improve our ability to detect and manage concussions, including determining when it is safe to return to play,” said Dr. Wang, associate professor of radiology and imaging sciences.

In previous research, McDonald and her colleagues identified brain functional abnormalities in children and adolescents six to 12 months after mild traumatic brain injuries. In the latest study, they will attempt to determine whether those abnormalities can be identified within a month of an injury and will then monitor the evolution of those changes over time.

Launched in March 2013, the Head Health Challenge is part of the Head Health Initiative, a four-year, $60 million collaboration between GE and the NFL to speed diagnosis and improve treatment for mild traumatic brain injury. The initiative includes a four-year, $40 million research and development program from the NFL and GE to evaluate and develop next-generation imaging technologies to improve diagnosis that would allow for targeting treatment therapy for patients with mild traumatic brain injury.

In addition, the NFL, GE and athletic clothing maker Under Armour launched two open innovation challenges to invest up to $20 million in research and technology development to better understand, diagnose and protect against brain injury.

The GE NFL announcement in 2013 named a 10-member advisory board of experts from across the country, including Thomas W. McAllister, M.D., the Albert E. Sterne Professor and chair of the Department of Psychiatry at the IU School of Medicine.

Dr. McAllister and Andrew Saykin, Psy.D., director of the IU Center for Neuroimaging, also are members of the IU School of Medicine team that will conduct the high school athlete imaging research.