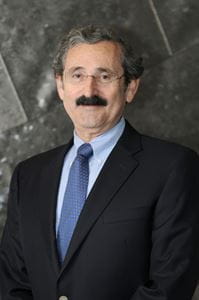 INDIANAPOLIS — Indiana University cancer researchers have discovered that a protein that normally suppresses tumors actually promotes the growth and spread of pancreatic cancer.

Murray Korc, M.D., the Myles Brand Professor of Cancer Research at the Indiana University School of Medicine and a researcher at the Indiana University Melvin and Bren Simon Cancer Center, and colleagues have shown that the retinoblastoma protein, a tumor suppressor, often malfunctions in pancreatic cancer. That dysfunction enables an inhibitory protein to promote pancreatic cancer growth.

The research was published online today in the Journal of Clinical Investigation.

As a result of the dysfunctional retinoblastoma protein, pancreatic cancer cells lose their ability to be inhibited by transforming growth factor-beta, or TGF-β, which is a key negative regulator of cell proliferation, according to Dr. Korc. Instead, the cells become stimulated by TGF-β due to activation of abnormal downstream signals known as non-canonical pathways.

The researchers also showed that TGF-β induces the expression of a growth-stimulating molecule called Wnt7b, which is not usually found in a normal adult pancreas. This combination allows TGF-β to directly enhance pancreatic cancer cell proliferation and survival.

Because the abnormal pathways activated by TGF-β and Wnt7b can be disrupted with drugs, Dr. Korc suggested that the findings open up a new avenue for exploring novel therapeutic combinations in pancreatic cancer.

However, Dr. Korc cautioned that more work remains to be done to determine how to best restore the regulatory functions of the retinoblastoma protein and prevent the harmful actions of TGF-β.

“We have to figure out how to target these important pathways and to prevent bypass pathways from being activated,” he said.

Co-authors of the study were A. Jesse Gore, Samantha L. Deitz, Lakshmi Reddy Palam and Kelly E. Craven from the Department of Medicine at the IU School of Medicine.

The study was made possible, in part, by grant R37-CA-075059 awarded by the National Cancer Institute of the National Institutes of Health.

For the past two decades, Dr. Korc’s work has focused on aberrant growth-factor signaling in pancreatic cancer. More recently, he began studying genetic mouse models of pancreatic cancer, with the goal of designing novel therapeutic strategies.

He is internationally recognized for his seminal contributions to the understanding of the roles of the epidermal growth factor receptor and TGF-β in pancreatic cancer. His research team discovered that TGF-β molecules are expressed at high levels in the cancer cells in human pancreatic tumors and that targeting TGF-β can suppress its ability to exert so-called paracrine effects in the pancreatic tumor microenvironment.

Only 6 percent of patients survive the disease five years following diagnosis. According to the National Cancer Institute, there will be an estimated 45,220 new cases of pancreatic cancer and 38,460 deaths from the disease in 2013.