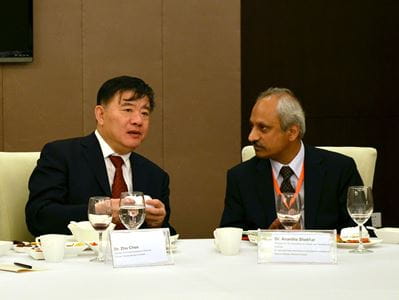 INDIANAPOLIS — An Indiana University School of Medicine researcher will forge new partnerships between Indiana and China as the U.S. leader of a board created to advise the Chinese government on creating a national infrastructure to accelerate biomedical research.

Anantha Shekhar, M.D., Ph.D., associate dean for translational research and Raymond E. Houk Professor of Psychiatry at the IU School of Medicine, was recently named co-director of the scientific advisory board for the Sino-American Symposium on Clinical and Translational Medicine during the group’s annual meeting in Beijing. Additional participants included medical school deans, researchers and thought leaders from around the world.

Dr. Shekhar will chair the advisory group’s U.S. board. The chair of the China board is Gui Yonghao, M.D., dean of the Shanghai Medical School and vice chancellor of Fudan University.

“The Chinese government is trying to create centers of excellence for translational medicine similar to the system that exists in the United States,” Dr. Shekhar said. “We’re trying to accelerate the rate of information exchange between leaders in this field in the U.S. and China by exposing U.S. leaders to the Chinese environment and Chinese leaders to U.S. best practices.”

Translational medicine is the art of transforming medical research from experiments in the lab into safe and innovative new treatments and therapies for patients in the clinic. The U.S. translational research system includes 60 centers funded by Clinical and Translational Science Awards from the National Institutes of Health, including the Indiana Clinical and Translational Sciences Institute, a $30 million NIH-funded collaboration among IU, Purdue University and the University of Notre Dame. Several CTSA directors also serve on the U.S.-China advisory group.

Dr. Shekhar serves as the director of the Indiana CTSI as well as president of the Association for Clinical and Translational Science, an independent organization of clinical and translational research scientists and organizations.

The group’s short-term goals include establishing an exchange program to welcome Chinese scientists to U.S. institutions, including Indiana University, for up to one year in order to learn U.S. clinical research techniques from medical researchers. The long-term goal is to leverage China’s state-run health care system to create a pipeline for clinical trial research, in which patients receive new treatments or therapies under strict ethical and safety guidelines.

“It’s currently estimated that China will consume about one-third of all global pharmaceutical sales within the next 10 years, but they lack the robust infrastructure needed to support this work or safely test new drugs,” Dr. Shekhar said. “Their leaders know they’ve got to change since they can’t currently meet their own need for innovation.”

Despite their great size — the central hospital in Beijing houses about 10,000 patient beds — China’s hospitals exist primarily to provide primary care and train doctors, not conduct clinical research or make health care innovations. Dr. Shekhar said cooperation between medical leaders in the U.S. and China to overcome these hurdles will create great benefits for U.S. researchers, in terms of both economic and scientific breakthroughs.

This includes insights into disease such as diabetes, for which there is a different set of causes in China versus the U.S., and cancers, some of which are far more common in the U.S. Understanding the underlying scientific reasons for these differences is the first step to more effective treatments.

Since genetic differences also tend to translate into differences in drug effectiveness, Dr. Shekhar added that many pharmaceutical companies will not market new treatments in a country without first conducting a clinical trial in the nation. Closer ties between the U.S. and China will improve IU School of Medicine researchers’ ability to conduct clinical research studies on China’s vast patient population, increasing the global impact of their discoveries and creating more effective treatments worldwide.

Such partnerships also open the door to new research on alternative treatment methods, such as traditional Chinese medicines, which are frequently overlooked by U.S. physicians, he said.

In terms of business opportunities, Dr. Shekhar said that collaboration between U.S. and Chinese scientists — whether to develop new drug therapies or biomedical technologies — creates a smoother pipeline to the Chinese market since joint discoveries bypass many regulatory and intellectual property hurdles.

“Any new technology is likely to be consumed in massive amounts in China; it’s an emerging market,” he said. “The rationale behind our engagement with the country is the same as any other industry going to China. It’s a huge opportunity.”

Additional U.S. advisory board members include Barbara M. Alving, M.D., former director of the National Center for Research Resources at the NIH, who preceded Dr. Shekhar as chair of the U.S. advisory group; and Vicki Seyfert-Margolis, Ph.D., former senior science advisor to the FDA commissioner.

The Scientific Advisory Board for Sino-American Symposium on Clinical and Translational Medicine will meet quarterly, with annual in-person meetings in the U.S. and China.

About the Indiana CTSI﻿

The Indiana Clinical and Translational Sciences Institute is a statewide collaboration of Indiana University, Purdue University and the University of Notre Dame to facilitate the translation of scientific discoveries in the lab into new patient treatments in Indiana and beyond. It was established in 2008 with a Clinical and Translational Science Award from the National Center for Advancing Translational Sciences at the National Institutes of Health totaling $30 million (TR000006, TR000163 and TR000162), with additional support from the state, the three member universities, and public and private partners. It is a member of the national network of 60 CTSA-funded organizations across the country.