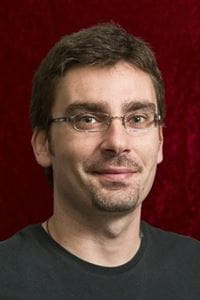 INDIANAPOLIS -An assistant professor of computer science at Indiana University-Purdue University Indianapolis earned the prestigious CAREER Award from the National Science Foundation for research to identify the patterns by which neurons develop and connect to form a brain.

Gavriil Tsechpenakis becomes the fifth faculty member in the School of Science at IUPUI currently working under an NSF CAREER Award. He is the third researcher in the Department of Computer and Information Science to receive the distinction, the highest honor given by the NSF in support of faculty members early in their careers who exemplify the role of teacher-scholars through outstanding research, excellent education and the integration of the two areas.

Tsechpenakis, who specializes in biomedical vision and computer imaging, will use the $600,000 award across five years to continue work he started years ago, first as part of a National Institutes of Health study of in-vivo, protein-to-protein interaction networks and later as part of an NSF-funded pilot study of brain structure at the single-cell level. Essentially, he now will study how neural circuits develop in fruit fly larvae to build a synaptic map of the very early stages of brain formation.

“The object of this process is to create an image-based computational model of how synaptic connectivity is established in vivo during brain development,” he said. “We are able to see how dendrites (signal transmitters branching out from neurons) are formed and study the dynamics of how these circuits are working.”

The brain remains the most complex and least understood organ in the human body, consisting of billions of individual neurons. Tsechpenakis will examine neuron function at the single-cell level as well as the behavior of the connections between those individual cells.

The research will analyze these developments for up to four consecutive days, which will allow the changes to be observed as the organism develops and as it reacts to any environmental changes. The research also will explore how the brain compensates when synapses are lost or destroyed, perhaps during a significant trauma or injury.

“We hope to understand how the brain works at a very low level,” he added. “Instead of studying the responses of the brain, we are examining what causes these responses.”

Answering long-standing questions in these areas could help advance greatly the field of neuroscience and could lead to advancements in human brain treatments in the areas of aging, disease, drug treatment and injury recovery.

The NSF requires that CAREER Awards, in part, be distributed for outreach programs designed to create research opportunities for students. Tsechpenakis said he hopes the funding will help create internships for high school students, allow for student travel to academic conferences and support graduate student and post-doctoral research in the department.