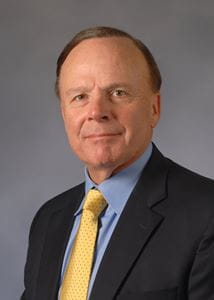 INDIANAPOLIS–An Indiana University School of Medicine researcher has received $1.2 million for the first year of a $3.8 million three-year grant from the National Institutes of Health to study estrogen as a treatment for schizophrenia using an unreleased drug developed by Eli Lilly and Co.

Alan Breier, M.D., Association for the Advancement of Mental Health Research and Education, Inc. and Indiana University Psychiatry Associates Professor of Psychiatry at the IU School of Medicine, received the highly competitive grant from a new program at the National Center for Advancing Translational Sciences. The program, Discovering New Therapeutic Uses for Existing Molecules, aims to identify new uses for drugs that have undergone significant research and development by industry, including safety testing in humans.

Indianapolis-based Eli Lilly and Co. is one of several pharmaceutical companies to open their database of proprietary drug compounds to the research community for the first time in order to “crowdsource” potential new applications.

Dr. Breier and his IU collaborators will employ a drug candidate that targets an estrogen receptor discovered within the past 10 years that is highly concentrated in the brain, called estrogen receptor beta. The compound mimics some of the actions of the hormone on the body without many of the negative side effects, such as feminization in men and uterine cancer in premenopausal women.

“Estrogen therapy designed to hit only this new estrogen receptor has never been tried in any psychiatric disorder by any research group — we’re talking about a new target, a new mechanism and a new novel molecule,” Dr. Breier said. “We’re the first because no one else studying psychiatric disorders has had access to highly selective agents for the estrogen receptor beta, which avoids the alpha receptor that causes the common concerning side effects associated with estrogen.

“Industry has traditionally been better equipped than academic medical centers to develop this sort of highly selective drug,” he added. “This new NIH grant mechanism brings together the strengths of both academic centers and big pharma.”

The average length of time from target discovery to approval of a new drug is more than 13 years, and the failure rate exceeds 95 percent. This failure rate means, however, that many existing partially developed compounds could be advanced to clinical trials more quickly than starting from scratch.

The Eli Lilly compound, which targets the beta receptors and has been safely tested in humans but never released to the market, was originally developed to treat prostate enlargement in men. The estrogen receptor alpha causes the feminine and sexual properties of estrogen.

The compound is seen as a promising treatment for schizophrenia because studies have shown the protective effect of estrogen on the brain and its ability to modulate neurotransmitters thought to cause schizophrenia.

“Women appear to age better from the perspective of central nervous system health,” Dr. Breier said. “It’s been known for decades that estrogen has neuroprotective properties; it keeps neurons healthy and seems to protect against the symptoms of schizophrenia.”

Evidence for the protective effects of estrogen include research that shows women with schizophrenia experience fluctuations of their symptoms with the menstrual cycle and that postmenopausal women who are no longer producing estrogen experience an exacerbation of their symptoms.

Woman also exhibit less severe forms of schizophrenia and develop the disease later in life, in comparison to men. Both sexes are diagnosed with the disease at an equal rate, however, with about 1 percent of the adult population experiencing symptoms.

“There are currently no drug treatments for those two syndromes despite the fact they’re so important to day-to-day functioning,” Dr. Breier said. “The compounds on the market only target psychosis, including paranoid delusions and hearing voices, for which they’re moderately effective. There’s a tremendous amount of need for new drugs.”

The study, which has received approval from U.S. Food and Drug Administration, aims to enroll 90 participants, including two who have already begun the study. Patients will be enrolled through the IU Psychotic Disorders Program, directed by Dr. Breier, which operates clinics at Wishard Hospital and Larue D. Carter Memorial Hospital. Patient outcomes will be tracked based upon validated scales to measure improvement in cognitive functions and negative symptoms.

The study’s second year will be dependent upon a successful review of the results following the first 12 months. This review board will include an IU neuropsychologist, biostatistician and pharmacologist as well as representatives from Eli Lilly, the NIH and an outside consulting group. Dr. Breier’s team will receive $1.2 million for the first year, with the additional funds arriving in the second and third years providing key milestones are met.

Dr. Breier’s study is one of only nine projects to receive support from the new NIH program. Collaborators on the IU project include Anantha Shekhar, M.D., Ph.D., director of the Indiana Clinical and Translational Sciences Institute and Raymond E. Houk Professor of Psychiatry at the IU School of Medicine; Andrew Saykin, M.D., director of the IU Center for Neuroimaging and Raymond C. Beeler Professor of Radiology at the IU School of Medicine; and Brian O’Donnell, Ph.D., professor of psychology and brain sciences at IU Bloomington. The Indiana CTSI will also support the project through data management, sample processing and the study design.

“I really believe this is a model for the future of how academic centers, such as IU, can collaborate with industry in a way that can advance molecules,” Dr. Breier said. “If we hadn’t come forward with this proposal, this molecule could still be sitting on the shelf.”

The National Center for Advancing Translational Sciences is a distinctly different entity in the research ecosystem. Rather than targeting a particular disease and fundamental science, NCATS focuses on what is common across diseases and the translational process. The center emphasizes innovation and deliverables, relying on the power of data and new technologies to develop, demonstrate and disseminate improvements in translational science. This funded research project was supported in response to RFA-TR-12-004.