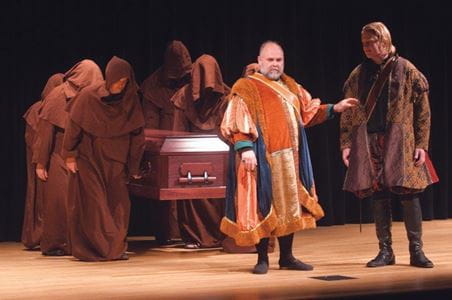 INDIANAPOLIS — The local public television documentary highlighting the re-creation of a “lost” Shakespeare play and its world premiere performances at Indiana University-Purdue University Indianapolis is in the running for three 2013 Emmy Awards.

“C.S.I. Shakespeare,” a 30-minute documentary that first aired in November 2012 on WFYI 1 Public Television (20.1 DT), tells the story behind the play and its production as the first event for the IUPUI Campus Center Theater.

“These nominations should be a source of genuine pride and happiness for everyone who collaborated in the creation of this documentary,” said William Blomquist, dean of the School of Liberal Arts. “We very much appreciate our partnership with WFYI, and wish ‘CSI: Shakespeare’ all the best in the regional Emmys.”

The IUPUI performances of “Cardenio” were based on the Shakespeare/Fletcher script as re-imagined by Gary Taylor, an internationally recognized scholar and Distinguished Research Professor at Florida State University. The performances were held in conjunction with an academic colloquium at IUPUI, “The History of Cardenio: Spain and England, Then and Now,” which attracted major Shakespeare and Cervantes scholars from around the world.

The National Academy of Television Arts and Sciences Lower Great Lakes Chapter announced the 2013 regional nominations on April 25. The nominations for “The History of Cardenio” were among 19 Emmy Award nominations WFYI received in recognition of outstanding local documentary and public affairs program productions.

The 44th Emmy Awards ceremony for the Lower Great Lakes Chapter will take place Saturday, June 1, at the Windows on the River in Cleveland, Ohio.

Production funding for “C.S.I. Shakespeare” was underwritten by the IU School of Liberal Arts at IUPUI.