Nearly 2000 to run for peace in Kenya 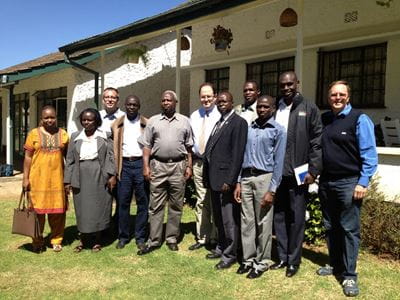 INDIANAPOLIS – Nearly 2,000 people will run for peace Sept. 28 in Eldoret, Kenya, in a peace run organized by Indiana University-Purdue University Indianapolis, Moi University, and Athletics Kenya, in an area that was rocked by violence five years ago following a controversial Kenyan presidential election.

The MUKESCO Peace Run in Eldoret will bring together nine teams that mix members of nine villages surrounding Moi University in Eldoret with university students and Kenyan community members of multiple tribes, religious faiths and cultures, and international representatives. Each team will have about 200 participants, who will run races of varying lengths.

The diverse make-up of the teams is a far cry from the experiences many have growing up in a Kenya where they have little or no contact with members of other tribes or persons with a different religious faiths, much less people from other countries, said Ian McIntosh, director of International Partnerships in the IUPUI Office of International Affairs.

This separation of one tribe from another, the British colonial legacy, and long simmering disputes over land ownership, played a role when tribe set upon tribe following allegations of voting irregularities in the 2008 Presidential elections, he said.

Each ‘peace’ team will be anchored by a well-known long-distance runner from Eldoret, which is world famous for producing Olympic and World Champions.  These runners include Kip Keino, Moses Tanui, Patrick Sang, and Lornah Kiplagat. The teams will be named after the constituent parts or ingredients for long-term peace-building: love, joy, unity, harmony, hope, trust, and so on.

The organizers of the event, including Sotiris Hji-Avgoustis, a tourism professor in the IU School of Physical Education and Tourism Management at IUPUI, hope the peace run will broaden the standing of Eldoret to being famous as the city where sport and peace go hand-in-hand.

Because everyone is running for peace and understanding as well as the development of rural Kenya, everyone will be a winner, McIntosh said. The peace run prizes will be community assets. The top prize is a new well for the one of the villages. Other prizes include school uniforms, books and development of cultural tourism facilities at the nearby Kesses Dam to encourage recreation activities.

The IU School of Physical Education and Tourism Management at IUPUI has been helping since 2010  to promote the High Altitude Training Center in Eldoret as a sports tourist destination geared toward people interested in long-distance running, biking and physical training, Hji-Avgoustis said. The High Altitude Training Center, located about 30 minutes from Eldoret at an elevation of 7,000 feet, is known worldwide among long-distance running enthusiasts. It was founded in 1999 by Kiplagat, a four-time world champion runner.

“We will promote the idea of the last Saturday of September as being a Kenyan day of peace,” McIntosh said. “The race will be held at this time each year. In an ideal scenario, the race will be held in multiple locations across Kenya and the globe on this same day, all in the interest of peace and development.”

Moi University was selected as the venue for the peace run because of its strong reputation as being a ‘university of peace’ where diversity is cherished and social inclusion is promoted. Indiana University and in particular its campus in Indianapolis has been in partnership with Moi University for over 20 years.

Sponsors of the event include Moi University, IUPUI, Athletics Kenya, Rivatex, Forus Shoes, Medals for Mettle, and the Efroymson Family Fund. Jeremy Efroymson, an Indianapolis philanthropist and arts activist, has also accompanied McIntosh and Hji-Avgoustis to Eldoret to assist with race logistics.