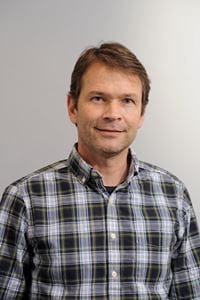 INDIANAPOLIS – Children living in urban areas of Indianapolis and other cities are exposed every summer to a silent and invisible toxin that can have serious health consequences, says an Indiana University-Purdue University Indianapolis scientist, one of five researchers who spent nine years studying lead blood levels of more than 367,000 children in Detroit.

The evidence from the study shows that a mysterious seasonal increase in child blood lead levels observed in urban areas throughout the United States is caused by children inadvertently ingesting or breathing dust contaminated with fine lead particles when they play outside in July, August and September, said, Gabriel Filippelli, an earth sciences professor in the School of Science at IUPUI and director of the Center for Urban Health.

The evidence also confirms that the primary source for widespread lead poisoning is airborne dust, not lead-based paint.

The study was recently reported in the American Chemical Society’s Journal of Environmental Science and Technology.

In late summer, wind, a lack of rainfall and other meteorological factors increase the amounts of dust in the air. Lead levels in children increase, often by more than more than 50 percent, in the summer but decrease during the winter and spring.

Persistent exposure to airborne lead contamination year after year leads to chronic lead poisoning, Filippelli said. There is a lot of health evidence that the effects of chronic lead poisoning include lowering children’s IQs and increasing the rate of attention deficit disorders. Furthermore, children with long-term chronic exposure are several times more likely to eventually be jailed for violent crimes as adults.

Filippelli said Detroit was chosen as the site for the study because of the availability of good health records for children and good air-quality data. The same results would be found in any urban city, he said, noting that earlier studies that focused on Indianapolis, New Orleans and Syracuse, N.Y., indicated that airborne dust laden with lead particles was the culprit.

Elimination of lead from sources such as factories, gasoline, paint, water pipes and solder used to seal canned goods helped stop new sources of lead from entering the soil. But lead that was deposited years ago remains in the surface soils and continues to be swept into the air as fine particles.

Those lead particles will haunt urban areas for decades to come, Filippelli said. The soil in some urban neighborhoods has been left with 20 times the normal levels of lead.

One solution is too expensive when it involves large areas: digging up the top 2 feet of soil and throwing it away in a landfill. But there are steps parents can take to protect their children, Filippelli said. Those steps include:

Plant grass in the family yard and water it throughout the summer to make sure it keeps dust to a minimum.

Cover areas next to the house, where lead levels often are the highest, with a thick layer of mulch or other similar product.

Have children leave their shoes at the door when they come inside from playing, and make sure they wash their hands.

Filippelli and his fellow researchers recommend that the federal government shift its emphasis from cleaning lead-based paint from homes to aggressive landscaping techniques to improve children’s health.