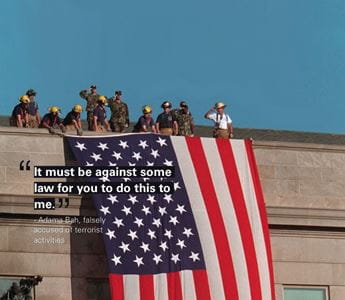 INDIANAPOLIS — Nicknamed GTMO, the United States naval station at Guantánamo Bay, Cuba, has a history that is infamous and yet unknown to most Americans. A new traveling exhibit running April 10 through May 12 at the Indiana University-Purdue University Indianapolis Cultural Arts Gallery reveals that history.

Developed by more than 100 students from IUPUI and 11 other universities, the exhibition, Why Guantánamo?, explores GTMO’s history from the US occupation of Guantánamo Bay in 1898 to today’s debates about its future.

This traveling exhibition is a program of the Guantánamo Public Memory Project which seeks to build public awareness of the century-long history of the naval station.

An opening day reception takes place from 6 to 7 p.m. at the gallery, located on the second floor of the IUPUI Campus Center, 420 University Blvd.

In 2012, 21 IU School of Liberal Arts at IUPUI graduate students in the museum studies and public history programs created two panels for Why Guantánamo?  Students were responsible for researching, writing, and selecting the photographs for the panels.  Those in the Introduction to Museum Studies class produced the panel “Arts of Detention,” and students in the Guantánamo Project class produced the panel “Guantánamo Hits Home.” Students who helped develop these panels in the traveling exhibit will be on hand to talk to guests at the reception on April 10.

Following the reception, a lecture featuring Indiana Supreme Court Justice Steven H. David and Indianapolis attorney Richard Kammen as speakers takes places place from 7 to 8:30 p.m. in Room 450A of the Campus Center. David and Kammen will discuss their experiences with post-9/11 Guantanamo detainees.

David was the chief defense counsel to the Office of Military Commissions from 2007-2010.  He oversaw the defense team for post-9/11 detainees in Guantánamo. Kammen is the civilian learned counsel responsible for defending Abd al-Rahim Hussein Mohammed Al-Nashiri. Al-Nashiri is accused of masterminding the 2000 bombing of the USS Cole.

Edwards, director of the law school’s program in international human rights law, was an expert witness in the Guantánamo Bay U.S. Military Commission case against Australian David Hicks. Edwards and his students also provided research assistance for the defense of Hicks and for Omar Khadr, a Canadian who was 15 years old when taken to Guantanamo Bay.

Paid parking is available in the Vermont Street parking garage, which is connected to the IUPUI Campus Center.