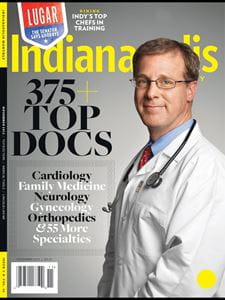 More than 200 Indiana University School of Medicine physicians were recognized as â€œTop Docsâ€ in Indianapolis Monthlyâ€™s November issue in categories including medicine, neurology pediatrics and surgery.

Rankings were determined by the Seattle-based company Avvo, which rates and profiles dental, legal and medical professionals across the country. Doctors were rated on a 10-point scale based on factors including experience, education, training and research. The issue is available on newsstands now and online Nov. 20.

The magazine also prominently featured several physicians, including George Sandusky, DVM, Ph.D., senior research professor of pathology and laboratory medicine; Anna Maria Storniolo, M.D., professor of clinical medicine; and Christian Schmidt, M.D., associate professor surgery, who made the cover of the magazine as one of the area’s best general surgeons.

Dr. Sandusky was featured for his neurological research using tissue collected from century-old human brain samples at the Indiana Medical History Museum. His work has revealed that these samples remain a viable source of genetic information — a vast collection of highly valuable data on an organ that’s increasingly difficult to acquire for investigation.

“I was surprised, shocked and honored by the story,” Dr. Sandusky said. “It will bring awareness about the effect that emerging genomic technology is making in a number of diseases, including brain science. This technology will lead to new and better patient diagnosis and treatments.”

Dr. Storniolo was recognized for establishing the Susan G. Komen for the Cure Tissue Bank at the IU Simon Cancer Center in collaboration with patient advocate Connie Rufenbarger. This tissue bank, which now contains specimens from more than 2,800 women, supplies healthy breast cell samples to researchers, including many prestigious institutions, for comparative research studies.

“I certainly appreciate Indianapolis Monthly’s attention to our work, as it helps us make women aware of our ongoing need for healthy tissue,” Dr. Storniolo said. “My work with the Komen Tissue Bank at the IU Simon Cancer Center has been a real eye-opening experience. We’ve changed the face of breast cancer research, not just by providing truly ‘normal’ breast specimens for the first time ever, but in so doing, by involving the consumer in the process. The women of Indiana can say that they have had a real impact in helping to find a cure for this devastating disease. They are to be commended for their selflessness.”

More than 375 area physicians were recognized by the magazine. The complete list of IU School of Medicine faculty members ranked are:

Editor’s Note: Several faculty members were not included in the original version of this release.