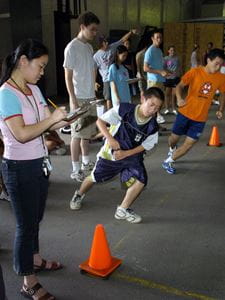 At left, West Lafayette’s Lu Wu, a master’s degree student in Purdue’s Department of Foods and Nutrition, keeps track of physical fitness scores for William He (in blue), 14, of Plainfield, Ill., and Myles Ian (in orange), 15, of Lisle, Ill. The high school student lived on campus for six weeks as part of Purdue […]

Camp Calcium, an innovative program that provides a fun and educational summer camp environment to children age 11 to 15 – while also carefully monitoring calcium metabolism and absorption rates to inform international health standards – was established in 1990 by Connie M. Weaver, Ph.D., deputy director of the Indiana CTSI and Distinguished Professor and chair of nutrition science at Purdue University. Data from the project have been a key factor used by many health experts to set national childhood calcium recommendations, including the Institute of Medicine guidelines employed by the United States and Canada.

“This is the first time all the published data – as well as all associated articles – have been collected together in a public forum,” Dr. Weaver said of the project, which includes comprehensive statistics from more than 20 years of data analysis from the summer camps, including links to academic publications and other supplemental information. “I can easily envision dietary guidance committees all over the world using these data, as well as other researchers studying in calcium in children.”

The database technology – originally developed by computer scientists at the Saul Rosen Center for Advanced Computing at Purdue University – was implemented at the Indiana CTSI by the  Advanced Biomedical Information Technology Core – centered at Indiana University – in collaboration with Rosen Center scientists. Support for the project was provided by a supplemental grant to the Indiana CTSI from the National Institutes of Health Clinical and Translational Science Award program in fall 2011. The Camp Calcium database will serve as a model for future data collection projects hosted by the Indiana CTSI HUB that require the ability to share information across multiple laboratories or institutions.

“The Indiana CTSI HUB has a broad array of research collaboration tools that help accelerate translational research and data sharing,” said Bill Barnett, Ph.D., director of science community tools for the IU Pervasive Technology Institute and director of information infrastructures for the Indiana CTSI. “These new capabilities add to the strength of the HUB as a statewide portal for health research.”

Begun in the late 1980s, Camp Calcium developed during a time when Dr. Weaver’s own children were enrolled in summer camp. In order to overcome the challenges inherent in measuring calcium intake and absorption in adolescents – which requires young clinical trial participants to agree to six weeks of strict physical monitoring and a controlled diet – she proposed the non-traditional idea of creating a summer camp. Over the past 22 years, the program has grown from 14 teen girls its first year – plus counselors, who also served as clinical trial participants – to a regular tradition whose most recent six-week event boasted 70 participants. The project has also expanded from one focused on girls only to trials that have recruited boys and girls in four ethnic and racial groups from across Indiana and five neighboring states. Data is collected using medical imaging technology, such as a bone density scanner, and by taking physical specimens, such as blood and urine samples.

“Our first groups of kids especially were middle- to low-income children who may or may not have had an opportunity to go to summer camp,” said Berdine R. Martin, a research associate in the College of Health and Human Sciences at Purdue. “They’re also exposed to the university environment; it’s a chance to come to campus and learn about what college students do.”

More than 500 children have participated in the 11 camps held since 1990, with volunteers recruited through groups such as Indianapolis Public Schools and Chinese American Service League in Chicago. To keep campers educated and entertained, Camp Calcium organizers take advantage of departments and laboratories across Purdue, with past camps featuring activities such as a visit to an engineering wind tunnel lab, an introduction to veterinary science, and chemistry and physics shows. The camp has been funded by three major NIH centers, with the most recent support from the Eunice Kennedy Shriver National Institute of Child Health and Human Development.

As the pilot for the larger integration of advanced database capabilities into the system, Camp Calcium is the first of many databases to be added to the Indiana CTSI HUB, said Ann Christine Catlin, a research scientist at the Rosen Center and director of Purdue’s HUB database development group, who has led the development of 30 advanced medical and scientific databases, including eight built upon HUBZero, a platform for scientific collaboration developed by Purdue. HUBZero is used by the Indiana CTSI to power its website, grant application system, clinical trials database and other tools.

“This is a very general database technology that has been developed over the last few years and has been used across many different HUBs to build research databases,” Dr. Catlin said. “The fact it’s integrated so tightly with HUB technology allows Indiana CTSI developers to build and integrate new capabilities into the system.”

Features include the ability to instantly manipulate information by category and create on-the-fly data visualizations such as line graphs. Databases may be secure, login-protected sites or completely open webpages, such as the Camp Calcium project. The data includes no personally identifiable information on individual campers.

“For the past 20 years, we’ve been managing everything by email attachments and Microsoft spreadsheets,” Dr. Weaver said. “I’m eager to see the Indiana CTSI provide the same capabilities to many other interdisciplinary and inter-institutional projects.”

The Indiana Clinical and Translational Sciences Institute is a statewide collaboration between Indiana University, Purdue University and the University of Notre Dame, and public and private partnerships, that facilitates the translation of scientific discoveries in the lab into new treatments and therapies in Indiana and beyond. It was established in 2008 with a $25 million Clinical and Translational Science Award from the National Center for Research Resources of the National Institutes of Health, supplemented by nearly $60 million from the state, the three member universities, and public and private partners. Indiana CTSI is a member of a national network of 60 CTSA-funded organizations across the United States. For more information, visit www.indianactsi.org.