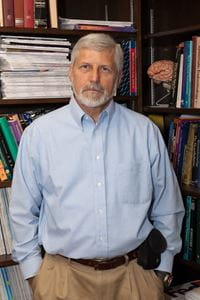 For Michael J. Kubek, Ph.D., associate professor of anatomy and cell biology and of neurobiology, the Army-funded international research collaboration on suicidal ideation is the latest development from more than three decades of work with thyrotropin-releasing hormone, or TRH, a neuro-chemical Dr. Kubek helped discover in the human brain.

TRH is known to have anti-depressant and anti-suicidal effects, as well as anti-convulsant effects in humans, but it cannot easily cross the “blood-brain barrier” the body uses to protect the brain. That means delivering TRH via injection or orally would have little sustained effect.

So Kubek and his colleagues are developing an intranasal nanoparticle drug delivery system in which TRH or other neuropeptides could be introduced into the nasal cavity, where olfactory neurons can collect particles directly. The neuropeptides would be incorporated into biodegradable nanoparticles that dissolve at a controlled rate designed to deliver appropriate doses of the drug to the brain over time.

Kubek became interested in this potential use of TRH in a military population through a chance encounter with then Navy physician Capt. Neal Naito several years ago. As the director of public health for the Navy before he retired in October, Dr. Naito was interested in new treatment approaches for traumatic brain injury, post-traumatic stress disorder and suicide. His searching of scientific publications in these areas led him to contact Dr. Kubek about his research and work with him to obtain funding to do further clinical studies with TRH.

The IU School of Medicine project is part of a national effort at several research centers designed to combat suicides in the nation’s military. Suicide rates among active-duty military personnel have climbed steadily since 2004, reaching a level of nearly one every day this year — even higher among veterans — according to statistics recently released by the Pentagon and the Department of Veterans Affairs.

“These deaths are troubling and tragic,” Dr. Kubek said. “Today’s commonly used anti-depressants can take weeks to have an effect and carry a black box warning label for suicidal ideation in young adults. That is why we hope to develop a quick-acting, easy-to-use, non-invasive system that delivers a compound that’s been shown to reduce suicidal thoughts.”

Dr. Kubek is working with Abraham J. Domb, professor of pharmacology at Hebrew University in Jerusalem, to develop an optimum nanoparticle-neuropeptide combination designed to deliver the drug effectively. That process is likely to take about a year, after which the process of testing in people could begin.

Dr. Kubek also is collaborating with Purdue University researchers Stephen Byrn, Ph.D., Charles B. Jordan Professor of Medicinal Chemistry, and Yoon Yeo, Ph.D., assistant professor, industrial and physical pharmacy. Clinical trials, expected in the second and third year of the program, would be directed by Indiana University psychiatry professors Alan Breier, M.D., and Andrew Goddard, M.D., through the Clinical Research Center of the Indiana Clinical and Translational Sciences Institute. In addition, Indiana University Research and Technology Corp. has worked with Dr. Kubek for many years and closely supported this translational effort.

TRH’s potential anti-convulsant therapeutic effects have taken Dr. Kubek in another direction as well, evaluating the compound as a possible non-invasive treatment for infantile spasms, a rare, uncontrollable form of epilepsy that affects children 6 to 12 months old. Funding from Citizens United for Research in Epilepsy supported some of the proof of concept research for the intranasal nanoparticle delivery platform being used in the Defense Department grant, Dr. Kubek said.