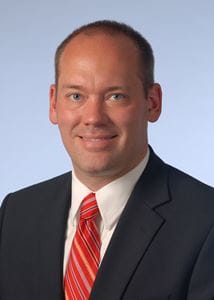 Jacob Kean, Ph.D., visiting assistant research professor of physical medicine and rehabilitation at the IU School of Medicine and an investigator at the Richard L. Roudebush VA Medical Center, is the recipient of the five-year, $920,000 career development award from the Department of Veterans Affairs Rehabilitation Research and Development Service to leverage the VA’s telehealth system for veterans suffering from the chronic symptoms of mild traumatic brain injury. The grant period will begin July 1.

“There have been many other studies on mild brain injury symptoms, but none on self-management related to the condition,” Dr. Kean said. “Our health care system has never considered brain injury to be a chronic condition, but victims experience lifelong consequences, including neuro-degeneration and other progressive problems.”

An estimated 180,000 recent war veterans have returned from service with mild to moderate brain injury, with 10 to 20 percent demonstrating persistence symptoms such as chronic headaches, lack of concentration, depression, sleeplessness and re-experiencing past trauma.

Dr. Kean’s research developed from earlier work supported by a Project Development Team grant and Young Investigator Award from the Indiana Clinical and Translational Science Institute. He also serves as a core member of the IUPUI Signature Center for Brain Rehabilitation, Advanced Imaging and Neuroscience.

The first 18 months of the grant period will go toward building a conceptual framework for measuring self-management in veterans, including interviews with veterans and experts in self-management and mild brain injury.

This data will inform an “adaptive algorithm” to test patients for qualities that suggest whether they are effective or ineffective self-managers. Potential indicators might include whether a patient is skilled at sticking to medications or getting regular exercise.

“It may be that the patient will get an iPad in a waiting room and answer five to eight questions, which in turn are informed by an algorithm that includes 200 questions,” Dr. Kean said. “So, in a span of two minutes, they’re measured against a broad continuum” — whether physical functioning or mental health or some other quality determined to affect self-management — “using an ultra-brief assessment that’s very precise and provides data that informs the clinical interaction.”

The aim will be to give physicians and care managers more information about mild brain injury patients’ self-management skills in order to “steer them toward taking that next step” in controlling their condition. A patient with strong self-management skills but poor self-efficacy — the belief that he can achieve meaningful change — may be given an appointment with a psychologist. Another patient whose profile suggests she is good at making healthy life changes but struggles to maintain them may be steered toward a peer support program.

“We know there are super self-managers and there are very poor self-managers, but first we need to conceptualize self-management to understand whether the steps we’re asking our veterans to take are going in the right direction or the wrong direction,” Dr. Kean said.

Integrating the assessment with the VA’s extensive telehealth system could also enable innovative test delivery methods, such as using text-messaging to assess veterans before they even set foot in the hospital. The VA has placed an increased emphasis on telehealth over the past several years to reduce the burden on hospitals while also delivering high-quality health care that does not require frequent visits to a hospital, a step many veterans resist because of time lost to travel and waiting rooms, as well as lack of access to transportation. The system also enables closer disease monitoring during a time when veterans’ hospitals are increasingly concerned about the danger of missed early warning signs and their patients’ troubles making the transition from military to civilian life.

Among collaborators on the project are David Xavier Cifu, M.D., national director of the Physical Medicine and Rehabilitation Program Office at the Department of Veterans Affairs, who also serves as a physiatrist at Hunter Holmes McGuire. The primary mentor on the project is Kurt Kroenke, M.D., Chancellor’s Professor of Medicine at the IU School of Medicine, a research scientist with the Center of Excellence on Implementing Evidence-Based Practice at the Roudebush VA Medical Center and an investigator at the Regenstrief Institute.

Dr. Kean said the greatest challenge for the research team will be adapting a telehealth system that up until now has been brought to bear on chronic conditions that require regular physical measures — such as collecting weight and blood pressure data from special scales and blood pressure cuffs that connect to the phone or Internet — to one that can effectively process self-reported statements from patients about their health.

“Traditionally, telemedicine has been used to collect objective measures,” he said, noting that the condition now under investigation will require processing answers to questions the system — as well as many soldiers — continues to struggle with.