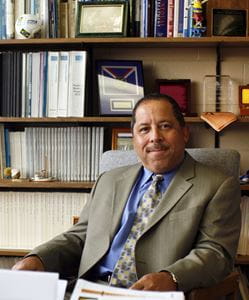 At the Indiana Joint National Public Health Week Conference on April 3 and 4, research presentations, networking mixers, speeches by national leaders and other activities are designed to give information and a motivational shot in the arm to practitioners, students and academics.

“Many of us in public health, particularly in Indiana, are scattered,” said Edwin Marshall, vice president for diversity, equity and multicultural affairs at Indiana University. “This brings together not only the leaders in public health but the people in the trenches. Networking, creating new channels of communication, is key to addressing some of the serious health challenges faced by Hoosiers.”

Highlights include keynote addresses by Adewale Troutman, M.D., director of public health leadership at the University of South Florida, president-elect of the American Public Health Association, and an internationally known expert in community activism and health equity; sexual health expert Michael Reece, co-director of the Center for Sexual Health Promotion at IU’s School of HPER, where he is associate dean for research and graduate studies; Washington, D.C., attorney Sharon Eubanks, a high-profile litigator with an interest in tobacco control; and McKenzie Scott Lewis, founder and CEO of The MSL Group, which offers transformation and diversity consulting services.

Indiana traditionally ranks poorly in major public health benchmarks, such as obesity, tobacco use, cardiovascular disease and diabetes. Because of this, Indiana University launched the IU Public Health Initiative, which includes plans to establish the state’s first two schools of public health.

Last summer, the IU Board of Trustees approved a request to change the name of the School of HPER to the IU School of Public Health-Bloomington, and to create a new IU School of Public Health-Indianapolis at IUPUI. While not enacted immediately, the vote allowed for the continuation of important developmental steps. The two schools are expected to build on the strengths of their respective campuses as they further a collective academic public health agenda.

“The IU School of Medicine, the School of Health, Physical Education and Recreation, and the other planning partners are contributive to finding solutions to issues impacting the state,” said Marshall, also a professor of optometry and adjunct professor of public health. He chairs the IU Public Health Coordinating Council, which oversees planning for the initiative. “Success will become even more evident as these schools of public health flourish and become engaged in identifying solutions to issues that we face as a society.”

Below are examples of presentations by more than 80 speakers.

IU researchers found that overweight adolescents who underestimate their weight are less likely to adopt behaviors to change their weight status. One-third of the overweight/obese youth in the study believed they were about the right weight or were underweight.

“Accounting for gender/race-ethnicity interactions, we found increased likelihood that certain racial/ethnic, gender and grade-level characteristics contribute to individuals’ underestimating their weight status,” said Robert M. Saywell, professor emeritus and senior investigator in the Bowen Research Center at the IU School of Medicine. He will discuss his study during a 10:30 a.m. session on April 4. “Overweight/obese adolescents with accurate weight perceptions were more likely to report trying to lose weight, exercise or eat less food to keep from gaining weight, and go without eating for 24 hours or more, compared to those who underestimated their weight status.”

Terrell W. Zollinger, professor in the IU School of Medicine’s Department of Public Health, is co-investigator. For the study, the researchers used data from the 2009 Youth Risk Behavior Survey, sponsored by the Center for Disease Control and Prevention.

Movement — how much is enough?

The term “outsourcing” isn’t usually associated with physical activity, but Jeanne Johnston, assistant professor in the School of Health, Physical Education and Recreation, wants people thinking about it as they consider how to reap the health benefits of movement on a day-to-day basis.

“My grandmother lived to be 91, and she never did a bit of formal exercise, but she was always moving. We’ve lost this, in part because our jobs have become sedentary,” said Johnston, whose research looks at unique and targeted ways of engaging different populations in physical activity. “We outsource physical activity as well, like mowing the lawn. Small modifications can make a big impact.”

Her presentation at 2:30 p.m. April 4 will address a variety of issues and challenges involved with the public’s understanding and adoption of physical activity guidelines. National fitness and physical activity guidelines have existed since the 1970s, yet obesity and inactivity are still considered major health threats nationwide. A challenge, Johnston said, is tailoring existing and new programs and messages to the specific needs of different populations, such as people who are older vs. younger, and rural residents vs. urban. Terminology — exercise vs. physical activity, for example — can be confusing.

Further complicating matters is the growing understanding of the negative health impact that sedentary behavior — like sitting at a desk all day at work — can have regardless of whether the national guidelines are met.

“Someone could meet the physical activity guidelines by working out for 30 minutes over lunch, but if they sit all day without extra periods of activity, they might be worse off than someone who does not ‘exercise’ but makes a point of consistently moving throughout the day,” Johnston said.

In a presentation titled “Addressing Food Safety Issues Associated With Ready-to-Eat Produce,” David McSwane, a professor in the Department of Public Health at the IU School of Medicine, will speak about cross-contamination of produce.

“Unfortunately, one-third of the major foodborne outbreaks that occurred in 2011 were associated with raw and ready-to-eat produce,” McSwane said.

Many of these problems occur, he said, as a result of cross-contamination of types of produce during packaging, but they can also occur from contact with other sources like pesticides, water, air, soil and animals. During his 2:30 p.m. presentation on April 4, McSwane will speak in depth about research he completed through on-site observations and interviews with produce growers in south Florida during spring 2011. He focused his research on those products that could support the growth of infectious micro-organisms that lead to foodborne disease outbreaks.

He will discuss how simple solutions like washing produce with water that contains chlorine, or other disinfectants, will destroy pathogens and limit outbreaks like those linked to cantaloupes last fall, and how the Produce Marketing Association and the Food and Drug Administration are considering these solutions to improve food safety standards. He said employee training to establish good cleaning of equipment and proper handling of materials that can cause infection should lead to a decrease in the number of outbreaks seen.

Bryan McCormick and Rasul Mowatt, professors in the Department of Recreation, Park and Tourism Studies in the IU School of HPER, will discuss “Public Parks & Recreation: An Unrealized Public Health Resource” during the 10:30 to 11:30 a.m. session on April 4. McCormick and Mowatt will speak on the developing partnerships between public health and parks and recreation providers.

“This is a new area of development for parks and recreation professionals, but one that is consistent with the origins of the organized recreation movement in the United States,” said McCormick, chair of the department. “The purpose of this session is to highlight the linkages of parks and recreation services to public health.”

By addressing the use and management of public space for public health, and offering suggestions about how recreation and service providers can partner with health service providers to encourage a health-conscious community, Mowatt and McCormick hope to address what role public recreation and leisure providers could play in reducing health problems for Americans. Mowatt and McCormick hope that putting parks and recreation services in terms of health benefits will help spur initiatives that will encourage active lifestyles, and mental and emotional well-being.

Other highlights include the annual student award announcement and lecture series April 4 in honor of Stephen J. Jay, M.D., for his lasting contributions to tobacco control. Jay, a practicing internist and pulmonary specialist, is a professor of medicine and public health at the IU School of Medicine and founding chair of the school’s Department of Public Health.