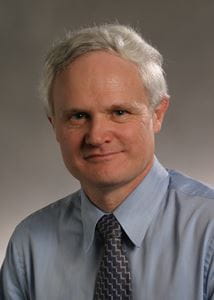 The committee will advise Veterans Affairs Minister Steven Blaney on specific veterans’ health issues. The committee’s first study will focus on depleted uranium, which has been used in some munitions as well as armored protection, such as tanks. There has been speculation that depleted uranium may be related to unexplained symptoms as well as negative health effects, although U.S. studies have not confirmed this.

“The Scientific Advisory Committee on Veterans’ Health will ensure that our government is using the most up-to-date information when considering veterans’ health issues,” said Minister Blaney. “Dr. Kroenke’s military and medical background will be crucial in examining veterans’ health issues. I congratulate Dr. Kroenke on his achievement and look forward to working with him and the committee.”

“Having served for 20 years as an active-duty physician myself in the U.S. Army Medical Corps and now working in the Roudebush VA Medical Center and VA Health Service Research & Development Center of Excellence on Implementing Evidence-Based Practice, I welcome the opportunity to provide input and advice on health issues experienced by veterans,” said Dr. Kroenke, an internist who is an internationally recognized researcher studying physical symptoms, especially pain, and their links to mental disorders including anxiety and depression.

“And what is especially exciting about this appointment is the opportunity to see things from the perspective of Canadian veterans, providing insight into similarities and differences between their health issues and those experienced by U.S. veterans, ” said Dr. Kroenke.

A graduate of Valparaiso University, Dr. Kroenke attended medical school at Washington University in St. Louis and completed a residency in internal medicine at Tripler Army Medical Center. After spending two decades in the military, he retired from the U.S. Army Medical Corps as a colonel.

In addition to authoring more than 280 peer-reviewed publications and receiving numerous teaching awards, he is the recipient of sustained research funding from the National Institutes of Health, the Department of Veterans Affairs and other U.S. government agencies, foundations and industry. He is a past president of the Society of General Internal Medicine and the Association for Clinical Research Training.