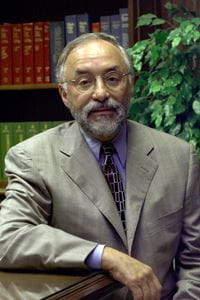 The awards were officially presented in Bloomington on Tuesday, Sept. 14, at IU Auditorium, in recognition of sustained excellence in service, achievement and leadership. McRobbie praised Gubar and Zipes for representing IU’s “collaborative scholarly spirit.”

Zipes, a physician and emeritus director of the IU School of Medicine’s Cardiology Division, is a member of the American Society for Clinical Investigation, the Association of American Physicians, past president of the American College of Cardiology and the Heart Rhythm Society and past chairman of the American Board of Internal Medicine.

He has published more than 750 articles and 18 books, and is a co-editor of Cardiac Electrophysiology, From Cell to Bedside and Braunwald’s Heart Disease, A Textbook of Cardiovascular Medicine. He has received the Distinguished Achievement Award, the Herrick Award and the Cor Vitae award from the American Heart Association, the Distinguished Scientist Award from the Heart Rhythm Society and from the American College of Cardiology, and Master of the American College of Cardiology and Sagamore of the Wabash.

The following have been endowed: the Medtronic Zipes Chair in Cardiology and the Joan and Doug Zipes Visiting Professorship at IU; the Douglas P. Zipes, MD Lectureship given at the Heart Rhythm Society Scientific Sessions and the Douglas P. Zipes, MD Distinguished Young Scientist Award given at the American College of Cardiology Scientific Sessions.

He was the founding editor of the Journal of Cardiovascular Electrophysiology and is now the founding editor of Heart Rhythm, the new journal of the Heart Rhythm Society. The Hon. Baron P. Hill, U.S. House of Representatives, read a tribute about Zipes into the Congressional Record on June 2, 2004. Zipes has a regular column for the Saturday Evening Post called “Heart Health: Ask Dr. Zipes.”

Gubar taught at IU for more than 36 years. Along with Sandra M. Gilbert, she published The Madwoman in the Attic: The Woman Writer and the 19th-Century Literary Imagination in 1979, a runner-up for both The Pulitzer Prize and the National Book Critics Circle Award. In 1985, the collaborators received a Ms. Woman of the Year award for their compilation of the Norton Anthology of Literature of Women, a work that appeared in a revised second edition in 1996.

Gilbert and Gubar followed up Madwoman with a critical trilogy titled No Man’s Land: The Place of the Woman Writer in the Twentieth Century: The War of the Words (1988), Sexchanges (1989) and Letters from the Front (1994). The two jointly authored a collection of poetry for and about mothers, MotherSongs (Norton, 1995) and a satire on the current state of literacy and cultural literacy, Masterpiece Theatre: An Academic Melodrama (Rutgers, 1995).

The recipient of awards from the National Endowment for the Humanities and the Guggenheim Foundation, Gubar published a book on the centrality of cross-racial masquerade in American fiction, photography, painting, and film: Racechanges: White Skin, Black Face in American Culture (Oxford, 1997). She put together a collection of her essays in a book, Critical Condition: Feminism at the Turn of the Century, which was published by Columbia University Press in 2000. She spent a year as a Laurence S. Rockefeller Fellow at Princeton University’s Center for Human Values to complete Poetry After Auschwitz: Remembering What One Never Knew, which was published by IU in 2003. Also in 2003, she was the recipient of The Faculty Mentor Award from IU’s Graduate Professional Student Organization.

In 2006, Gubar published Rooms of Our Own, which won an Honorable Mention award from the Gustavus Myers Center for the Study of Bigotry and Human Rights. In 2007, Gubar and Gilbert published a third edition of the Norton Anthology of Literature by Women as well as a Norton Reader of Feminist Literary Theory and Criticism. Gubar’s cultural biography of Judas, the twelfth apostle, was published by W. W. Norton in 2009. Judas was listed in Magill’s Literary Annual as one of the best books of 2009. Currently, Susan Gubar is editing A Feminist Facebook, a collection of autobiographical essays by the first generation of women to integrate the study of gender into such disciplines as philosophy, art history, comparative literature, religion, psychology, anthropology and African American studies.

The President’s Medal for Excellence is a reproduction in fine silver of the symbolic jewel of office worn by the president at ceremonial occasions. Criteria for recipients include distinction in public service, service to IU, achievement in a profession and/or extraordinary merit and achievement in the arts, humanities, science, education and industry.