Immunotherapy holds tantalizing promise for treating all forms of cancer. Now, Huda Salman is trying to harness it at IU School of Medicine. And it starts with getting a clinical trial off the ground. 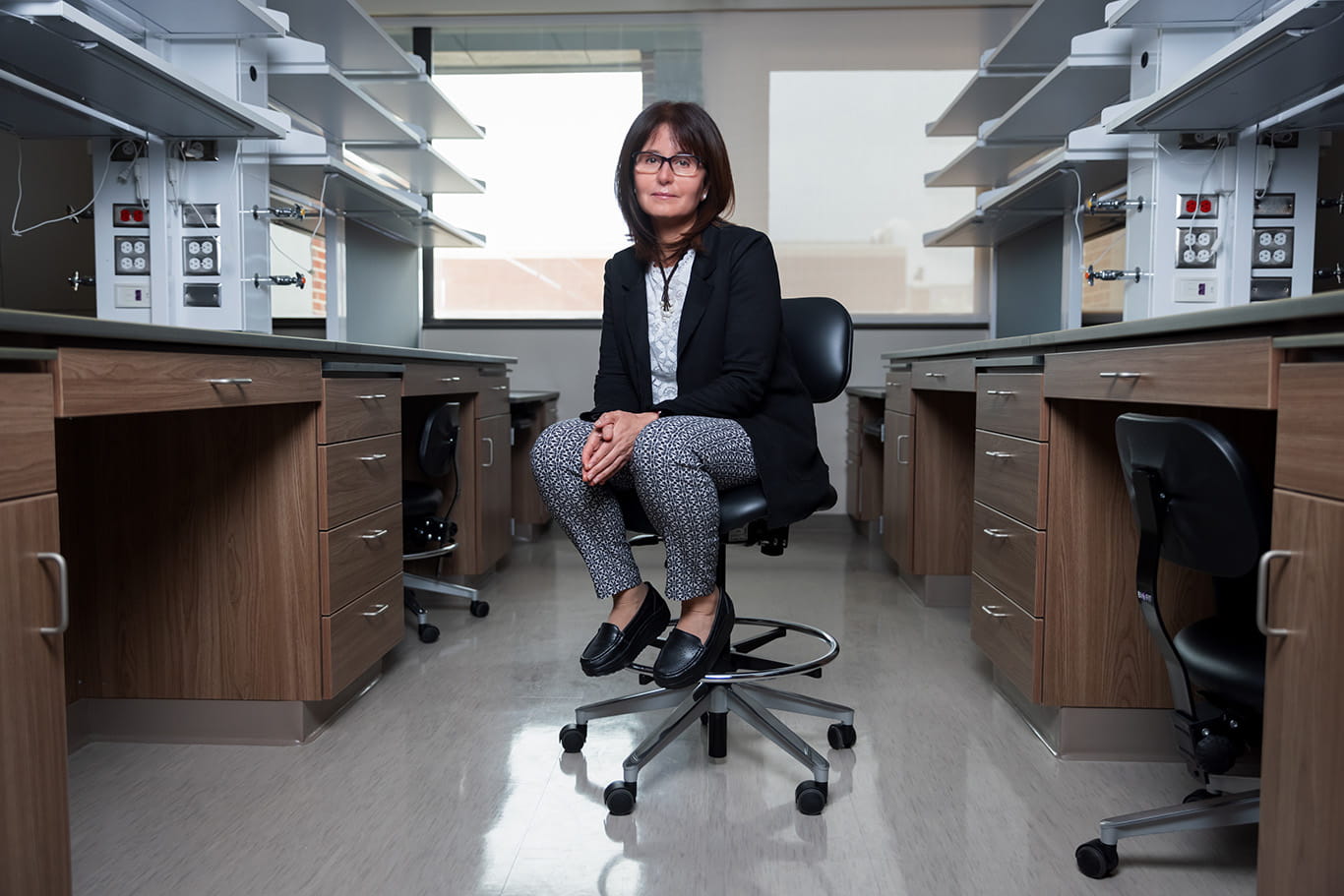 USING GLOVED HANDS, Christina Vaughan gently squeezed a pipette trigger and slowly dribbled drops off a clear chemical solution into a flask, which she immediately placed into an incubator and warmed to 98.6 degrees. To the naked eye, it was just routine lab work. But, at a microscopic level, something phenomenal was about to happen—a rapidly accelerating process that would soon grow millions of trained cancer killers: chimeric antigen receptor T cells. In little more than a week, Vaughan, a lab tech in IU School of Medicine’s new Cell and Gene Therapy Manufacturing Facility, grew 300 million CAR T cells. And this was only a practice run. Until now, Vaughan has been limited to producing just a few million cells over similar periods—or thawing out bags of cells shipped from manufacturing sites elsewhere around the country. But the days of shipping and small-scale production are almost over. The School of Medicine—more specifically, the Brown Center for Immunotherapy—is about to begin making mass quantities of CAR T cells on a routine basis.

Five years after it was created with a $30 million gift from IU School of Medicine alumnus Don Brown, MD, the center is poised to make the school a player in the revolutionary effort to greatly enhance the immune system’s ability to fight debilitating diseases, including cancer. Chosen to get the program rolling is Huda Salman, MD, the center’s first director. Her immediate tasks include courting top talent, fleshing out research priorities, and, most importantly, launching innovative clinical trials. It will take time and money. But Salman arrived with some valuable assets—a Phase I trial that will allow IU to put its top-tier facility to good use, along with something even more important: a clear vision.

“The opportunity we have here is completely different,” she said. “This is about building an immunotherapy program that doesn’t just involve one discipline, but all tumors.”

EERIE SILENCE GREETS anyone stepping out of the elevator in the Medical Research and Library building and into the fifth-floor home of the Brown Center. Along a corridor, labs are pristine—and dark—as they await occupants. In a warren of offices, Salman and her assistant are, for now, the sole tenants. It’s a daily reminder of the job ahead.

Salman came to IU from Stony Brook University in New York. Initially, she was vetted as a potential director of hematology and oncology. But Kelvin Lee, MD, director of the IU Melvin and Bren Simon Comprehensive Cancer Center, also saw that her resumé made her an appealing option for the immunotherapy program. Salman was already doing exciting work with CAR T cells, having secured a $3.1 million federal grant. And she was doing it at a relatively small medical school that lacked facilities to make those CAR T cells on-site.

“The impression was that she is somebody who gets stuff done,” Lee said. “That was the major draw in recruiting her.”

Salman’s initial research work, at the Medical College of Georgia, focused on finding and explaining cancer-driving genes that influence tumors—and therefore can become targets for traditional drugs. But when she arrived at Stony Brook, Salman found her colleagues were focused on the rapidly evolving field of CAR T cells, which refits immune cells to seek out and attack tumor cells. Seeing that her expertise overlapped with their work, she pivoted.

CAR T involves extracting T cells, a staple of our immune system, from a patient and sending them to a lab for reengineering—to recognize a specific antigen on the surface of a cell. That’s done by installing a chimeric antigen receptor. Once these cells are tweaked, millions of them are grown and infused back into the patient, where they remain for years as a roving cancer patrol.

The approach is revolutionary and also relatively fast. A pharmaceutical company might spend up to 15 years developing a cancer drug. Salman and her colleagues at Stony Brook cranked out six antigen receptors in two years. “Other researchers might not like to hear me say this,” Salman said, “but immunotherapy is something that can be fruitful and productive so much faster.”

After one of their receptors proved especially promising, Salman joined her colleagues at a small start-up called iCell Gene Therapeutics. Unlike previous treatments—aimed at B-cell cancers—the start-up’s new CAR T therapy would tackle peripheral T cell lymphoma, a rare group of cancers with a survival rate of only 40 percent.

By 2017, early data showed those modified T cells, which sniffed out an antigen called CD4, worked in tumor cell lines and in animal models. The next step was to launch a clinical trial. As the trial’s lead investigator, she authored scores of protocols, including for patient recruitment, cell infusion, and managing patients whose immune response put them in the ICU. Every Friday, she convened a team to review the applications.

In August 2018, the FDA signed off on a joint clinical trial. Under the plan, Salman would help recruit patients at Stony Brook, where they would have blood samples collected and their T cells processed. Those cells would be shipped to the University of Louisville, which had a facility capable of inserting iCell’s receptor and nurturing the CAR T cells. Finally, those modified cells were frozen, shipped to New York, thawed out, and infused into patients.

“She managed the whole operation herself,” said Nabil Hagag, PhD, who oversees the stem cell lab at Stony Brook’s cancer center and heads up regulatory matters for iCell. “You have to put together the right team for it. If you don’t have the right scientific people, the right nurse practitioners, the right labs, you can’t move forward.”

Salman recruited a pair of patients for the trial, including a 19-year-old who had undergone high-intensity chemotherapy and a failed bone-marrow transplant. The patient’s family was aggravated and exhausted. When Salman suggested he become the first enrollee, she was met with skepticism. “After all he’s been through,” Salman said, “you understand why he’s hesitant.”

Yet, convinced it was their sole option, the family signed on. Six weeks later, the teen’s lymphoma was in remission—with no side effects.

It was around then that IU reached out to gauge Salman’s interest in applying for the Brown Center director role. She hesitated. “I had just established the trial in the last year,” Salman recalled. “It was a little bit hard to leave that behind.”

But the more Salman weighed the opportunity, the more sense it made. At Stony Brook, faculty chose trial candidates recruited by a single office. The school also lacked a facility to make CAR T cells, which necessitated the partnership with Louisville.

At IU, the Brown Center could recruit patients from across Indiana. It had its own manufacturing facility. And the longer Salman looked, the more collaborators she saw. “They had this huge intention to make this program successful,” she said. “Everything here is a good equation for success.”