Access to primary care can be a challenge for some Hoosiers. Three outreach clinics staffed by IU medical students help fill the gap. 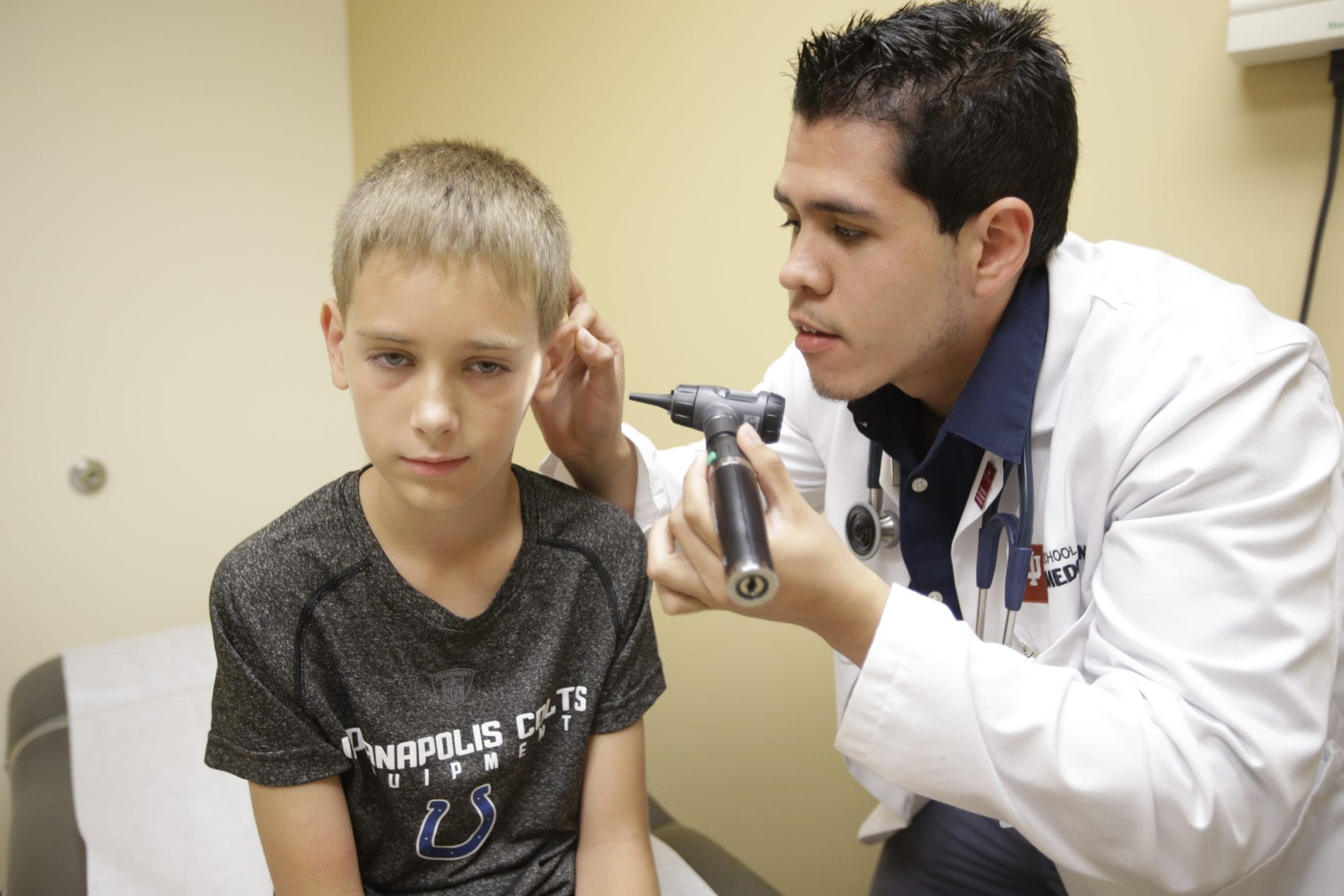 INSIDE A cramped meeting room, the squeak of a felt tip on a white board cracked the silence.

Standing before 10 future physicians, Bob Ehresman, MD, explained how to craft a note on a patient’s chart, detailing how he would document symptoms for chronic obstructive pulmonary disease. The medical students from Indiana University School of Medicine–Terre Haute nodded slowly and furiously wrote down his advice.

They had plenty of questions about other topics, too.

What if a patient needs a neurological consult? What if a woman came in seeking a year’s prescription for birth control? How should they handle a patient with Type 1 diabetes who hasn’t been seen in a while?

Ehresman, a family medicine physician at nearby Union Hospital, let a smile crease his face and patiently dispensed answers. Snapping a lid back on his blue marker, he adjourned the meeting 10 minutes later. “All right,” he said. “I’ve tortured you enough for one day.”

The medical students filtered into the hallway of the Landsbaum Center for Health Education and looked at the hands of a nearby clock. For the next four hours, they would be practitioners under Ehresman’s careful watch, staffing the Mollie R. Wheat Memorial Clinic. Like similar student outreach clinics in Indianapolis and South Bend, the clinic serves a dual purpose: providing vital care to patients at the fringes of the health care system, and giving medical students exposure to what it’s like to practice medicine.

“Very early on they start getting more of the experience of actually being a doctor,” said Jay L. Hess, MD, PhD, MHSA, who as dean of the School of Medicine would like to see a student outreach clinic associated with each of the school’s nine campuses. “Students start off doing histories and later as they progress they do histories and physicals. As they do, they become more comfortable working with patients. They develop their interpersonal skills and get rid of some of the awkwardness of working with people they haven’t met before. By the time they get on the wards or in the clinics they can focus more on learning medicine because they already have gotten this under their belt.”

WHILE EACH of the IU School of Medicine’s student outreach clinics serves different parts of the state, their patients share common challenges. They live on the margins. Money is tight. A traditional doctor’s appointment conflicts with work. They’ve put off care for a couple years, and aren’t able to stretch their blood pressure medication anymore or keep their diabetes under control.

“The symptoms are so unbearable that they need somewhere to go,” said Mark Fraser, an MD/PhD student who helps lead the Navari Student Outreach Clinic in South Bend. “They’ve been going to the E.R. instead of a regular physician. We pick them up like a safety net.”

In Terre Haute, residents in outlying areas have few options other than the clinic. There are just 46 primary care physicians working in the five counties surrounding the metro area, a common problem in a state where only 13 percent of doctors work in rural areas. Meanwhile, the commute to Terre Haute from small towns like Linton or Greencastle may take 40 minutes or more.

“There simply aren’t enough of us to take care of everybody,” said Ehresman, who acts as the Wheat Clinic’s medical director.

For the clinics in South Bend and Indianapolis, the patient population is concentrated more locally. Many are homeless, and others are immigrants who require Spanish-speaking translators.

For many patients, paying for regular care is out of reach. In 2016, a projected 207,200 residents in the three counties where student outreach clinics are located—Vigo, Marion and St. Joseph—lacked insurance, according to the Robert Wood Johnson Family Foundation. Meanwhile, the median household income in the counties ranges between $40,000 and $45,000, meaning many residents make too much money to qualify for Medicaid but can only afford high-deductible insurance plans.

“We’re trying to fill the center of that donut,” said Michael Keller, a third-year medical student and chair of the Terre Haute clinic’s board.

ON THIS SATURDAY in Terre Haute, an 11-year-old boy needs a sports physical, and a 63-year-old woman is seeking lab tests for hyperthyroidism and anemia. While she has seen a slew of doctors, there were long gaps in her care.

“Primary care gets put on the back burner for a lot of people,” said Jeffrey Watts, a rising fourth-year student from Vincennes.

This is the niche filled by the outreach clinics. Their clientele grapples with unmanaged chronic conditions such as hypertension or diabetes, which can require lab tests and prescription refills. Women seek out basic gynecological care and screenings.

The Indianapolis clinic, founded a decade ago and housed in a church on the east side of the city, also provides some specialty care. This year, for example, students added a head-and-neck cancer screening program, and they are able to do follow-up visits with women who take part in mammography screening days. Medical students in Indianapolis also have multiple partners, such as the IU School of Dentistry and the Butler University College of Pharmacy, to offer patients a range of services.

Unlike the Indianapolis clinic, the Terre Haute and South Bend clinics are only three years old. They offer vision, cardiac or breast cancer screening when they’re able to secure funds to supplement their operating budgets. In 2016, the Terre Haute clinic received $7,000 in mini-grants, money that helped purchase an EKG machine and a desktop computer—used to give patients printouts to take to specialist appointments.

THOUGH MONEY IS tight, none of the clinics scrounge for student volunteers. Last year, almost 85 percent of the respective student bodies in Terre Haute and South Bend signed up for a shift, and almost 300 students participate annually in Indianapolis.

Demand rarely ebbs. For example, the 13 slots made available each month at the Indianapolis outreach clinic are snapped up in less than an hour. In Terre Haute, board members police the online document that acts as a sign-up sheet to keep students from cutting in line.

“Still, that’s the best problem you can have,” said Hilary Schroeder, who serves as vice-chair on the Terre Haute clinic board.

Among first- and second-year students, giving up a few hours on a Saturday goes beyond giving back. It’s an early preview of their clinical experience, particularly for those looking to enter family medicine. In the clinics, medical students may take a full history and write their first notes within a couple weeks of volunteering. They then observe a third- or fourth-year student fill in any gaps and witness that student work with a volunteer physician to reach a diagnosis.

The clinics, at their core, can serve as a funnel directing patients back toward consistent primary care. The Navari Clinic, for example, has a social worker to help its clients find documents and sift through paperwork to enroll in state and federal health care programs. In Indianapolis, the clinic’s social worker steers patients to Eskenazi Health Advantage and HealthNet, which help low-income patients sign up for insurance.

“You can see what’s expected of you, and where you should be in a year or two,” said Ronit Patnaik, a rising fourth-year medical student and chair of the Indianapolis outreach clinic.

The pace of the clinic’s operations is also conducive to learning. Not only do students have a chance to see more patients, they also get to spend more time with them than would typically be the case in an everyday outpatient setting. At the Navari Clinic, there’s no time limit for a consultation. “You can spend up to two hours interacting with a patient and make sure they feel served by the medical community,” Fraser said.

“That allows us to at least insure the patient minimally,” Patnaik said. “Then we can connect them to the formal health care system to get any specialty care they might need.”

Allison Williams, a student at Indiana University School of Medicine—Terre Haute, knows what it’s like to overcome access issues to health care. As a child with Type 1 diabetes, the nearest specialist was in Indianapolis, a two-hour drive from her hometown.

WHEN ALLISON Williams volunteers at the Wheat Clinic in Terre Haute, the patients she sees are not strangers. They remind her of neighbors in her hometown of Linton, Indiana. They could be parishioners who sit next to her in church. They are the hair stylists at a local salon complaining about a bum ankle. Or elderly residents who often tell her, “We wish you were our doctor.”

“We don’t just know them as patients in an exam room,” she said.

And Williams knows part of their struggle, too. Growing up, she was diagnosed with Type 1 diabetes, which required a two-hour drive to Indianapolis for appointments. Fortunately, her mother was a middle-school science teacher and her father worked as an electrical engineer—careers that offered flexible schedules. “That’s not always the case for people in my communities,” said Williams, whose goal is to stay in the Wabash Valley and work as an endocrinologist.

Giving up a few hours on a Saturday morning can remind her—and many of the students who volunteer—why they were inspired to become physicians in the first place.

“I really like helping people,” Williams said. “I like talking with the people who come in. They’re so grateful for these services. They’re not complainers. They don’t have any health care.”

If you would like to support student outreach clinics in Indianapolis and Terre Haute, contact Caitie Deranek Stewart at cderanek@iu.edu or 317.278.2133. To help the clinic in South Bend, contact Kellie Porter at kelaport@iu.edu.