The Freedom to Thrive

The daughter of immigrants and a former Navy medic, Guadalupe Jimenez pursues her calling at IU School of Medicine. 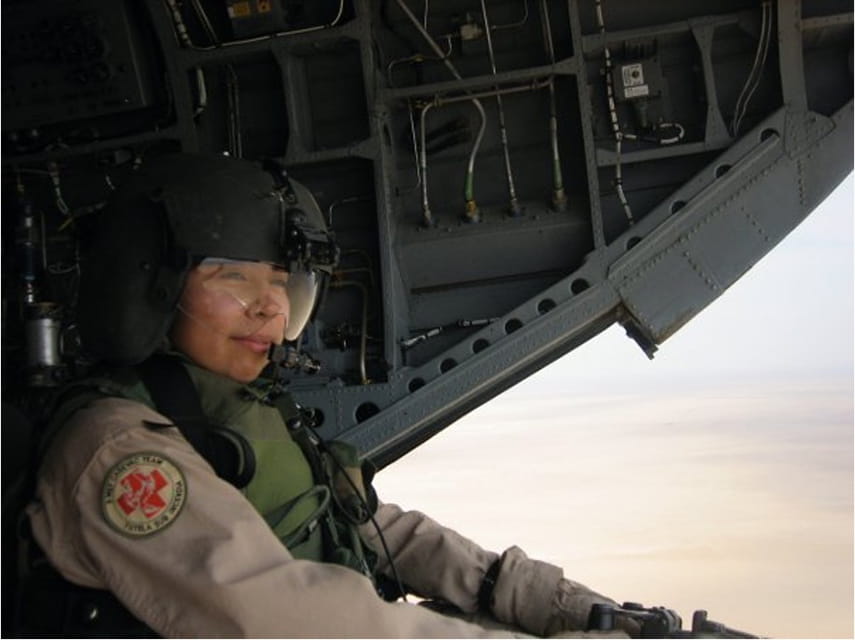 Before pursuing her studies at IU School of Medicine, Guadalupe Jimenez served tours in Iraq and Afghanistan as a Navy medic.

AS A HIGH school senior, Guadalupe Jimenez sat in her counselor’s office waiting to get some guidance on her next step in life.

Her parents had immigrated from Mexico when she was still in her mother’s womb. Growing up in Brooklyn and on Long Island, their situation had been anything but easy. Her father worked multiple jobs but she and her siblings still relied on the public schools for two meals a day, and their local Catholic parish helped with clothes. As she got older, Jimenez had to balance school with jobs of her own.

As a radio in the counselor’s office droned on in the background, Guadalupe was considering a career in nursing—she wanted to help people. But she wasn’t sure if she could afford school. Then, her life changed in an instant. The radio began broadcasting news of a plane crashing into the World Trade Center. And then a second, followed by the collapse of the buildings. It quickly became clear that it was terrorism—forces aiming to strike fear in American hearts.

“I wasn’t having that,” Jimenez said. “The world stopped for us. You have anger, you have all these emotions, and you want to turn it into something good.”

After some thought and prayer, Jimenez enlisted in the United States Navy, training as a hospital corpsman—a medic. Her training would take her on deployments to both Iraq and Afghanistan—and eventually to Indiana University School of Medicine, where she is now a fourth-year medical student.

JIMENEZ WAS TWICE deployed to Iraq, where she worked in shock trauma platoons and as a corpsman who evacuated wounded troops from combat zones via helicopters, often under hostile fire. “I learned how to care for my patients, and how to connect with them so they knew I would do everything I could to save them,” she said.

The experience started Jimenez down her path to a medical career. She earned a biology degree from Stony Brook University, but the call to serve remained. She enlisted in the Navy Reserve and was soon deployed to Afghanistan, attached to an Army unit.

Upon her return, Jimenez began working with a retired Navy physician at a New York hospital, serving struggling families that reminded her of her own. “I knew I had to help them,” she said. “It was at that hospital, on those late nights, that I decided to become a physician.”

The question was where?

Jimenez researched more than 200 schools. Eventually, she settled on IU School of Medicine, drawn by the Masters of Medical Science program. “It fit everything I was looking for,” she said. “A challenging program that would set me up for success.”

Initially, she had to rely on loans, and Jimenez struggled to get by. She was choosing between gas and food. At times, she was paying her rent with a credit card. But thanks to generous scholarships, the financial pressure began to ease. She no longer had to choose which bill to pay.

“I had the freedom to thrive,” Jimenez said.

Freedom to Thrive was the title of her presentation in August during the School of Medicine’s MEDTalk event. In her remarks, Jimenez also spoke of a final hurdle she and her family cleared just this year: bouts with COVID-19. Back in the Bronx, her mother, sister, two aunts and some cousins contracted the virus. Jimenez went home to help them and contracted the virus as well. Her own illness was relatively mild but her mother and aunts were hospitalized. All recovered, something Jimenez describes as “a true miracle.”

Upon hearing her story at MEDTalk, Dean Jay L. Hess thanked Jimenez for her service to the nation and for her desire to serve others.

“Your perseverance through so many challenges is a great lesson for all of us. You are already making us proud,” he told her. “And in a few months, I look forward to calling you, ‘Dr. Jimenez.’”

Jimenez’s journey is such a testimony to perseverance and grit that this summer she was named a 2020 Tillman Scholar—an award given to service members who demonstrate service, scholarship, leadership and an impact in their communities.

The award is named for Pat Tillman, a professional football player with the Arizona Cardinals, who left his sports career and enlisted in the U.S. Army in June 2002 in the aftermath of 9/11. An Army Ranger, Tillman served several tours in combat before he was killed in the mountains of Afghanistan in 2004. Jimenez was one of 60 honorees selected from more than 1,700 applicants.

After serving in combat zones, where she was among the first on the ground to treat battlefield injuries, and remaining calm under pressure a requirement, Jimenez decided to pursue a career in emergency medicine.

“Running toward the fire,” Jimenez said. “That’s where my heart lies.”