Helping Babies to a Healthy Start 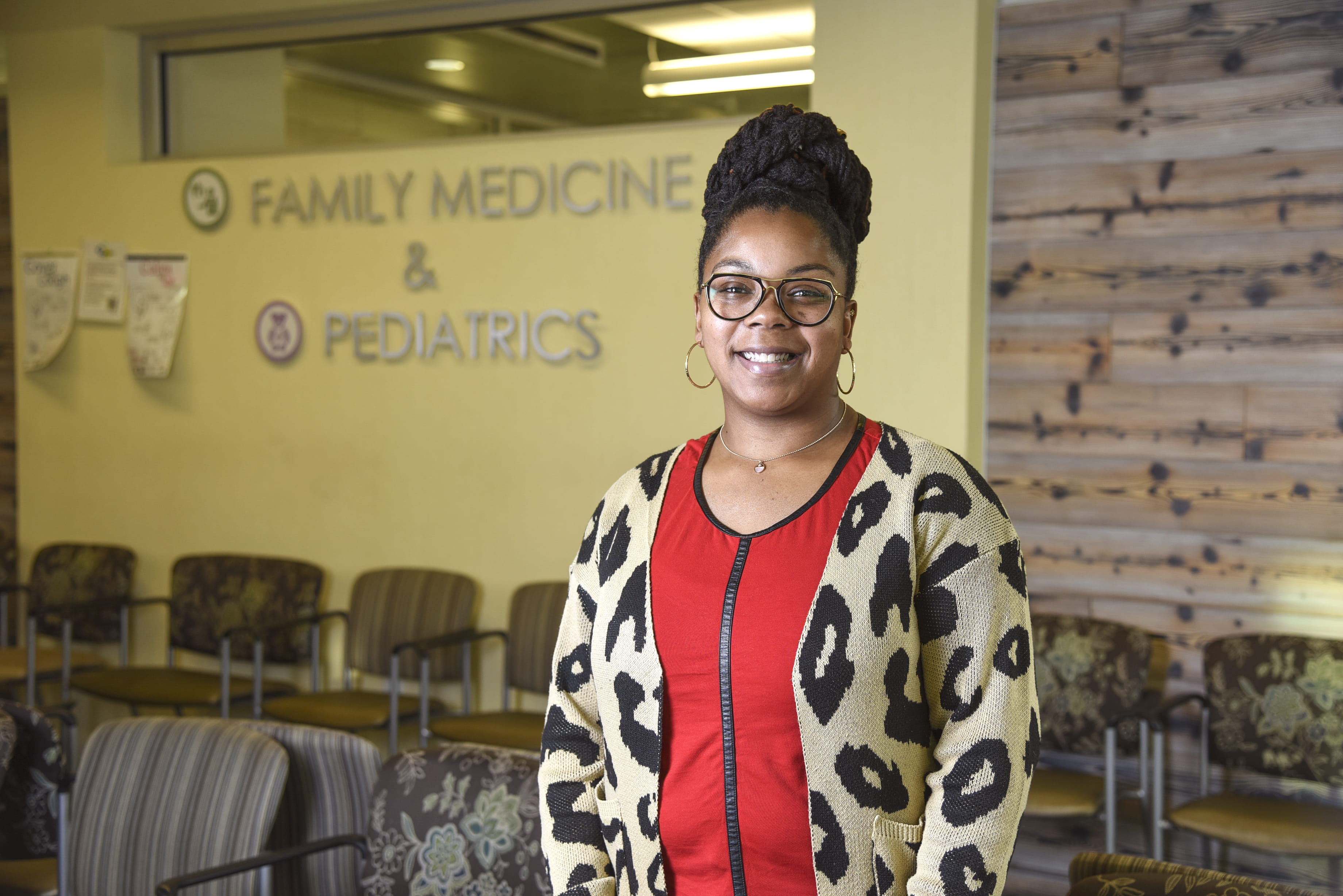 LATASHA TIMBERLAKE has some catching up to do.

At a community health center on Indianapolis’ southeastside, she scrolls through her daily schedule—meetings with a list of expectant mothers she counsels through pregnancy. She replies to a pile of texts and e-mails—mostly questions from the women on her list. Later, she’ll pick up clothes from a local charity to deliver to a woman who delivered a baby the day before. The drop off will offer her another chance to check how the mother is settling in at home.

“Just making sure she has all the necessities,” Timberlake said. “You know, a Pack ‘n Play, a car seat and different things to ensure the baby is safe.”

Across Indianapolis, a dozen workers like Timberlake are helping over 2,000 at-risk women navigate the ups and downs of pregnancy. They dispense bus passes, use targeted text messages to coach them to quit smoking, and pass along the best places to get fresh fruits and vegetables.

They are the linchpins of a program called WeCare, developed by an Indiana University School of Medicine researcher who gained the inspiration for it far from the Hoosier heartland—in Kenya. Its goal is straightforward—to lower Indiana’s shockingly high infant mortality rate.

EVERY YEAR, 600 babies born in Indiana don’t live to see their first birthday. At school age, that would be enough children to fill 24 kindergarten classrooms.

In a category no state wants to contend for the lead, Indiana has the nation’s seventh–highest infant mortality rate. That the state has held the spot for all but one of the past 35 years is a grim reflection of Indiana’s overall health.

“If you look across the world, infant mortality is a quintessential indicator of public health outcomes,” said WeCare founder Debra Litzelman, MD, the D. Craig Brater Professor of Global Health Education at IU School of Medicine and a senior research scientist at the Regenstrief Institute. “If infant mortality is a concern, this is emblematic of many other underlying public health concerns.”

To address the crisis, the Indiana Department of Health in 2013 declared that lowering the infant mortality rate was chief priority. In the last two years, state lawmakers set aside more than $20 million to fund grants for potentially innovative programs. And IU School of Medicine made infant mortality part of its strategic plan to improve the state’s health.

If infant mortality is a concern, this is emblematic of many other underlying public health concerns.

Babies die for any number of reasons. Most common are premature birth and low birth weight, which are often downstream consequences of poverty, stress, food insecurity, substance abuse, and poor access to health care.

The most at-risk babies in Indiana are born to mothers between the ages of 15 and 20 and who had fewer than 10 prenatal visits. A state task force found that nearly one-third of these young expectant mothers didn’t see an obstetrician in their first trimester—another category where Indiana lags behind the rest of the country.

Contributing to the problems is that pregnant women in Indiana are more prone to obesity than women in other states and that they smoke during pregnancy at twice the national rate.

For African Americans, the problems are even more pronounced. The rate of infant death is almost three times higher for black women than it is for white women.

Few understand the complexity and frustration of the problem as well as Indiana Health Commissioner Kristina M. Box, MD’83, who spent 30 years as an OB/GYN in Indianapolis.

For too many expectant mothers, Box said, health care is about more fundamental issues than their interactions with a physician. “Do they have a roof over their head? Are they worried about transportation? Some of those major socioeconomic barriers can prevent them from getting into care and sustain that care for themselves and then establishing that care for their newborn.”

Litzelman’s solution to what she calls this “potpourri” of issues was inspired by her experiences serving with AMPATH, the landmark partnership between Kenya, IU and other North American universities. In Kenya, she saw up-close how community health workers played a crucial role in tackling an HIV crisis. Community members trained through AMPATH went door-to-door to encourage their neighbors to get screened for the virus. If they were HIV positive, the community health workers would link them with clinical sites and follow-up to help them stay on course with treatment.

The result, in Indiana, was WeCare, which hires and trains local workers, such as LaTasha Timberlake, to recruit and connect with pregnant women.

In 2015, Litzelman landed a $500,000 grant to launch pilot sites in Indianapolis and Muncie. Two years later, the state Health Department awarded WeCare an additional $2.1 million to scale up operations in Indianapolis, home to six ZIP codes with some of Indiana’s highest infant mortality rates.

Philanthropic support could enable Litzelman and WeCare to replicate the model in other high-risk ZIP codes and counties around the state.

Box said WeCare is built on decades of research that shows home visits and family support can improve outcomes. “The other thing that they’ve done very well,” Box said, “is they have chosen their health workers from that very high-risk population we’re trying to address.”

WeCare’s workers operate out of community health centers, putting them in close quarters with clinical providers, social workers and others who can help expectant mothers. But the impact of the program is tied to personal connections between the health workers and the women.

WORKING NOW FROM a converted exam room in the HealthNet Barrington Health and Dental Center, Timberlake has seen her own trials. Growing up, she watched her mother battle drug use. Her father was physically abusive. By 14, Timberlake fled the chaos and was briefly a ward of the state. By 20, she gave birth to the first of her two sons.

Now 36, Timberlake knows she wasn’t entirely prepared to become a mom. Steadily, she improved her life. She completed training to become a birthing assistant. That led to a job as a family support specialist with Healthy Families Indiana, a state-funded home visitation program. When funding ran out for the Healthy Families position, Timberlake earned a degree in business management, served as a correctional officer with the Indiana Women’s Prison and later became a bank teller. Then, last year, she learned WeCare was hiring. The idea behind it resonated with her. “I’ve always had a passion for working with young girls,” Timberlake said. “I just felt I would be a great person to share my story.”

Sometimes, the job is as straightforward as reminding a 17-year-old that the final trimester isn’t the time to miss a doctor’s appointment. And then there are the conversations to nudge a hungry expectant mom to eat yogurt instead of potato chips.

I’ve always had a passion for working with young girls. I just felt I would be a great person to share my story.

A background in health care isn’t a prerequisite for workers. “We’re talking about the fundamental skills of relationship building,” Litzelman said. “If they’ve got that as a core competency coming in, we can teach them everything else.”

The bulk of Timberlake’s work takes place over the phone, but she also invests in sit-downs with the women. The conversations can be tinged with intimacy. Women confide in her about how romantic relationships have changed during pregnancy, and about self-confidence issues—topics that are easier to address face-to-face.

“You can actually see what’s actually going on by looking at a person’s eyes,” Timberlake said. “The way that they talk. Their hand movement.”

The connection between the We Care worker and the mothers can help at crucial moments, too. When a mom is battling depression, the worker might connect her with mental health resources that make a difference. Litzelman is adamant that the presence of a community health worker is essential in such cases.

“Hands down,” she said. “It’s the continuity. It’s being there through the roller coaster. It’s the glue between visits with the doctor, a psychiatrist, and a behavioral health counselor.”

CALCULATING WHETHER WeCare is putting a dent in Indiana’s infant mortality rate will take some time.

There are immediate ways to evaluate the program, such as whether women are participating in prenatal care, establishing breastfeeding, and getting the support they need to stop smoking during pregnancy.

But children must reach their first birthday before they filter into Litzelman’s data at Regenstrief. With partial results, she’s cautiously optimistic that WeCare will report a mortality rate below the state average. Litzelman expects a full analysis to be ready early in 2020.

To learn about how you can help mothers and babies get off to a healthy start, contact Stacy Robinson at starrobi@iu.edu or 317-274-3602.