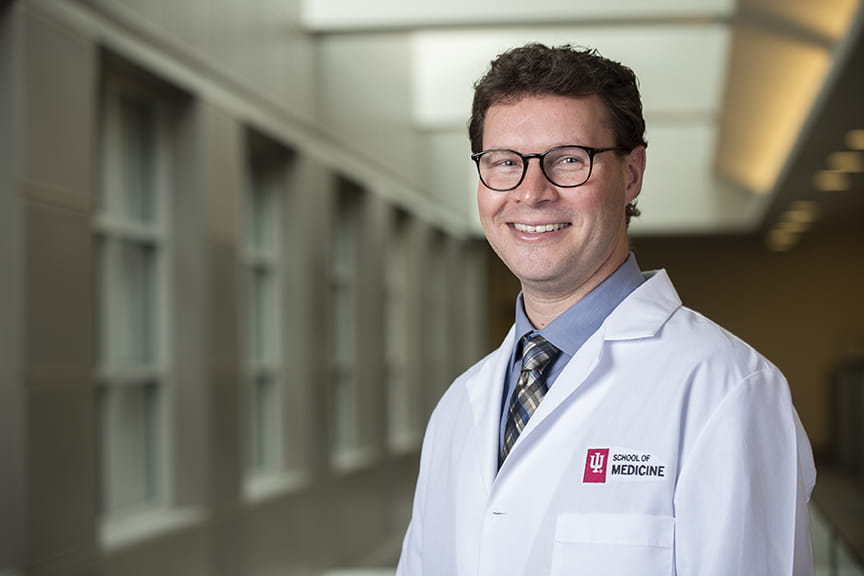 Adrian Gardner, MD, MPH, has been named associate dean for global health and director of the IU Center for Global Health.

WHEN ADRIAN Gardner, MD, MPH, was named head of IU School of Medicine’s global health program—including its work in Kenya—some said he was standing on the shoulders of giants.

In the 30 years since IU began its academic health partnership in Kenya, the program, skillfully guided by Bob Einterz, MD, and embodied by Joe Mamlin, MD, has become almost legendary. It has provided care to more than 150,000 patients with HIV and AIDS, helped train a generation of doctors in Kenya, and established a health system that serves a region of 8 million people.

Yet Gardner, who in February succeeded Einterz as associate dean for global health and director of the IU Center for Global Health, is not exactly a newcomer to the endeavor.

Since 2012, Gardner has served as executive field director for AMPATH, the consortium of 12 North American universities that works in collaboration with Moi University and Moi Teaching and Referral Hospital. And his experience with AMPATH goes back even further—he engaged with the program while still a medical student at Brown University in 2001. Despite the dues he’s paid in the program, Gardner doesn’t mind the shoulders-of-giants references.

“It has been a real privilege to work so closely with Bob and Joe over many years. I feel very lucky to have been mentored by these amazing individuals,” Gardner said.

Gardner spent the past seven years living in Kenya, but he will now be working from Indianapolis. His job: ensure the Center for Global Health supports and develops the efforts in Kenya and supports IU faculty engaged in global health work elsewhere in the world.

“Adrian has proven himself as a leader who is respected by his peers in the field of global health and as a caring clinician who leads with care and is cherished by his patients,” said Einterz. “I am confident Adrian will advance the mission of the center and will elevate IU into an even greater role in global health.”

IU School of Medicine Dean Jay L. Hess said Einterz, Mamlin and others—through the support of generous donors—have built IU and the AMPATH partnership into recognized leaders in global health. “I am confident that Dr. Gardner is the ideal person to build on that legacy and extend the reach and impact of our global health programs,” Hess said.

Einterz, IU’s first team leader in Kenya, retired from IU but has no plans to take it easy. He’s now taking the lessons he learned in population health from Kenya to South Bend, where he’s serving as the St. Joseph County Health Officer.

Gardner said their physical presence will be missed, but he knows how to reach them for advice and support. Better yet, he said, “the lessons they have taught me and others will continue to guide our decision-making process.”