Jane Ransel is like many pancreatic cancer patients. An innocuous ache turned out to be the only clue about a disease that can evade detection and slough off conventional therapies. The IU Simon Cancer Center has a team of scientists working to improve detection, screening and treatment. 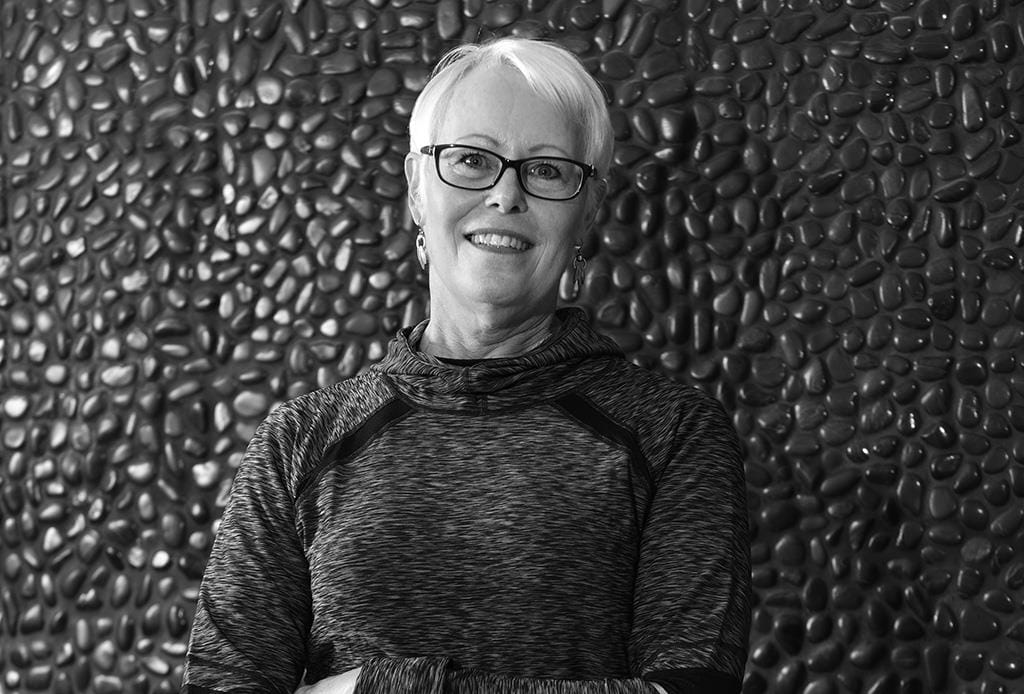 THE CREEPING ache nagged at Jane Ransel. As she watched movers load up boxes headed to her new home in Westfield, Indiana, Ransel told her husband it was probably just a mild strain from packing. “It was just like this finger was pressing against my stomach,” she said. Still, the discomfort lingered. So Jane scheduled a rare trip to her family physician. A couple of days later, she was taken aback when he unveiled the results of an ultrasound: A mass resting in her pancreas and liver.

“You can never prepare for that,” she said.

Pancreatic cancer is as cunning as it is cruel. The disease kills upwards of 40,000 people annually, and is often only detected after silently metastasizing for up to two decades. By the time physicians unmask it, the cancer has usually spread, leaving a prognosis of just a few months. After five years, only 2.3 percent of patients with Stage IV disease are still alive.

For decades, researchers studying pancreatic cancer have faced a frustrating task. Its symptoms—abdominal pain, bloating, and jaundice—are easily ignored. Usually, the disease is so advanced when found that surgery is off the table, meaning physicians can only try to attack it with chemotherapy or sear it with radiation. Even then, the tumor may be so fibrotic and dense that it’s hard for these weapons to reach nests of cancer cells. Worse, the tumor uses natural selection as a weapon, choosing the most aggressive and hardiest cells to reproduce.

At the Indiana University Melvin and Bren Simon Cancer Center, a group of 50 researchers from multiple disciplines are melding their expertise to combat the disease. They seek to improve detection, develop new therapies, and build a clinical trials program to help drugs reach patients.

The infrastructure is in place for success. The IU School of Medicine, in partnership with the IU Health hospital system, is a national powerhouse in the treatment of pancreatic cancer. It is among the top programs in the country in terms of volume, completing more than 3,000 pancreatic procedures a year. These doctors collaborate closely with laboratory scientists, ensuring all research is designed to benefit patients as quickly as possible.

These physicians and scientists are working at a feverish pace, knowing that patients like Ransel are relying on them to make much-needed breakthroughs.

“We’re getting to a point where almost as many people die from pancreatic cancer as breast cancer,” said Bert O’Neil, MD, who oversees early-stage clinical trials at the IU Simon Cancer Center to assess safety and dosing of drugs to treat cancer. “That’s got to change at some point.”

FINDING CANCER in its infancy would mean patients like Ransel would have the opportunity to undergo surgery to remove diseased parts of the organ, an option ruled out in 85 percent of cases. Too often, the tumor has grown around major arteries and veins, or is too dispersed to adequately treat.

Catching the disease early requires identifying a biomarker—a signature of the disease that physicians can be on the lookout for. Think of high cholesterol and high blood pressure as biomarkers for cardiovascular disease.

A warning sign for pancreatic cancer has been elusive. But the wait may be coming to an end. Murray Korc, MD, has shown that a specific type of microRNA—tiny molecules that help regulate protein expression in the body—is elevated in patients with aggressive pancreatic cancer. “Even though it’s a very small thing, it’s able to orchestrate a response that’s very harmful to patients,” said Korc, who leads pancreatic cancer research at IU.

Just as important, this microRNA drifts along in our circulatory system, meaning it could be detected with a simple blood draw.

Korc and his colleague at IUPUI, Rajesh Sardar, PhD, are engineering a test for that purpose that involves using an ultrasensitive sensor. Another two years may be needed to further refine the test, but Korc insists its ramifications are substantial. “The same thing could be used for any cancer,” said Korc, who holds the Myles Brand Chair in Cancer Research and receives philanthropic support from an endowed fund established to honor the late president of both IU and the NCAA. “This particular assay has ramifications for all human disease.”

BEFORE PANCREATIC cancer emerges, a forerunner may already take root in the organ: cysts. These fluid-filled, abnormal growths, which appear in 3 percent of adults, form tower-like structures in the lining of the pancreas and can evolve into cancer. But not all cysts become malignant. The challenge is figuring out which ones will, and which ones are harmless.

With no good way to know, most patients currently have some or all of their pancreas removed, a risky and potentially life-threatening procedure.

C. Max Schmidt, MD, PhD, runs the Pancreatic Cyst and Cancer Early Detection Center. He wants to determine in advance which patients with cysts are at risk. Recently, his lab identified a critical clue: The presence of growth factor above a specific concentration means that a cyst will remain benign.

And, just as important, the lab developed a test for the growth factor—one that is 99 percent accurate.

The research, which is supported by philanthropy, could help physicians identify patients who require close monitoring and treatment. And it could allow others to avoid dangerous and unnecessary surgeries, and buy them peace of mind. “For me to protect you from a treatment worse than your disease,” he said, “we need a test to assure you that it’s benign.”

What comes next? “It needs to be in clinics,” Dr. Schmidt said.

That’s no easy feat. Start-up costs for labs to run the test aren’t cheap. The volume of tests would be low in the beginning. The logic, though, is that enough data would be generated, analyzed and published to establish the test’s credibility and expand its demand.

OVER THE past year, Ransel has fought her cancer to a draw. From the earliest days, Dr. Safi Shahda, her oncologist, has been pleased with how she’s handled her regimen. In that span, Ransel has carved out a routine. On Tuesdays, her son, Andy, picks her up and takes her to the Simon Cancer Center. They grab lunch from the cafeteria, shop on Amazon.com or watch episodes of House of Cards on her iPad. “I can’t wait for chemo day, because I get to see Andy,” Ransel said.

But for most patients, chemo is only a temporary option.

Pancreatic cancer is devilishly smart. Over time, tumor cells find ways to overcome traditional chemotherapy, meaning treatments that work in the beginning eventually fail. That leaves researchers searching for ways to “resensitize” the disease to chemotherapy.

After nearly two decades of work, Mark R. Kelley, PhD, may have found another tool in the arsenal against pancreatic cancer.

His research focuses on an enzyme called Ref-1. The enzyme plays a role in helping cancer cells survive and grow. Dr. Kelley, who is the Betty and Earl Herr Professor of Pediatric Oncology Research, has shown that a compound—APX3330—prevents the enzyme from initiating a sequence of events and disrupts its work.

The drug appears to work alone and could potentially be used in combination with chemotherapy drugs. There’s also another added benefit: APX3330 appears to have low toxic side effects, according to early studies. The results of laboratory research have been positive enough that, in partnership with a startup biotech company founded by Kelley, plans are moving forward for a Phase I clinical trial to test the safety of the treatment in patients.

RANSEL’S LIFE is plotted out on a legal-sized piece of paper she keeps folded and creased in her purse. The calendar is filled with color-coded blocks that show a life still in motion. This fall, she trekked to North Carolina and a cabin nestled in the Smoky Mountains for a retreat with other cancer survivors. Ransel also jetted to the West Coast and Newport Beach, California, to visit her son, Scott, who will get married this coming May.

She hasn’t relinquished her career in the process, either. Ransel still works as a marketing specialist at Spohn Associates. Her bosses allow her to work a rotating schedule: One week receiving chemotherapy, and then another week back at the office.

Over the past four years, she’s also volunteered at 24 Hours of Booty, a round-the-clock bike ride in which cyclists tick off laps on a 3.5-mile loop to raise money for cancer research. Since the event started in Indianapolis, Ransel has volunteered at the Booty Store, greeting riders with warm smiles and chatting about how they overcame their illness, the struggle of their loved ones still grappling with cancer, or how they ride in memory of those lost.

Now, Ransel is a beneficiary of the ride’s efforts, with a portion of proceeds going to support research at the IU Simon Cancer Center. “It’s just funny how life’s path takes you,” she said.

Ransel admits she never has been a worrier. And even after being told the grim statistics associated with pancreatic cancer, she felt events would ultimately turn out fine. “I never even cried,” she said.

And it’s why she tells her son, Scott, he can expect to see her as he strides down the aisle in a few months.

“I keep telling him I’m not just in this for quality of life,” she said. “I’m in this fight to beat it.”

To learn how you can support pancreatic cancer research, contact Mary Maxwell at mmaxwell@iu.edu or 317.278.2130.