Michael Econs helped find a treatment for one rare genetic condition. Now, he’s turned his attention to another: osteopetrosis. 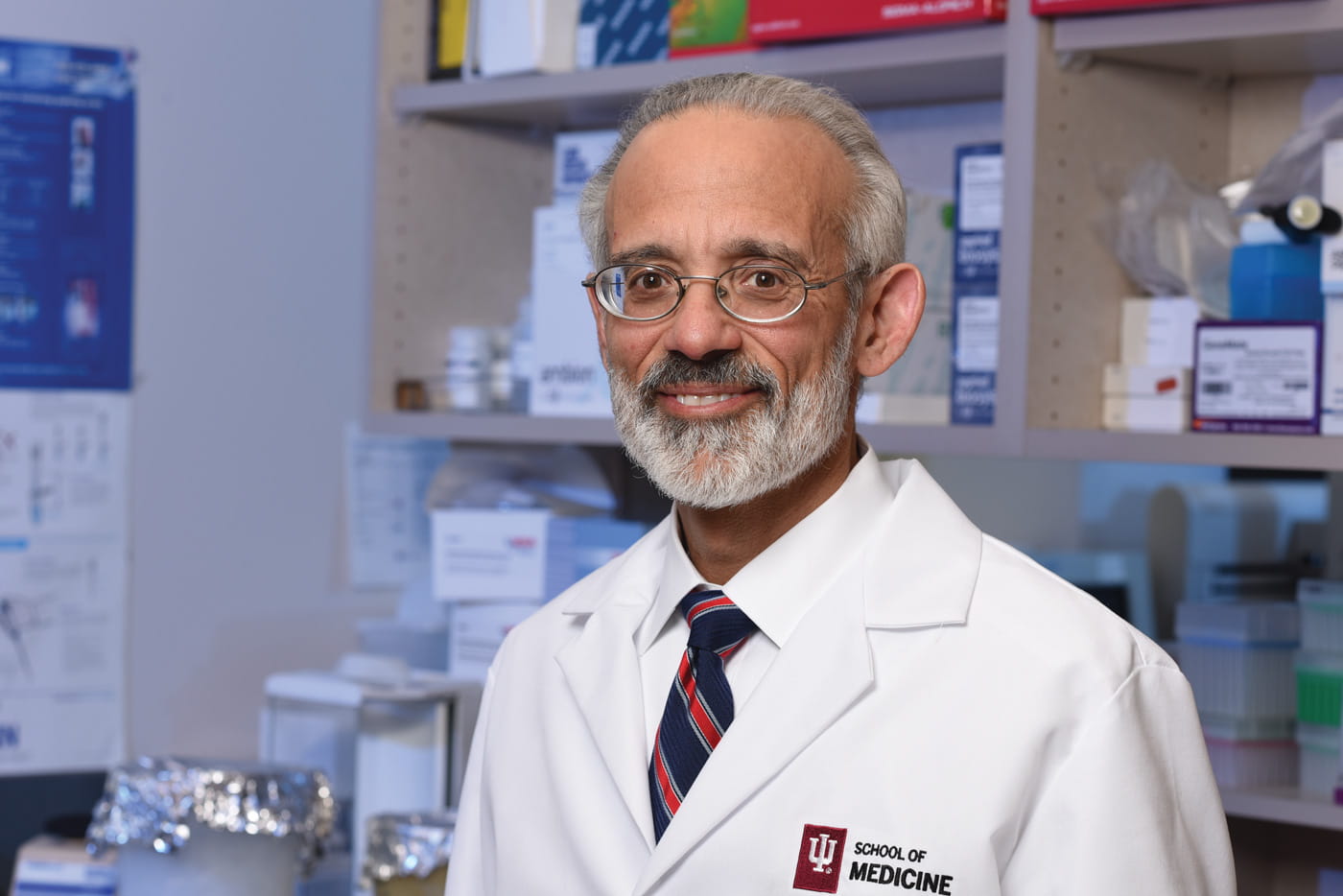 Michael Econs, MD, runs just one of three labs in the world looking to find a treatment for marble bone disease, a rare form of osteopetrosis.

BILL WILLIAMS JUST wanted to out-do the other boys.

He was 12. It was gym class. He and his classmates were taking turns to see who could throw a softball the farthest. On his second try, Williams put something extra into it. With everything he could muster, he launched the ball into the air.

Then he—and every other kid on the playground—heard a sickening crack.

Williams felt excruciating pain and grabbed his right arm. “Because I was at school—and there were other children around—it seemed more alarming than it might have,” Williams recalls.

An X-ray in a hospital emergency room showed he had a broken humerus—but also something else. His bones looked strange. A few days later, he saw a specialist, who discerned the nature of the problem. Williams’ bones were extraordinarily dense—and yet fragile—because of a rare, genetic disease called osteopetrosis. The condition’s other name is more descriptive—marble bone disease.

Decades removed from that Tennessee playground, Williams, now 55, still struggles with the disease that only three labs in the world are studying. The one leading the charge—the one that gives Williams hope for a treatment— is run by Michael Econs, MD at Indiana University School of Medicine and the Glenn W. Irwin, Jr. Professor of Endocrnology and Metabolism.

HOW RARE IS osteopetrosis?

Estimates are that it affects only about 17,000 people in the United States. By comparison, cancer kills 35 times that many people every year.

In the family of bone diseases, it’s exponentially less common than the more familiar osteoporosis, which is estimated to afflict more than 53 million Americans—half of the adults over 50.

Two decades ago, Econs’ team published a paper documenting 96 people with the genetic mutations that cause osteopetrosis. More recently, they’ve begun an in-depth natural history in osteopetrosis. So far, the team has been able to do detailed studies on 36 osteopetrosis patients, including several tests that cannot be performed at many other institutions.

In his travels to patient gatherings, Williams says he’s met no more than 20 people with the disease. “Meeting two or three is meaningful,” he said. “It’s someone else to connect with and share experiences.”

For Econs, an accomplished scientist with an entire lab staff at his side, an obvious question then is why does he spend time and brainpower on a disease that affects so few? The question isn’t new to Econs—and he has ready answers for it.

Research into rare diseases often leads to breakthroughs in other, more common ones. Lessons learned from osteopetrosis could offer insights into osteoporosis, for instance. More than that, though, it comes down to patients like Bill Williams, who are living with the disease and looking for answers.

That was the case with another uncommon, painful and debilitating bone disease, X-linked hypophosphatemia, or XLH. Econs was part of the team that developed an FDA-approved drug to treat the disease.

ECONS IS QUITE versed in describing the unusual mechanisms of osteopetrosis.

Human bone, he says, is constantly tearing itself down and rebuilding—a useful method of self-repair for a skeletal framework that must last a lifetime. Some bone cells, called osteoclasts, dig tunnels through bone. Others, called osteoblasts, lay down new bone.

With osteopetrosis, Econs said, the cells that carve out the tunnels don’t work. As new bone is laid down by the osteoblasts, the bone gets very dense and very hard—like marble. Hard enough that bone marrow biopsy needles break and surgical drill bits that normally last for 100 procedures on other patients are worn down after a single encounter with marble bone.

While marble is hard, if you drop it on a cement floor, it shatters. Healthy bone, Econs said, is more like wood—softer, yet more resilient.

The severity of osteopetrosis can vary significantly between patients. Some live mostly normal lives. Others suffer dozens of bone fractures. Children with the disease can lose their vision as bone in the optic canal grows and squeezes off the optic nerve. Some patients suffer from chronic jaw and mouth infections. Because bone marrow gets compacted, it can shut down the body’s ability to make blood components—making them transfusion-dependent. They can also be more prone to infection.

For Williams, the childhood diagnosis came with the admonition to avoid sports, which wasn’t easy for him. As a young adult, he struggled with back pain. More recently, he has suffered two leg fractures, leaving him with a limp. While he has related dental problems, the risk of infection has made work on his mouth risky.

IU researchers are learning more about the disease from the patients. They’re doing imaging work to better understand what’s happening in the bone. They’re developing metrics that will be used to measure the effectiveness of treatments to come. And there are two drugs showing promise in cell cultures—drugs that will soon be ready for animal testing. In the next five to 10 years, Econs estimates, there will be better options for patients.

Williams is counting on it.

“I put my trust in researchers, in the clinicians, in doing the work they do so well,” he said. “I am praying for the day when Dr. Econs calls me and says, ‘We’ve got it. We’ve found the answer, we’ve found the cure for osteopetrosis.’”

To help Michael Econs, PhD, and his lab advance research for marble bone disease, contact Kathryn Red at kred@iu.edu or 317-274-3585.