IU School of Medicine has risen to the occasion before in a time of uncertainty. Its faculty ran an army hospital and saw combat's grim toll up close during World War II. 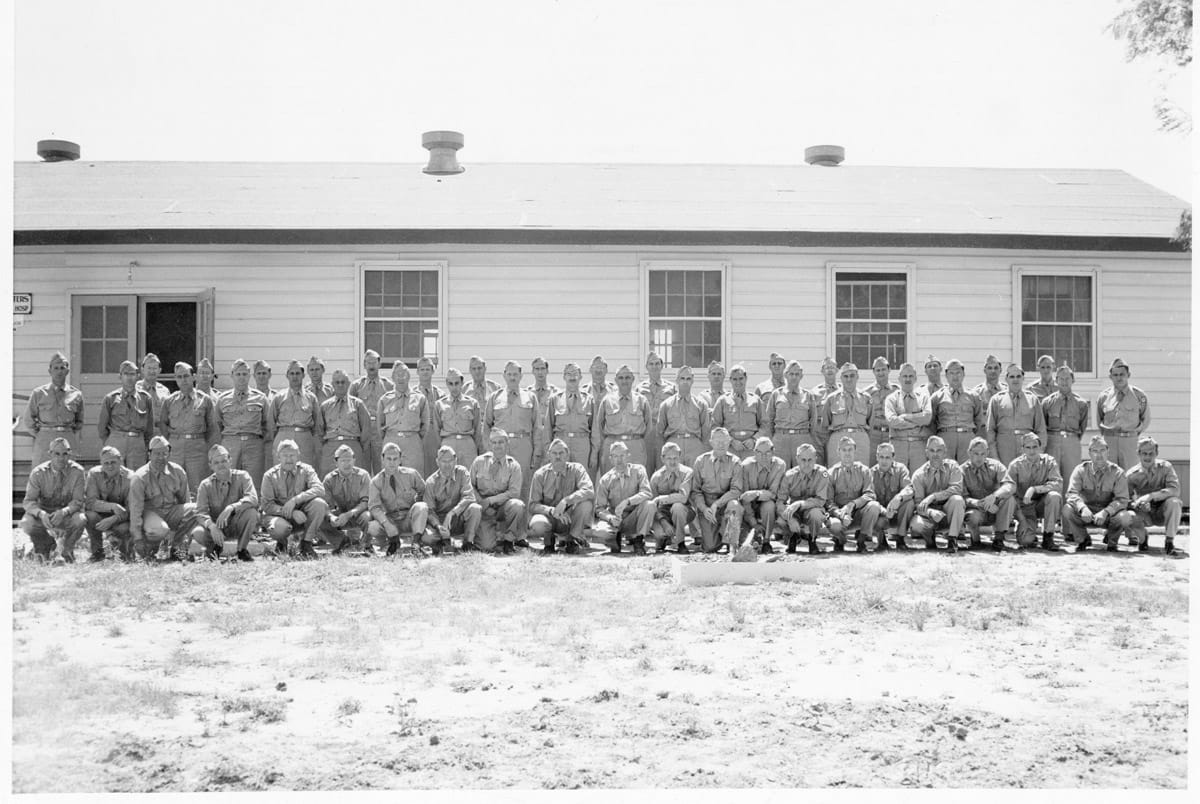 If Thompson paid close enough attention, he could hear an eerie warning: the faint swishing sound of a German V-1 rocket tracing a deadly arc toward Liege. The physicians, nurses and enlisted men of his 32nd General Hospital knew the sound all too well. One rocket strike had destroyed two houses that were quartering troops. Another rocket strike injured nearly 30 enlisted men and three officers.

Until then, the medical unit—organized and led by IU School of Medicine faculty—had operated at a reasonably safe distance from the fighting. But, as they prepared for their last posting of World War II, they sat well within range of German strafing.

The rockets, Thompson would write in a letter to his wife, “were like an object of curiosity. Once one has seen the full extent of the explosion and felt the blast, it is only that noise of the dive which is chilling.”

The contributions of IU School of Medicine to the American efforts in World War II, which ended 75 years ago, were made not only by the doctor-soldiers nearest the front but also by those trying to carry on at home.

To address the acute shortage of physicians—both in the military and at home—the school began enrolling two sets of first-year medical students in late 1942 and continued to do so for the duration of the war. To manage it, the school moved to a year-round teaching schedule.

It was a Herculean task given that, by the end of the war, 80 IU School of Medicine professors had enlisted, while most of the remaining faculty were over 50, taught part-time and still ran their private practices.

For those who served with the 32nd General Hospital, glimpses of daily life are as fleeting as the contrail of a German rocket. Pieces of it remain in military records, photos, and transcribed letters stored at IUPUI’s Ruth Lilly Special Collections and Archives. The characters who animate the story are obscured somewhat by the clerical language and matter-of-fact style of military reports. Hints of the drama still peek through.

The 32nd General Hospital, organized by Thompson and Cyrus J. Clark, MD, was inducted into the armed forces in May 1942. A lag in their deployment and their basic training meant they didn’t ship out for Europe until August 1943. For wounded soldiers evacuated from the battlefield, the 32nd General Hospital unit was often the last stop before heading home. Unlike small, mobile field hospitals, the unit was based at camps with hundreds of beds and included personnel who performed specialized surgeries.

The unit passed its first nine months in England at a rolling, 2,500-acre estate known as Fairford Park that, starting in October 1943, was home to a 1,000-bed facility. Typically, its patients were Air Force pilots injured during bombing runs to knock out Germany’s war industry.

About a month after the Allied invasion of France in June 1944, the 32nd General Hospital unit followed and set up a tent hospital outside La Haye-du-Puits. There, surgeons saw the toll inflicted by artillery fire—shrapnel wounds, mangled limbs.

The 32nd moved out of France in November 1944, stopping in Belgium, where the airstrikes jarred them. A month later, December 1944, the Germans made a final desperate push­—the Battle of the Bulge— and the fighting came within 30 miles of Liege before the Allies turned back the attack.

The unit’s final stop was in Aachen, a bombed-out city just inside the German border. Before they could open a 1,200-bed hospital, they had to swiftly renovate the wrecked building that would house it. The building’s windows were blown out, allowing snowdrifts to build up in the halls. Debris sat piled in almost every room.

It wasn’t until March 1945 that the 32nd opened a functional facility. And demand was high, with nearly 1,000 patients streaming in over the first three weeks of operations.

Official reports tally the number of patients served by the 32nd General Hospital unit as 5,350 in England and 41,795 in Germany.

The stories that unfolded in those operating rooms—and the toll it took on the troops—remain with the doctors who performed the work, many of whom are now gone.

While in the Army, Thompson mailed 380 letters home to his wife. But, as was common for many of those who served during World War II, he rarely delved deeply into his work or how it affected him.

One line of concise description, pecked out on a typewriter in an annual report for 1945, offers a glimpse: “Twenty-four hours a day, without let up,” it reads, “the casualties streamed in.”