Stephanie Pemberton saw the impact cancer research had for others—and experienced it herself after she was diagnosed with breast cancer. 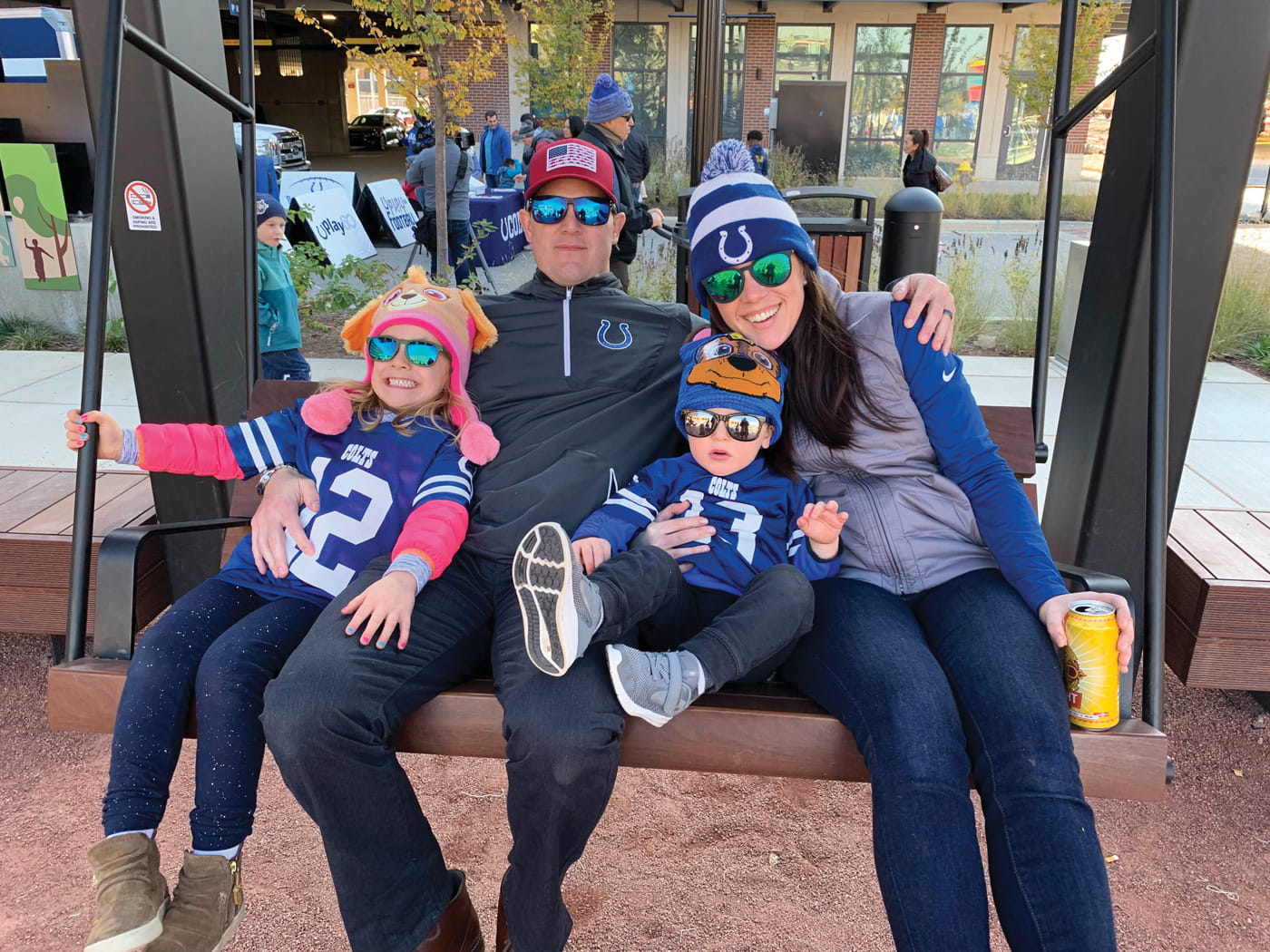 Stephanie Pemberton was diagnosed with breast cancer in February 2020 and underwent treatment involving 16 weeks of chemotherapy and a double mastectomy.

STEPHANIE PEMBERTON WAS no stranger to the Indiana University Melvin and Bren Simon Comprehensive Cancer Center.

Working in community relations for the Indianapolis Colts, she had arranged for players, cheerleaders, and even the Colts’ mascot, Blue, to visit so they could offer encouragement to cancer patients. Pemberton had gone along for the visits.

She had gained additional perspective on cancer and the IU Simon Comprehensive Cancer Center through the team’s support of its cancer-stricken coach, Chuck Pagano, and the Colts’ Chuckstrong initiative, which this year approached the milestone of raising $10 million for cancer research at IU School of Medicine.

Yet, even as she walked the halls of the chemo infusion center and met cancer survivors, the disease remained remote. “It was always something I worked on from a work perspective,” she said, “but it was not something I ever thought, ‘What if I get breast cancer?’”

That changed in February 2020 when Pemberton, a 36-year-old wife and mother of two little ones, and seemingly the picture of health, was confronted with a new reality: a lump she’d found on her breast that was soon diagnosed as triple negative breast cancer.

“To say it was a surprise is probably an understatement,” Pemberton said.

After a heartbreaking call to her husband, Keith, and an emotional conversation with her parents, Pemberton’s next call was a no-brainer: a contact at the IU Simon Comprehensive Cancer Center she knew from Chuckstrong events. “I knew I didn’t want to be anywhere else,” she said. “I knew what we were dealing with was, literally, a life and death matter.”

Pemberton soon met Bryan Schneider, MD, the Vera Bradley Professor of Oncology at IU and a leading expert in the treatment of triple negative breast cancer, one of the most aggressive types of the disease. Additional genetic testing—aimed at better understanding her disease—revealed a new surprise: Stephanie had a mutation in a gene, BRCA 1, that put her at greater risk for breast and ovarian cancer.

“This mutation now threw a wrench into things because not only are we dealing with the tumor at hand, but we are also dealing with what’s going to happen down the road,” Schneider said.

Pemberton underwent 16 grueling weeks of chemotherapy to shrink the tumor, but she also made the difficult decision for her long-term health to undergo a double mastectomy and a hysterectomy. Those proved to be good decisions. Follow-up testing has revealed that, more than a year later, she shows no evidence of cancer.

It’s a dramatic turn from her lowest moments following her diagnosis, when Pemberton feared she might not live to see her small children, ages 5 and 3, grow up, graduate college, and have families of their own.

“Because of research and because of amazing doctors and because of the IU Simon Cancer Center and because of God’s plan for my life I know I’m going to be there for all of those moments,” Pemberton said. “You just can never put into words what that means.”

The genetic discovery had implications for her family as well. Subsequent testing revealed that her mother and three of her four sisters also had the BRCA 1 mutation, leading them to make dramatic decisions for their own health. In the future, Pemberton’s daughter may face similar choices. But she hopes advances in science will make those choices easier.

“Research truly does save lives. And the more that we can know about the different kinds of cancers and treatments, the more hope there is for our children and our children’s children,” Pemberton said. “I think one of the challenges is that, sometimes, research takes time, and it’s not always immediate. When we’re giving and we’re donating, we’re not just donating for the here and now. We’re donating for the future, and for future generations.”