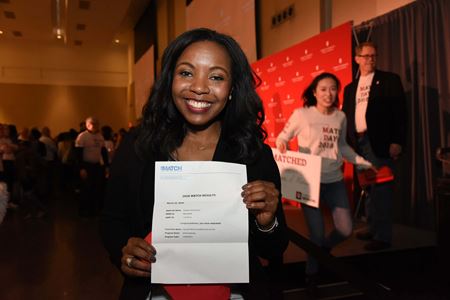 Ciersten Burks, MD, holds her letter on Match Day in 2018. Burks is in her first year of residency at Harvard.

For fourth-year medical students at Indiana University School of Medicine, the specter of Match Day looms large on the horizon. All are waiting to break open the seal on that fateful envelope—an otherwise unassuming package that contains their futures in medicine.

Just one year ago, Ciersten Burks, MD, was bracing for the same momentous occasion. An Indianapolis native, Burks’ time at IU School of Medicine included a year-long research fellowship with Marion Couch, MD, PhD, in the Department of Otolaryngology. In a room full of her peers, and surrounded by members of her family, Burks opened up her envelope on Match Day and burst into joyful tears—she was headed for Harvard Medical School.

Now in her first year of her otolaryngology residency, Burks took a moment to look back on her Match Day experience, and lend some useful advice to students gearing up for the big day.

How has the transition been moving from Indy to Boston?

I love the city, but it was an adjustment to begin with. I grew up in Indianapolis, went to undergrad in Bloomington, and then of course medical school in Indy, so I’m a Hoosier through-and-through. This was my first time really leaving home, but honestly it hasn’t been as tough as I thought it might be. I think it really helps having co-residents who I’m really close to. And, I’m only a two-hour plane ride away.

How has the shift from a medical student to a resident been?

It’s been such a great experience. My co-residents are phenomenal, and I’ve learned a lot from them already.

Going from medical school to residency is certainly a shift. To truly take on the role of a surgeon and all of the responsibility that includes—an increased patient volume, learning a new hospital system, often being the first one to respond when things begin to go wrong for patients, since as interns we spend a great deal of time on the floor—there is a steep learning curve. However, when I look back on where I started, at some point along the road I realized that I became more comfortable in my role.

As a resident intern in your first of five years of residency, can you describe what you’ve been learning since moving to Boston?

Our intern year consists of six months of otolaryngology and six months of off-service rotations. Our off-service rotations are tailored in a way so that we can learn specific knowledge/techniques from specialties that will be applicable to ENT. Therefore I’ve done a couple of months of general surgery, one month of neurosurgery, a month of plastic surgery, a month in the cardiothoracic ICU and finally a month on the oral maxillofacial surgery service. It’s been a great year all around.

Not so long ago, you were a fourth-year medical student, and facing the stress of Match Day. What was going through your head as you waited for that big moment?

Well, there were a lot of nerves. It’s such a big decision, and you’ve been gearing up for it all through med school, and definitely for all fourth year. It all leads up to knowing where you’re going to complete your residency. In addition to the nerves though, there’s also a sense of relief—you’ve done all the work, you’ve done all you can do, and now it’s time to find out where your next step will be.

On Match Day, it all comes down to what’s inside the envelope. Can you talk about how you were feeling in the moments leading up to the reveal?

There was so much excitement. I was surrounded by my entire family, and they had been with me through the whole process so it felt almost as much their moment as mine. You’re surrounded by all of your friends, and everyone is so ready to find out where they’ll be. It’s just a big celebration.

And then you opened your envelope and saw one word: Harvard. What was that moment like?

I was elated! It was certainly high on my list of where I wanted to complete my residency—I was just so thrilled for what was to come.

Looking back at your experience, what advice do you have for fourth-year medical students before and after Match Day?

Now this is certainly easier said than done, but before Match Day I would just tell them to relax as much as they can. Take it all in and enjoy the time with their classmates—it’s the last couple of months that they are all going to have together as a class before they spread out around the country.

They should celebrate their accomplishments—they’ve made it through the interview process, which is fun, but also pretty grueling and tiring. They should enjoy the fact that they’ve come to the end of it, and they will shortly have a huge moment with their classmates, friends and family.

After they open that envelope, there will likely be a mixture of emotions. I advise everyone to keep an open mind. Wherever you match, there is a reason for it and you will grow so much over the journey that will shortly begin.

For everyone in that room, it’s time to celebrate the moment, because you’ve made it through and on to the next step!

Match Day is Friday, March 15. Follow us on Facebook for a live stream of the event, starting at 11:30 am EST, and share your photos and experiences using the hashtags #MatchDay and #IUSM2019.