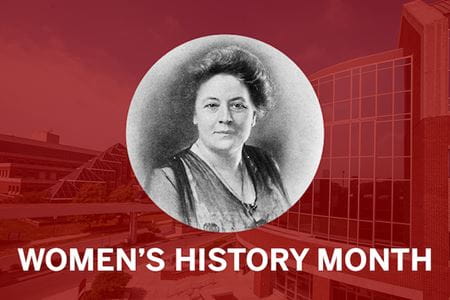 One hundred years after women gained the right to vote in the United States, Indianapolis physician and women’s suffrage leader Amelia Keller, MD, is being honored for her role in advocating for the rights of women and her contributions as the first female faculty member at Indiana University School of Medicine. A historical marker honoring Keller’s legacy will be installed at the Ruth Lilly Medical Library on the IUPUI campus by the Indiana Historical Bureau, with financial support from the Indiana Women's Suffrage Centennial Commission and IU School of Medicine. A dedication ceremony will be held on April 19 from 1:30-3 pm at Hine Hall.

“IU School of Medicine has a long legacy of advocating for the advancement of women. I am immensely pleased that we will have a permanent marker installed to commemorate Dr. Keller, who was steadfast in her pursuit of equal rights for women,” said Mary Dankoski, PhD, executive associate dean for Faculty Affairs, Professional Development and Diversity. “I hope the marker inspires us all to be unwavering in our efforts to advance equity and inclusion for persons of all backgrounds.”

Keller graduated from the Central College of Physicians and Surgeons in Indianapolis in 1893, opened her own general practice specializing in pediatrics in 1895, and joined the Central College faculty in 1906. When the college merged with IU School of Medicine in 1908, Keller continued as an associate professor of diseases of children, serving on the medical school’s faculty until 1919—one year before women gained the right to vote. 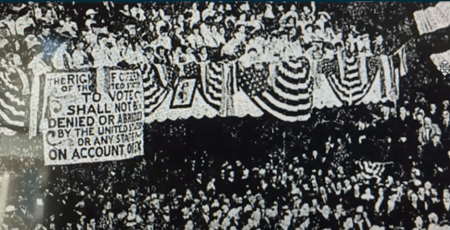 During her time at IU School of Medicine, Keller was a vocal advocate for women’s rights, not only the right to vote but also the rights of women to have a voice on governmental boards. She served as president of the Indianapolis Equal Suffrage Society and founded the Women’s School League, leading a successful campaign to elect the first woman to a political office in Indiana: Mary E. Nicholson to the Indianapolis Board of School Commissioners in 1910.

Under Keller’s leadership as president, the league expanded its mission and broadened its reach. Renamed the Women’s Franchise League, it spread to 100 branches across the state of Indiana and became affiliated with the National Equal Women’s Suffrage Association. Keller was active in Indiana politics until her death in 1943.

The initiative to honor her legacy began with an Honors College project by IUPUI student Ian Harmon, who is majoring in history and museum studies. He decided to research Keller as the subject of a biography project for his Indiana History course taught by IUPUI Senior Lecturer Anita Morgan, PhD, who recently released a book on the women’s suffrage movement in Indiana and gave the keynote address for Indiana University’s Equality Day commemorating the 100th anniversary of the 19th amendment.

Keller was one of the leading voices for women’s suffrage in the state. She and another female physician, Indianapolis surgeon Hannah Graham, worked independently toward women’s suffrage and, controversially at the time, allied with Black women’s suffrage clubs for the cause. Keller was particularly noteworthy for her political savvy.

“Dr. Keller’s considerable skills were on display when she lobbied and worked within the political system,” Morgan said. “She distributed suffrage literature at the polls, talked to men at local political meetings, easily talked with legislators in halls of the statehouse and was very comfortable working within the established political system.”

For someone wielding such tremendous influence, there has been surprisingly little written on Keller, noted Harmon. In applying for the historical marker, Harmon was required to document credible sources of information about Keller and identify the main points to be displayed on the marker. He spent hours digging through newspaper archives and meeting minutes to learn more about her contributions.

“You can tell, by how she’s referred to, that she was a well-known and respected physician,” Harmon said, noting Keller was the personal physician of Indiana Gov. James P. Goodrich and his family.

“There was a party for a state official at Dr. Keller’s home. The governor was leaving the event, and his car got hit by a streetcar, flipped over, and he was pinned under it,” Harmon related. “Dr. Keller was the medical professional on the scene who was able to give him the medical help he needed to get him stable before being transferred to the hospital.”

Another newspaper article featured a prominent photo of Keller as the first woman to cast her ballot in a 1912 “women’s primary” conducted by The Indianapolis Star, inviting women to submit mock ballots eight years before they would gain the legal right to vote.

Harmon said he is “flabbergasted” his project has led to a historical marker being placed on the IUPUI campus.

“It means a lot to know it’s something permanent to honor Dr. Keller and ensure she’s remembered,” Harmon said. “Hopefully, it will cause others to do some research and want to learn more about her.” 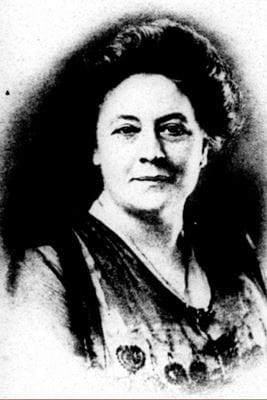