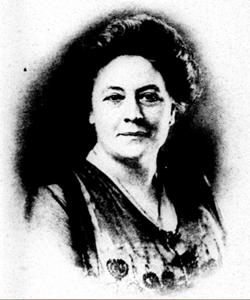 Of particular note is her significant work in women’s suffrage. It may be hard for us to envision now the position of women at this time in our history. We should all thank Dr. Keller when we go to vote in the 2020 elections, which will be the 100 year anniversary of the passage of the 19th amendment granting women in the United States the right to vote. Other well-known leaders of the suffrage movement in Indiana during this era were Zerelda G. Wallace, May Wright Sewall, Helen M. Gougar, Ida Husted Harper, Marie Stuart Edwards, and Grace Julian Clarke.

As President of the Indianapolis Equal Suffrage Society in 1909, Dr. Keller sought to invigorate other women and demonstrate the potential of women as political leaders. She formed the Women’s School League and led a successful campaign to elect Mary E. Nicholson, the first woman in Indiana to be elected to political office, in this case, to the Indianapolis Board of School Commissioners in 1910. By replacing the “School” in its name with “Franchise,” the Women’s Franchise League could expand its efforts to give women the chance to vote in other types of elections beyond school boards. Dr. Keller served as its first president and was renominated into that role each year from 1911 – 1917. The League grew across the state to 100 branches and became affiliated with the National Equal Women’s Suffrage Association. Dr. Keller also was the editor of the suffrage department column in the Citizen, a monthly magazine published by the Citizen’s League of Indiana.

As a prominent civic leader, Dr. Keller served as the first vice-president of the Indiana Federation of Clubs from 1914-16 and then went on to chair its legislative committee. She was a member and President of the Local Council of Women, a charter member of the Rotary Club in Indianapolis and President of the Women’s Rotary Club. Influential leaders of the day, including women’s suffrage leaders, civic organization representatives and well known social reformers, like Jane Addams, and Indiana Governor James P. Goodrich, for whom she was his family’s physician, gathered at her home. She was active in Indiana politics until her death in 1943 and was buried in Crown Hill Cemetery in Indianapolis.

Dr. Keller’s footprints walked everywhere that she could to generate positive change for women and society. The dedication of her time, talents and interests to service and leadership are an inspiration to future generations of physicians.