Gutmann's path to leadership in neurology inspired by her father, encouraged by women colleagues 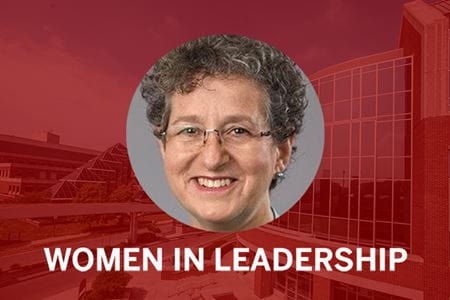 Laurie Gutmann, MD’s first trip to Indianapolis wasn’t for a neurology conference, as might be supposed. When she visited in 2002, Indiana University School of Medicine’s future Department of Neurology chair didn’t have career networking in mind. This trip was all about “Star Wars.”

Gutmann was bringing her young son to experience the Star Wars Celebration at the Indiana Convention Center in downtown Indianapolis. Those who spend much time with Gutmann quickly learn she is a “total Star Wars geek.”

Gutmann’s office décor includes a Yoda figurine and a framed poster of Star Wars characters with photoshopped faces—a personalized gift from her colleagues at the University of Iowa when she departed for IU School of Medicine in the fall of 2020. Gutmann is cast as main character Luke Skywalker. However, she prefers to see herself as Skywalker’s mentor, Jedi Master Obi-Wan Kenobi. 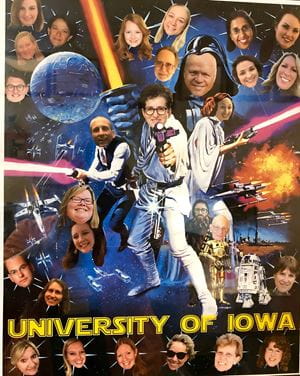 On the poster as the face of C3PO is Gutmann’s father, Ludwig “Lud” Gutmann, MD, her ultimate real-life mentor and her colleague in neurology for 27 years. A former chair of neurology at West Virginia University, he remains on faculty at University of Iowa’s Carver College of Medicine—at the age of 88.

Laurie Gutmann sees her dad, whose parents fled Nazi Germany in 1937, like Yoda, one of the most renowned Jedi masters in galactic history, known for his legendary wisdom. Her father’s motto matches Yoda’s famed adage: “Do. Or do not. There is no try.” In addition to teaching, he still sees patients. His lifetime research has focused on diseases of muscles and nerves, and he has published more than 170 articles in peer-reviewed journals.

So, naturally, Gutmann wanted to follow in her dad’s footsteps, right? Well, not exactly.

“I actually said I never wanted to be a neurologist because my dad worked so hard. He took journals with him on vacation, and evenings were filled with work,” Gutmann recalled.

She shared her dad’s love of science but initially thought she would be a biologist.

“I got really interested in invertebrates—the squid axon is the coolest thing you’ve ever seen!” she still marvels.

Growing up in the college town of Morgantown, West Virginia, Gutmann had other interests, too. She liked drama and art, and even apprenticed one summer for a silversmith. But her main passion was running, another interest she shares with her father.

“I ran cross country back before there were many women’s teams. I used Title Nine and joined the boys’ cross country team, much to the chagrin of the coach,” Gutmann said. “Running is still my form of meditation and relaxation.”

Being the only girl on the team was good training for her future career. During her neurology residency at University of Virginia, Gutmann was one of just two women in her residency year. She found a similar circumstance when she joined the neurology department at West Virginia University, which had one other woman who left within Gutmann’s first year.

“There were very few women in the whole School of Medicine outside the Department of Pediatrics. I knew almost all the women on faculty at West Virginia because there were so few of us when I first started,” she said.

An additional obstacle to her initial acceptance from colleagues: she was the chair’s daughter. To Gutmann, that was the greater challenge.

“There was this concern about favoritism from some faculty who wondered if I was really qualified, but it didn’t take long to become accepted,” Gutmann said. “I’m a team player.”

Following in her father’s footsteps

Gutmann is the middle child of three, and her older sister sometimes refers to her as the “ultimate brownnoser.” She was the only one who shared her dad’s love of running, the only child to become a doctor, and she worked with her father for 27 years. 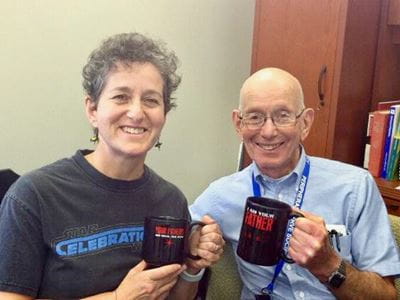 However, after getting her undergraduate degree in biology from Oberlin College in Ohio, her career path was less than certain. She took a year off, working in a research lab and volunteering with Emergency Medical Services (EMS).

“One night in the ER, I was helping stitch someone up, and the ER doc said, ‘Why don’t you go to medical school?’” Gutmann recalled.

She ended up at West Virginia University School of Medicine, where tuition was low for in-state students. But she shied away from her father’s department, choosing to do her neurology rotation away at the University of Virginia.

Despite her resistance, Gutmann ultimately fell in love with neurology and returned to Virginia for her residency training and a fellowship in neuromuscular diseases and electromyography.

“For me, it’s the puzzle of trying to figure out from the patient’s story and their exam where the problem is and what it is,” she explained. “I really like interacting with people. It’s my favorite thing. In neurology, you often end up taking care of people for a long time, so they become like part of your extended family.”

This time, her father followed her, joining the Iowa faculty as clinical professor of neurology at age 80.

Gutmann got interested in clinical research early in her career, seizing opportunities to work with the National Institute on Neurological Disorders and Stroke (NINDS) to build new, multidisciplinary programs in stroke and myotonic dystrophy. While at the University of Iowa, she helped found and direct the Neurology Office of Clinical Trials, was co-principal investigator on an NINDS grant for early clinical trials in rare neurological disorders known as NeuroNEXT, and helped develop the NINDS-funded Clinical Trials Methodology Course, which trains up to 30 new clinical trial investigators annually.

When Gutmann arrived at IU School of Medicine in October 2020, it was the first time she was not alone as a woman leader in neurosciences. IU School of Medicine is unique in having four women department chairs: Gutmann in neurology; Shelly Timmons, MD, PhD, in neurological surgery; Tatiana Foroud, PhD, in medical and molecular genetics; and Flora Hammond, MD, in physical medicine and rehabilitation—all four working in the neurosciences. “I can’t think of any other school that has that number of women leaders in neurosciences,” Lamb said. “And this is to the credit of Dean Hess and the School of Medicine.”

In Iowa, Gutmann found more women in the neurology department than at her previous institutions; however, few women were in positions of leadership. When she came to Indianapolis to interview for the chair position at IU School of Medicine, things were different.

“After my first interview, I had dinner with Flora and Shelly, and that was refreshing,” Gutmann said. “It is very fun to see other women in leadership in the neurosciences.”

Since coming to IU School of Medicine, Gutmann has proved to be an insightful collaborator, Timmons said.

“Her experience with clinical research and as a national leader in various neurology, education and research bodies give her a broad perspective on the neurosciences that has contributed a great deal to our institute strategy development and departmental collaborations,” Timmons said.

Gutmann is a member of the American Academy of Neurology’s Women in Academic Leadership Work Group, where she has helped develop women leaders in her field.

Along her professional journey, women mentors and colleagues have been invaluable. One such mentor is Allison Brashear, MD, MBA, former chair of neurology at Wake Forest and current dean at University of California-Davis School of Medicine.

“At one point, I was mentoring her as I was a leader in a professional organization, and now she’s mentoring me as a dean at another institution,” Gutmann said. “Women support and mentoring networks have been very important to me.”

Once when they were in the same board meeting, Gutmann recalls presenting an idea that was dismissed. Later in the meeting, a male colleague made the same suggestion, and it was embraced by the group.

“Allison said, ‘It is a great idea, as Laurie said when she first introduced it.’ That was a wonderful tactic to reinforce and support each other in a way that was not confrontational,” Gutmann said. “Making sure people get recognized for the work they do and their ideas is important. Whether or not it’s implicit bias, if you never recognize the person who had the idea, it can be discouraging. And I think it happens more to women because they often don’t stand up and say, ‘That was my idea!’”

Another longtime colleague-mentor is Robin Conwit, MD, program director in the Division of Clinical Research with National Institutes of Health/NINDS. Her career has intersected with Gutmann’s at several points beginning as junior faculty members in the early 1990s.

“An example of when Laurie mentored me early on: she encouraged me to be a Neurology Board Examiner, a superb experience of giving oral board examinations to new neurologists. In turn, I mentored Laurie at a point when we were more experienced neurology clinical researchers so that she was able to spend time with us at NIH/NINDS for four years, part-time, in order to capitalize on Laurie’s talents and experience and to enhance exposure to clinical trials and clinical research,” Conwit said.

“I always say that Laurie made me and others do even more because of the example she sets by her own fine work. She tackles difficult questions and can work equally well with all types of colleagues and patients,” Conwit added. 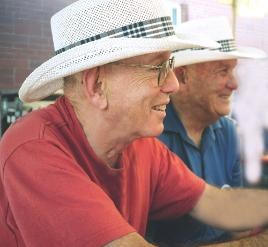 Undoubtedly, Gutmann developed much of her work ethic from her first mentor: her dad.

When asked if she’ll still be working in neurology at age 88, Gutmann chuckled and said, “I’m going to say ‘no’…but you never know.”

“The key thing is it’s still a lot of fun,” she said. “I just saw a case this morning that is extremely puzzling, and that’s part of the fun. I’m trying to find an answer for people and learning more all the time—things are always changing with new treatments, discoveries and our growing knowledge of genetics.”