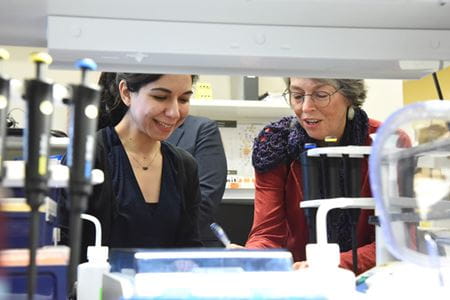 When Hande Karahan, PhD, was growing up in her home country of Turkey, she often saw people—including members of her family—suffering from Alzheimer’s disease.

She saw not only those diagnosed with the disease in pain, but their caregivers, too.

“It’s really hard to see how bad Alzheimer’s affects your loved ones,” Karahan said, “but you’re not able to do anything.”

Nearly 50 million people worldwide, including about 5.8 million in the United States, are estimated to have Alzheimer’s disease or related dementia, according to the World Health Organization. In the U.S., that’s expected to rise to about 14 million people by 2050.

And those caring for the millions of Americans living with the disease spent an estimated 18.5 billion hours helping their loved ones in 2019, according to the Alzheimer’s Association.

Karahan, a postdoctoral research fellow at Indiana University School of Medicine, has spent more than a year researching the functions of a gene associated with the disease. The investigation—supported by a fellowship created by a family of caregivers and named after an advocate of scientific research—has been a “turning point” in her career, she said.

In 2019, Karahan received the Sarah Roush Memorial Fellowship in Alzheimer’s Disease Research, established by the Indiana Alzheimer Disease Center. It’s funded through a generous donation from James and Nancy Carpenter and a matching contribution from Stark Neurosciences Research Institute, where Karahan conducts her research.

Recently, Karahan presented her findings to the Carpenters as well as Tom and Dianne Trauring, also contributors to the fellowship. Dianne Trauring and Nancy Carpenter are the daughters of Sarah Roush, who died of Alzheimer’s disease in 2010. 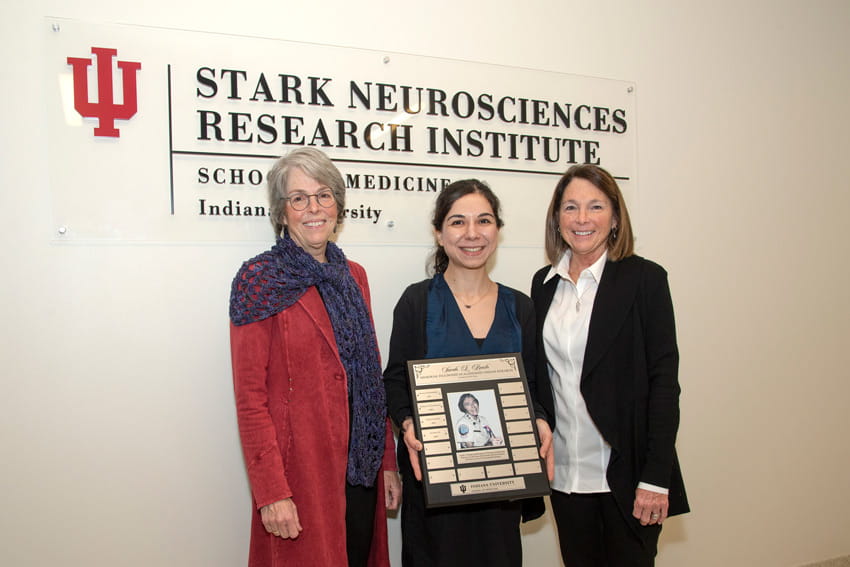 Since 2017, four IU School of Medicine postdoctoral students—Shweta Puntambekar, PhD, in 2017; Kathryn MacPherson, PhD, in 2018; Hande Karahan in 2019; and Meichen Yu, PhD, in 2020—have been awarded the annual fellowship, which provides funding for researchers studying the field of Alzheimer’s disease or other neurodegenerative dementing illnesses.

‘Time is of the essence’

The idea for the fellowship started when James and Nancy Carpenter, both graduates of Indiana University, were working on their estate plan. They had money set aside for IU School of Medicine research, and they wanted to honor Roush’s legacy.

“I thought, ‘Why are we waiting to donate this until after I die? Why is this in our will?” Nancy Carpenter said. “We should do it now, because time is of the essence.”

Researchers say the greatest known risk factor for Alzheimer’s disease is age, but there are also environmental, lifestyle and genetic risk factors that may contribute to the disease.

Not only did Roush have the disease, but so did her mom. The sisters started noticing signs in their mother when she was 70, and they remember seeing the disease take hold of their grandmother decades earlier, long before they knew much about Alzheimer’s. 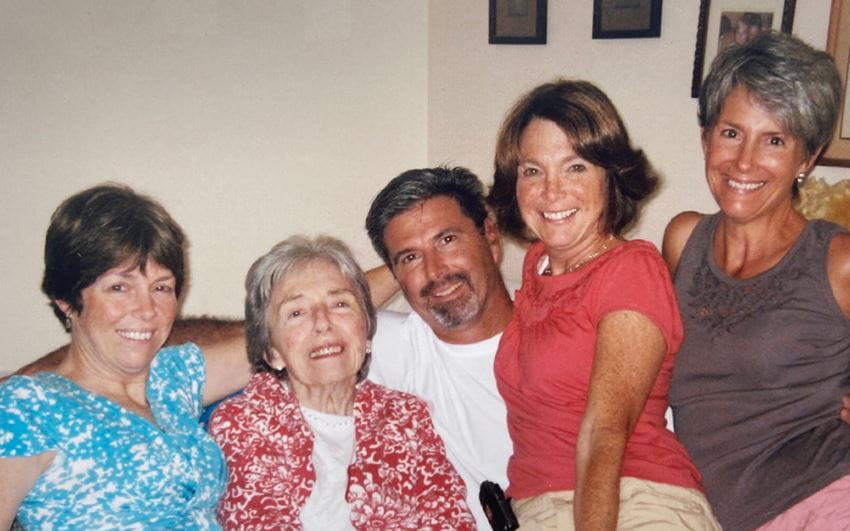 “Our mom agonized through seeing her mother with the disease, and we saw her fear that this would happen to her,” Carpenter said. “And it did, sadly.”

Carpenter and Trauring said they’re cognizant about the disease’s link to their genes.

“When I forget a name, when I forget something or I miss a date, it’s like, oh my gosh, it’s starting,” Carpenter said. “It’s an inherent little fear that’s kind of in the back of your mind.”

Trauring said if she’s diagnosed with Alzheimer’s disease, she will be more concerned knowing that her children will suffer as caregivers than about the pain she would endure.

Carpenter said she and her sister try to live healthy lifestyles through regular exercise and eating heart-healthy food.

“They say if it’s healthy for your heart, it’s going to help your brain in the long run,” Carpenter said. “That’s all we can do right now.”

The support from this funding has helped launch research careers for fellows who are selected. Karahan initiated her research based on a recent human genetics study on a mutation identified in Alzheimer’s disease patients. Researchers studied more than 85,000 humans—fewer than half of whom were Alzheimer’s patients—and concluded this mutation increased the risk of late-onset Alzheimer’s.

Since the study focused on humans, that intrigued Karahan. She wanted to understand the function of the gene in the brain, specifically its role in amyloid pathology and microglia—the brain’s immune cells. 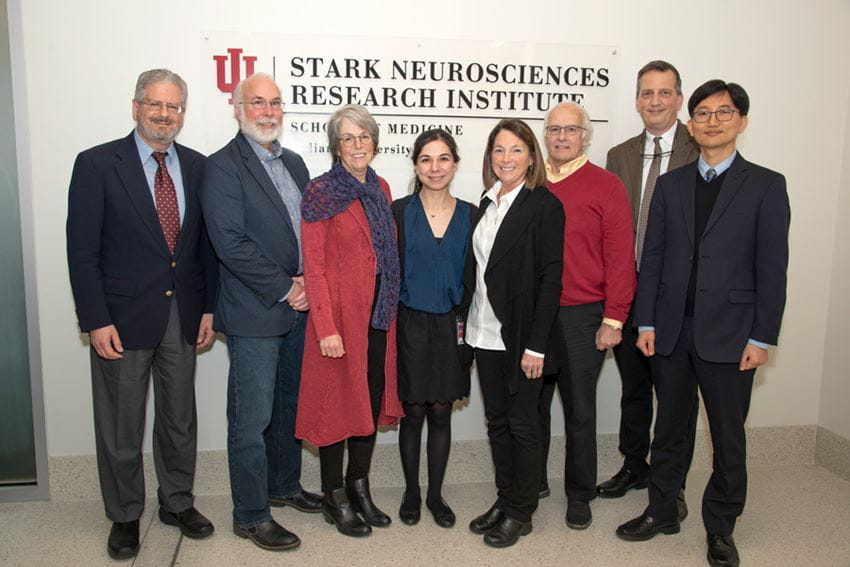 “The main purpose of doing my research is to help people,” she said.

Amyloid plaques are commonly found in the brains of patients with Alzheimer’s; amyloid beta proteins clump together and form plaques, which destroy nerve cell connections.

Karahan started her research with a mouse model, deleting the risk gene in an Alzheimer’s disease mouse model. She also tested the functions of the gene in microglia in cell cultures.

Through all of her experiments, Karahan consistently found that modulation of this gene affected amyloid plaques and microglia in the mouse’s brain.

Thanks to the work done during her fellowship, Karahan received a grant from a NanoString, a research technology company, to further her research. She also received multiple awards for her work at IU, and plans on applying for NIH and Indiana Clinical and Translational Sciences Institute grants.

MacPherson and Puntambekar, as Roush fellows, each analyzed differences between two types of immune cells, microglia and macrophages, and investigated to see if manipulating the cells might clear brain plaques. Both have continued their research, and Puntambekar applied for a NIH grant last year based on what she learned through the fellowship.

For 2020, Yu’s research is titled: “A multilayer network model of brain connectome disruption in Alzheimer’s disease: Role of the transcriptome and pathological proteins.”

As the first Roush fellow, Puntambekar met with the Carpenters before she began her research. They gave her a photo of Roush and a certificate, which she still has to this day.

“It was something that funded a very new researcher in the field of Alzheimer’s disease, which gave me the freedom to test out my hypotheses and build on a concept,” she said.

Karahan had just began her position at Stark Neurosciences Research Institute when she applied for the Sarah Roush Fellowship. A native of Turkey, Karahan came to the U.S. in 2017 as a postdoc researcher at the Mayo Clinic, working for the laboratory of Jungsu Kim, PhD. Kim moved his laboratory to IU School of Medicine several months later in 2018.

As she was looking for grant opportunities to support her research, Karahan, who has a postdoc visa, saw that the Sarah Roush fellowship didn’t exclude non-U.S. citizens or permanent residents. Most fellowships nationally only allow citizens or green card holders to apply, Karahan said.

Carpenter said that the inclusivity of the fellowship is reflective of her mother’s character.

“Mom would be thrilled that she, in her name, had a very welcoming way to bring people from all sorts of backgrounds,” Carpenter said. “She was very open-minded and curious about people and cultures.” 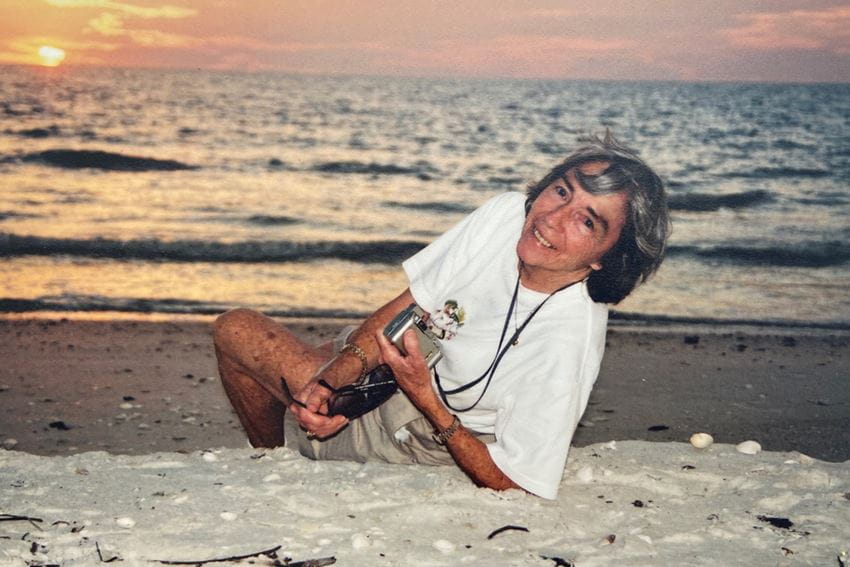 Science was important for Roush, Carpenter said. She worked a laboratory technician in a hospital, and Carpenter remembers her mother keeping them up as kids to watch the moon landing in 1969. When Roush died, her brain was donated to science at IU School of Medicine.

“She was one of those moms who wanted to teach us about science and nature,” she said.

That passion and faith in science led to similar routes for Carpenter and Trauring in school. Carpenter majored in biology at IU and later focused on ecology and teaching. Trauring, also a graduate of IU, earned a degree in medical technology and worked in laboratories.

Karahan said knowing the story behind the fellowship and meeting with the donors—the Carpenters and the Traurings—made her realize the lasting impact of her work.

“When I presented my research, I saw the same excitement and enthusiasm in their eyes—that affected me and motivated me so much,” she said. “I can definitely say it was one of the most valuable, precious times in my life.”