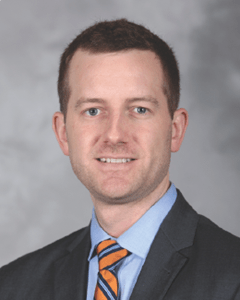 When Kyle Frick, MD, was a fellow in interventional cardiology here at IU, he and his wife became parents to twin boys. The twins were born at 26 weeks gestation, and required a long NICU stay.

Despite challenges like these, Frick has been undeterred from success. He joined the faculty in 2018 and is board certified in interventional cardiology, cardiovascular disease, echocardiography and internal medicine.

Raman, who is director of the Division of Cardiovascular Medicine, cited Frick’s interdisciplinary work on improving cardiovascular care and research for patients with advanced liver disease, as well as his “ever-expanding” portfolio of manuscripts and grants.

“We are grateful to have him on our team,” she said.

Frick is grateful to be at IU, as well.

Originally from Avon, Frick completed his undergraduate and medical school training at IU. He then completed his residency at University of Texas Southwestern Medical Center before returning to IU for his fellowship, during which he served as chief fellow.

“I joined the faculty here because I’m passionate about improving health in our state and training future leaders in medicine,” he said.

His favorite aspects of his job are taking care of his patients, teaching and discovering things through research, he said.

“Working with Dr. Frick on new research at the intersection of informatics and cardiology, I have been impressed by his enthusiasm, drive and motivation,” said colleague and mentor Titus Schleyer, PhD. “Within six months, he wrote his first R01 grant application with our team, and we are now set up for additional work on the project through his participation in the ASPIRE program.”

As a newly-named ASPIRE scholar, Frick will work with the Regenstrief Institute to improve the health information exchange and electronic health record for cardiology providers. He also recently received the Dr. Charles Fisch Cardiovascular Research Award, which will allow him to create a biobank composed of myocardial tissue and blood specimens focused on cardiovascular disease in patients with cirrhosis.

Additionally, he recently completed a study with the American College of Cardiology with compelling findings.

“We found that removing the commonly cited barriers of cost and lack of transportation significantly improved cardiac rehabilitation participation in patients with coronary artery stenting and/or myocardial infarction, a class 1 recommendation for these patients which is significantly underutilized,” he said.

Even in light of all these significant professional achievements, Frick says that, to date, he’s proudest of the teaching awards he received first as a resident at UT Southwestern, and last year as a faculty member at IU.

This recognition–and his impressive track record–are a testament to his personal ethos and advice to learners who are interested in pursuing interventional cardiology:

“Independent of anything else,” he said, “if you work harder and read more than everyone else around you, then you will no doubt be successful.”